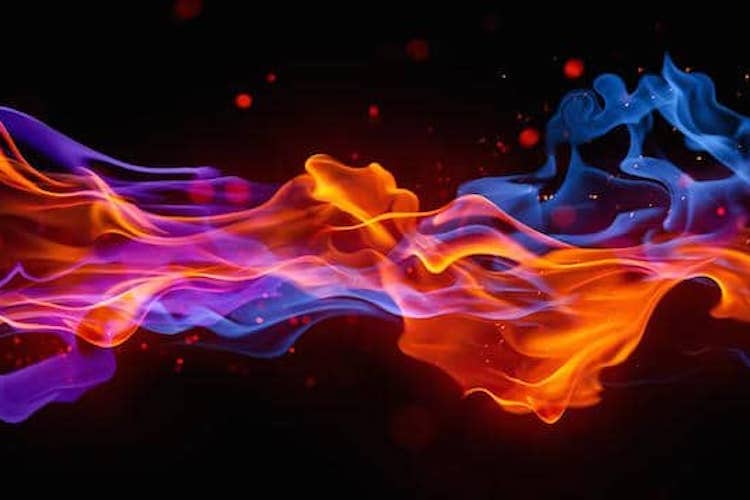 Alchemy is the art of transformation. Self-inflicted alchemy is the art of transforming self-preservation (lead) into self-overcoming (gold). It’s “inflicted” because the process is uncomfortable at first. One must leave one’s comfort zone to grow. One must take an independent leap of courage out of a codependent state in order to understand that one’s true essence is an interdependent state in interconnectedness with all things.

In order to become comfortable with self-improvement one must first be uncomfortable with the initial growth. Eventually, the next-level technique of existential masochism can be used, and the discomfort will be instantly reconciled into comfort. But first, self-inflicted alchemy is necessary.

You can call it shock value, a wake-up call, ruthless initiation, or vigilant vicissitude, either way it is self-inflicted when used as a tool toward leveraging a leap of courage. And it is alchemical when a thesis of self and an antithesis of self are separated and then integrated into a more robust, more resilient, more antifragile synthesis of self.

As such, self-inflicted alchemy can be broken down into three key transformations (or praxis): separating healthy from unhealthy, separating rigidity from resilience, and separating uncertainty from certainty. Let’s break it down…

“A healthy mind requires a healthy body, which together depend on a healthy society in harmonious relation to the earth.” ~Louis G. Herman

A common alchemist phrase states: solve et coagula, et habebis magisterium! (Dissolve and bind and you will have the magistery!). The dissolution of the self is similar. The self in relation to cosmos is itself a separation. We must understand that although we are actually one with everything, and everything is connected to everything else, we are also perceptually one single individual. And the individual must be healthy to actualize the whole (self-actualization).

Survival requires health. Health requires first separation, then purification, and finally, coagulation. This is an alchemical process. It becomes self-inflicted when we apply it to ourselves despite discomfort.

In order to remain healthy, the first thing we need is oxygen. Without oxygen the individual will die within a few minutes. The next thing we need is water, then food, then human companionship, and so on and so forth up Maslow’s Hierarchy of Needs. But without these basics we become sick, unhealthy, or we could even die.

Thus, we can declare, conclusively, that going without (or breathing polluted) oxygen, (drinking polluted) water, (eating polluted) food, and (mingling with polluted) human companionship is fundamentally unhealthy. But ironically, and counterintuitively, it is only when we separate the self from the needed element that it really sinks in exactly how healthy/unhealthy it is. For example: when we hold our breath, or when we do breathing exercises, or when we fast, or when we go too long without human contact. The separation accentuates the need. And controlled separation (like fasting or solitude) can be healthier for the individual.

Keep in mind that most citizens of the profoundly sick society have been brainwashed to believe that polluted air, water, food, and even minds, is just “the way it is,” and so they will typically be apathetic or even willfully ignorant regarding the fundamental difference between healthy and unhealthy in relation to society. But, as Krishnamurti said, “it’s no matter of health to be well adjusted to a profoundly sick society.”

After separation and purification (or reconciliation), there is coagulation (or coalescence). We must separate the self from its codependence in order to become independent enough to purify our unhealthy relationships, and to become aware enough to integrate it all in a harmonious interdependence (coagulation).

Healthy and harmonious interdependence cannot be obtained from an unhealthy codependent state that’s unaware of what is healthy or not. There must be a separation (a leap of courage) in order for there to be a purification (resolving of unhealthy habits through healthy action) in order for there to be coagulation (reintegration of the healthy individual as a vital catalyst for the interdependent whole).

In a changing universe, it is unhealthy to willfully remain the same. As it goes, only human beings are crazy enough to be so intransigent. We cling to the known, to our cultural conditioning, to our stifling comfort zones. We become stuck. We become hardened and brittle. We are then unable to adapt and overcome. Our rigidity becomes a severe inflexibility.

The only way out is for the center to come unglued and for the delusional foundation to collapse in on itself. This tends to happen after years of repression and willful ignorance, and can be quite dangerous: psychologically, spiritually, even existentially. In the long run, such willful ignorance reinforces self-preservation at the expense of self-overcoming, and at the even greater expense of an unlived life.

Through the use of self-inflicted alchemy, however, we can maintain resilience like a cloak of flexibility that wards off rigidity.

If we separate what’s transformative from what’s not, we discover the difference between what we can control and what we cannot. Just because gravity is rigid on a planet rotating around a star at a certain speed, doesn’t mean we can’t be flexible regarding it (airplanes, parachutes, elevators). And we should definitely not be rigid regarding it.

Rigidity leads to repression which leads to de-evolution and a string of mental illnesses and anxieties. We would have gotten nowhere as a species had we remained rigid and dogmatic and parochial in our perspective. Resilience and flexibility leads to robustness and antifragility.

We purify our rigidness and inflexibility by being proactive and self-improving regarding things that we can control, and then going with the flow regarding the things that we cannot. This leads to creativity, innovation, deep imagination, and progressive evolution (coagulation and coalescence).

We prevent rigidity and maintain resiliency by understanding what is self-transformative and what is not, purify through flexible self-improvement, and then coagulate through innovation and progressive evolution. This way, self-overcoming becomes the default rather than the rigidness of self-preservation.

When it comes to truth and the truth quest, validity matters. The problem is that humans are a fallible species. We are prone to mistakes. We often misinterpret reality and become victims of invalidity. What is valid and what is not, like with the concept of what is healthy and what is not, isn’t a matter of opinion. Rather, it is dictated by reality, which is uncompromising with its universal laws. It is our responsibility alone to interpret these laws correctly. The problem is that most of us are irresponsible with our interpretations.

Certitude and blind belief are the main culprits of this irresponsibility. Whether due to cultural conditioning, religious indoctrination or political programming, certainty and blind belief lead to willful ignorance toward universal laws.

Better not to be certain. Better not to believe. Better to be open and uncertain, questioning authority, than to be closed and certain, believing in authority. Again, this is the responsibility of each individual. Validity can never be gleaned until the individual dares to challenge authority its hand-me-down truth.

Remember: humans are fallible and imperfect, to include humans with authority. So the only way to discover truth—indeed, the only way to keep the truth quest going—is to question the truth enforced by any authority, no matter its rank and file.

But first, in order to question the truth, the individual must be okay with uncertainty. They must be able to drop all pretense, to stand with their soul naked against a meaningless universe and dare to question their own programming so as to become open enough to reprogram the truth quest.

In the end, self-inflicted alchemy is the art of transforming the unhealthy, rigid, and certain self into a healthy, flexible, uncertain self with the capacity to resist self-preservation and the wherewithal to embrace self-overcoming for the sake of self-improvement, and for the sake of a healthy and progressive evolution for our species.