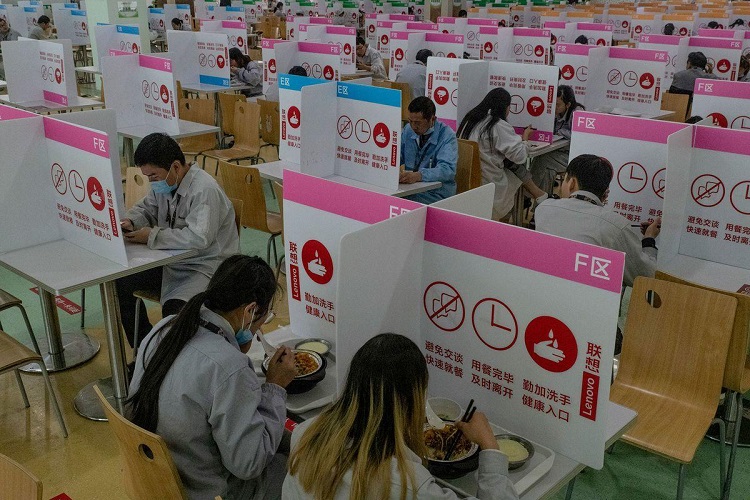 The industrial hub of over eleven million people and ground zero for the global outbreak, Wuhan, has come roaring back to life but more in the way of a dystopian version of itself after the virus peaked there in February and now with almost no new infections occurring according to official numbers.

Under strict lockdown since late January as the virus ripped through the original ‘hot zone’ epicenter of Hubei province, the capital city provides a glimpse of what hard-hit urban centers in the West may look like in a new post-lockdown world.

“So far, Wuhan’s answer has been to create a version of normal that would appear utterly alien to people in London, Milan, or New York — at least for the moment,” Bloomberg writes. It’s a situation that appears ‘normal’ but with a totalitarian twist: “Bolstered by China’s powerful surveillance state, even the simplest interactions are mediated by a vast infrastructure of public and private monitoring intended to ensure that no infection goes undetected for more than a few hours.”

Just to get a major Lenovo tablet and phone factory on the outskirts of the city up and running again – previously closed for over two months – workers are first greeted by a series of four temperature checks. If flagged for even slightly higher than normal temperature (above 99.1F) they get referred to an in-house “anti-virus task force” to make determinations.

The steps the factory as well as businesses and offices across the city have taken are designed to spot any potential resurgence in infections a mere minutes after symptoms appear. And this is after returning employees have already been exhaustively tested for both the virus and antibodies before being able to go back to their place of work. And yet still, as Bloomberg describes, there’s a detailed regimen involved at every step of the day in the ‘new normal’:

Once cleared, they returned to work to find the capacity of meeting rooms built for six reduced to three and the formerly communal cafeteria tables partitioned off by vertical barriers covered in reminders to avoid conversation. Signs everywhere indicate when areas were last disinfected, and robots are deployed wherever possible to transport supplies, so as to reduce the number of people moving from place to place. Elevators, too, are an artifact of the Before Times; everyone now has to take the stairs, keeping their distance from others all the way.

Amid a surge in global demand for laptops and tablets given schools around the world have gone to remote learning, the Lenovo factory has added more than 1,000 workers since reopening operations, with over 10,000 employees on-site.

Head of Wuhan’s Lenevo operations Qi Yue told Bloomberg the entire factory would immediately shutter again should even one employee get coronavirus. “In my meetings with my staff I always tell them, ‘No loosening up, no loosening up.’ We can’t allow any accidents,” he said.

Ever worried also about asymptomatic spreaders which could could trigger a second wave, an elaborate electronic surveillance tracking system has also been erected and mandated for anyone wishing to take public transport, such as trains.

This is where scores of black-clad police officers will meet citizens, checking the app:

Police in black uniforms and medical masks seemed to be everywhere. “Scan your code!” they shouted at travelers approaching the departure gates. The public-private “health code” system that China developed to manage Covid-19, hosted on the Alipay and WeChat apps but deeply linked with the government, assigns one of three viral risk statuses — red, yellow, or green — to every citizen. It’s a powerful tool with clear potential for abuse. A green QR code, which denotes a low risk of having the virus, is the general default, while coming into contact with an infected person can trigger a yellow code and a mandatory quarantine. Red is for a likely or confirmed case.

It should be recalled too that politicians and tech companies in the West have batted around the idea of app-based ‘infection trackers’ and/or ‘immunity certificates’ and ‘special passports’.

Places like banks, restaurants, and coffee shops are opening back up, but with significant alterations, such as outdoor waiting areas, screening areas and temperature checks before going in, and often outdoor seating and dining.

One area the government has controversially maintained strict controls and curtailments on is funerals, out of concern that large family gatherings can reactivate COVID-19 spread, though critics of the policy say Chinese authorities are sensitive to political aspects to how the virus was handled, as Bloomberg describes:

Officially, no patients in Wuhan are still dying from Covid-19, but the treatment of those who did pass away remains an extremely sensitive subject. On Tomb-Sweeping Day in early April, when Chinese families traditionally gather to pay respects to their ancestors, Wuhan’s cemeteries were kept closed. Funerals have been banned until at least the end of the month, and family members of the dead have reported pressure from government officials to mourn quickly and quietly.

…But the restrictions also help Beijing avoid having funerals become a venue for people to vent anger about how the epidemic was handled, or to ask uncomfortable questions about subjects such as China’s true death toll.

The political anger is there beneath the surface, as a new FT piece also documents of “a small but tight-knit group of dissidents based in Wuhan who took it upon themselves to document the earliest days of coronavirus, a period that has become a closely guarded secret by China’s Communist party.”

They are angry not only over the slow reaction of government authorities in late December, of a lingering aggressive silencing of those who dared and continue to speak up.

As far as recovery in the West, and comparing the current crisis to the post-9/11 world, and how American relatively quickly recovered, Bloomberg notes, “It’s reasonable to think this time will be different.”

“Different” and with collective trauma on a larger scale because in the current societal crisis “Hardly anyone alive today has endured a pandemic this severe, and the basic problem it’s created — that anyone, whether friend, family, or stranger, might be a vector for lethal infection — is uniquely corrosive to the daily interactions that keep countries and economies going.”