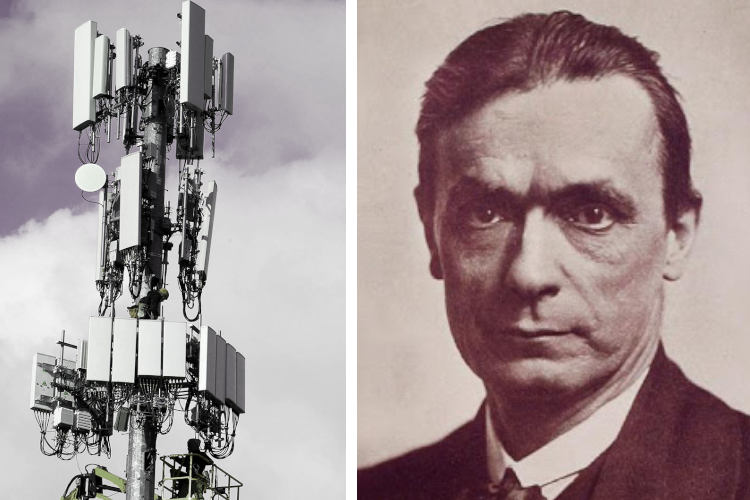 Having served as Vice President of the Physicians Association for Anthroposophical Medicine and as a founding board member of the Weston A. Price Foundation, Dr. Thomas Cowan is a leader in the field of alternative medicine.

As described on his website, “he has studied and written about many subjects in medicine…[including] anthroposophical medicine and herbal medicine.” Anthroposophy is a medical theory which posits an objective spiritual world that interacts with and influences our physical health and well-being.

According to the father of anthroposophy Rudolph Steiner, and as described by Cowan, a virus is an excretion of a cell which has become poisoned. From their unique perspective, a virus is not the cause of an illness, but merely a symptom. The cause of illness, according to an anthroposophist, is a disturbance in the electrical equilibrium of the body.

Leading up to 1918, radios had been distributed across the western world, casting their waves across large swaths of land. This, according to Cowan, was a major factor in the rise of the deadly Spanish Flu. More recently however, the amount of radio waves in the environment, ranging from WiFi to cell phone towers to radar systems, has increased considerably.

“There has been a dramatic and quantum leap in the last six months with the electrification of the Earth. I’m sure a lot of you know what that is; it’s called 5G.”

“That is not compatible with health,” Cowan argues. In a way, he’s right. A study published in 2018 titled Wi-Fi is an important threat to human health concludes that exposure to Wi-Fi and EMF can contribute to several ailments including DNA damage, hormonal changes, a decline in male reproductive health, and cancer-causing oxidative stress caused by a rise in the level of peroxynitrites in the body.

“We are in an existential crisis here, folks. The likes of which humankind has never seen…This is something that is unprecedented, the putting of 100 thousand satellites in the very blanket of the Earth.” – Dr. Thomas Cowan

Although Cowan makes some very interesting points about viruses and 5G, mainstream science would not dare explore such an esoteric perspective on health and how the electric world around us affects the physical body. And Covid-19 continues to spread around the country, the US government is drafting a relief bill which just happens to include provisions to speed up the national rollout of 5G.

This article (Rudolf Steiner’s System of Anthroposophy Has a Unique Take on the Connection Between 5G and Viruses) as originally created and published by Waking Times and is published here under a Creative Commons license with attribution to Phillip Schneider and WakingTimes.com. It may be re-posted freely with proper attribution, author bio, and this copyright statement.