Cognitive Warfare and the Battle to be YOU 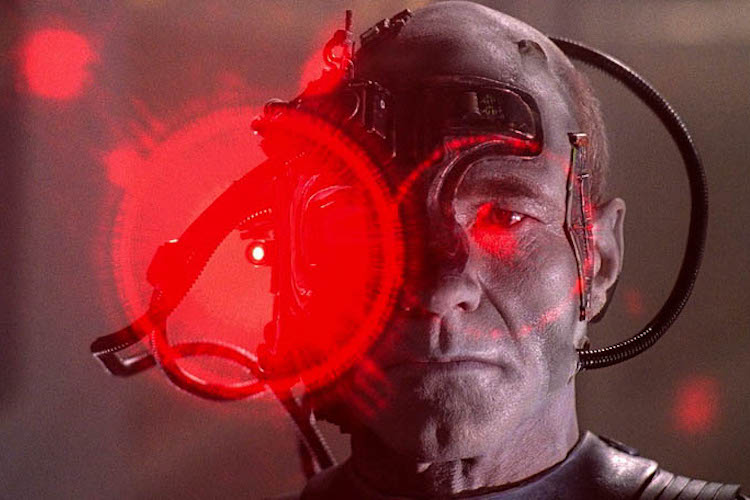 “The Master said, He who sets to work on a different strand destroys the whole fabric.” – Confucius, Analects II, 16

You must be assimilated.

More than ever before I feel the pull of the hive, and while it’s already been quite pressing over the last couple of years, we’ve tragically swapped out the nu-flu psychosis for something far more magnetic and dangerous… WAR FEVER!

The matrix demands that you pick a side. It won’t take no for an answer. You’re either with us or against us. Black or white only. Good vs. evil. Right vs. wrong. We’re right, they’re wrong.

Worst of all, though, it wants you to become the team, to supplant your personal identity for the comforting bosom of the herd. To lose yourself in something bigger.

It lies to you and tells you that it’s safer with the team, and that to be alone and sovereign in your own right makes you vulnerable, insecure and exposed. It already knows the secrets and science of the mind, and how to program you with self-defeating behaviors so that you’re easier to control and less likely to rebel, but the tricks it plays on you to get you to participate in the madness of the mob are growing more and more refined and diabolical.

Maintaining your individuality is becoming more difficult than ever.

The other day I was re-reading some documents about NATO’s pursuits in developing what it calls, ‘cognitive warfare,’ a new term to describe the military industrial complex’s declaration of war on the human brain. It wasn’t enough to control people with propaganda, censorship, mandates and bombs, so the new push will control your thoughts and behavior using a modern synthesis of psychology, neuroscience, nanotech, biotech, social sciences, data-harvesting, artificial intelligence, and the internet.

It’s really too much to comprehend. Think of it as Mind Control 2.0, and this time they’re throwing the whole book at you.

In these documents, the braintrust at NATO’s creative warfare division has come up with some great ways to articulate the purpose and need for looking at your brain (and everyone else’s) as a new theatre of war. Here are some of my favorite quotes:

“If kinetic power cannot defeat the enemy, psychology and related behavioural and social sciences stand to fill the void.”

“It will support the combat operations by providing potential courses of action for the whole surrounding Human Environment including enemy forces, but also determining key human elements such as the Cognitive center of gravity, the desired behaviour as the end state.”

“Today’s progresses in nanotechnology, biotechnology, information technology and cognitive science (NBIC), boosted by the seemingly unstoppable march of a triumphant troika made of Artificial Intelligence, Big Data and civilisational ‘digital addiction’ have created a much more ominous prospect: an embedded fifth column, where everyone, unbeknownst to him or her, is behaving according to the plans of one of our competitors.”

“Cognitive warfare is not only a fight against what we think, but it’s rather a fight against the way we think, if we can change the way people think… it’s much more powerful and it goes way beyond the information [warfare] and psyops.”

“Cognitive warfare seeks to change not only what people think, but also how they act… Attacks against the cognitive domain involve the integration of cyber, disinformation/misinformation, psychological, and social-engineering capabilities.”

“Cognitive warfare positions the mind as a battle space and contested domain. Its objective is to sow dissonance, instigate conflicting narratives, polarize opinion, and radicalize groups. Cognitive warfare can motivate people to act in ways that can disrupt or fragment an otherwise cohesive society.”

Executive Summary: We’re figuring out how to weaponize the internet and use the full power of all technologies to alter the way people think and how the brain works, so that we can more easily lord over an abusable class of automatons and robots who unconsciously carry out military orders while believing they are in control of their own thoughts and behavior.

There’s also an eye-catching phrase in these documents which I hadn’t previously heard before… “psychocultural warfare.” Hmmm… at face value it sounds like a way to create conflict amongst people by filling their heads full of nefarious BS… and guess what? That’s exactly what it is!

Psychocultural is defined as, “of or relating to the interaction of psychological and cultural factors in the individual’s personality or in the characteristics of a group.”

So, basically, psychocultural warfare is about weaponizing one’s relationship to themselves and to others. Great. This is more bad news for those of you seekers out there who are still determined to live an amazing life in this system of lies and illusions. It means there will be even more layers of manipulation to sort through in order to find your own sense of authority and purpose. Are you up to the challenge? I hope so.

As a self-sabotage coach I look at the repetitive negative messaging in one’s environment in search for clues about why they do what they do. Self-sabotage is almost always about the brain being in a distressed state so that it sinks into short-term thinking processes driven by the limbic system, which include processes related to emotion and motivation.

When the brain is operating on this lower level, the subconscious mind defaults to the short-term habits that offer instant gratification instead of long-term satisfaction. It’s why so many people are stuck in repetitive thought loops and destructive habits. It’s why life for so many in this world of opportunity finds us living out nothing but the lowest common denominator, the average, the median. Mediocrity. The brain is simply too taxed to muster the strength and courage needed to resist the tractor beam pull of social conformity.

Self-sabotage is truly epidemic today, which is no wonder when you consider just how much psychological and social manipulation we endure. Add to that the tremendous pressures on our most basic needs of security, self-esteem, and connection, and the chronic stress of always having some major crisis to fear. The natural reaction to an environment this hostile is to revert to self-protective behavior… self-sabotage.

And this is precisely the point of psychocultural warfare, cognitive warfare, and all the mind control in our world. To sideline you. To assimilate you into a weak, unhealthy and dysfunctional tribe. A tribe of non-protestors, or worse yet, a tribe of boot-lickers. Of broken people who cannot stand on their own, nor have any sense of self-determination.

“In the next 15 years, if large numbers of people don’t become consciously resistant to the overall mind control exerted on society, we’re going to see many more people who really truly resemble androids. People induce this themselves, by looking out at the world and saying, it’s too dangerous for me to tell the truth, or to say what I really believe, or express how I really feel. It’s much better if I fabricate a completely synthetic personality that’s going to sit back here and remain passive.” ~Jon Rappoport

It was Carl Jung who elucidated the idea of individuation, noting how mass conformity dangerously makes large groups of people susceptible to the manipulation and wickedness of psychopaths who would seek to dominate large groups of people. Jim Jones comes to mind. Also Hitler, but citing parallels with Nazi Germany is super blasé considering there are so many.

“Insofar as society is itself composed of de-individualized human beings, it is completely at the mercy of ruthless individualists. Let it band together into groups and organizations as much as it likes – it is just this banding together and the resultant extinction of the individual personality that makes it succumb so readily to a dictator. A million zeros joined together do not, unfortunately, add up to one.

Ultimately everything depends on the quality of the individual, but our fatally shortsighted age thinks only in terms of large numbers and mass organizations, though one would think that the world had seen more than enough of what a well disciplined mob can do in the hands of a single madman… People go on blithely organizing and believing in the sovereign remedy of mass action, without the least consciousness of the fact that the most powerful organizations in the world can be maintained only by the greatest ruthlessness of their leaders and the cheapest of slogans.”

Humans are designed to evolve, to progress, to move forward, and most importantly of all, to individuate, that is, to develop one’s uniqueness and authenticity so that you can be in this world without being of this world. It’s what the soul wants. It’s what makes us unique and interesting, and to give it all away is to forfeit our humanity to the psychopaths who just can’t stop working out ways to control and manipulate people.

To maintain your individuality, you will have to become more vigilant, more knowledgeable, and more determined than ever in order to prevent yourself from being swept away by the tidal wave of mass psychosis enveloping us. And we all need you to be strong and in control of yourself in the challenges we have coming at us.

I teach tools and techniques to help people free themselves from self-sabotage, so they can be active participants in creating the life they want, rather than living in endless cycles of disappointment and regret. Later this month I’m teaching a two session master class on the root causes of self-sabotage, on specific types of self-sabotage, and how to overcome this once and for all. You can register for that HERE, and I look forward to meeting you.

In the next essay I am going to look more deeply at what psychological individuation is and why it’s so important that you stand in opposition to the madness of today’s world. Stay tuned.

This article (Cognitive Warfare and the Battle to be YOU) was originally created and published by Waking Times and is published here under a Creative Commons license with attribution to Dylan Charles and WakingTimes.com. It may be re-posted freely with proper attribution, author bio, and this copyright statement.