“Not Now, Not Ever”: RNC To Sue Biden Over Vaccine Mandate As GOP Governors Go Ballistic 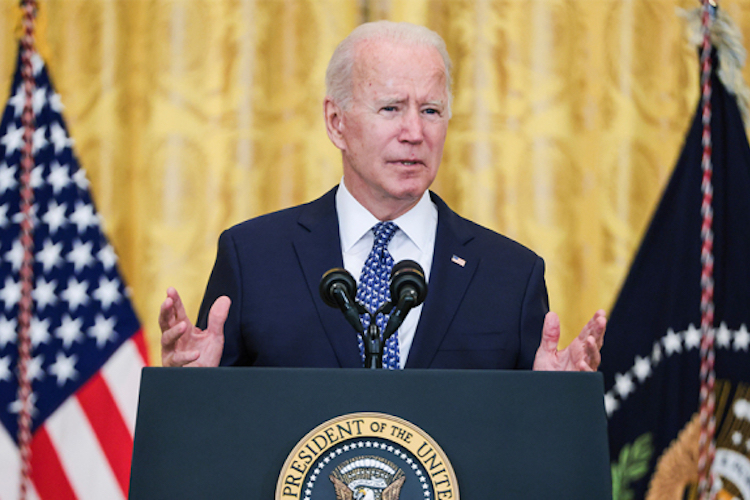 Republicans clapped back over the Biden administration’s unprecedented ‘jab or your job’ Executive Order for federal workers and contractors, and a ‘jab or test’ mandate for corporations with over 100 employees. 600,000 postal workers are oddly exempt.

The sweeping new vaccine requirements, which completely ignore tens of millions in America who have recovered from Covid-19 and have natural immunity, will affect as many as 100 million Americans.

“We’ve been patient but our patience is wearing thin and your refusal has cost all of us.” pic.twitter.com/Hj4jnmWpuX

In response, the Republican National Committed (RNC) vowed to sue Biden once the mandate goes into effect, with President Ronna McDaniel tweeting that Biden lied.

“Joe Biden told Americans when he was elected that he would not impose vaccine mandates. He lied,” McDaniel said in a statement, adding “Now small businesses, workers, and families across the country will pay the price.”

Joe Biden told Americans when he was elected that he would not impose vaccine mandates. He lied.

When his decree goes into effect, the RNC will sue the administration to protect Americans and their liberties. pic.twitter.com/XinwFw4bam

“President Biden is so desperate to distract from his shameful, incompetent Afghanistan exit that he is saying crazy things and pushing constitutionally flawed executive orders. This is a cynical attempt to pick a fight and distract from the President’s morally disgraceful decision to leave Americans behind Taliban lines on the 20th anniversary of 9/11,” Sen. Ben Sasse (R-NE) told the Daily Caller.

Meanwhile, Republican governors across the country have issued statements vowing to sue, or otherwise oppose, the vaccine mandate after Biden threatened them during Thursday’s announcement.

“Let me be blunt,” said Biden. “My plan also takes on elected officials in states that are undermining you in these life-saving actions. Right now local school officials are trying to keep children safe in a pandemic while their governor picks a fight with them and even threatens their salaries or their jobs. Talk about bullying the schools.”

“If they’ll not help, if these governors won’t help us beat the pandemic, I will use my power as president to get them out of the way,” he added.

Not so fast, say the governors

Republican governors have begun to issue their responses to the federal government’s overreach and the president’s threats.

“South Dakota will stand up to defend freedom,” Noem wrote. “JoeBiden see you in court.”

“I will pursue every legal option available to the state of Georgia to stop this blatantly unlawful overreach by the Biden administration,” Kemp tweeted.

“Oklahoma Gov. Kevin Stitt says as long as I am governor, there will be no government vaccine mandates in state,” Josh Caplan reported.

Once again, @POTUS has missed the mark. His outrageous, overreaching mandates will no doubt be challenged in the courts. Read my full statement below. #alpolitics pic.twitter.com/9BNbvenVEJ

Wyoming Governor Mark Gordon also issuing a statement saying: “Not now, and not ever.” 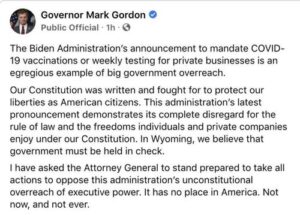 “The Constitution won’t allow this power grab, and in the meantime, I will stand up for all Tennesseans,” Gov. Lee wrote.

“This is not about freedom” is a phrase that should never come out of a U.S. President’s mouth.