Neuroscience and the ‘Sanskrit Effect’ 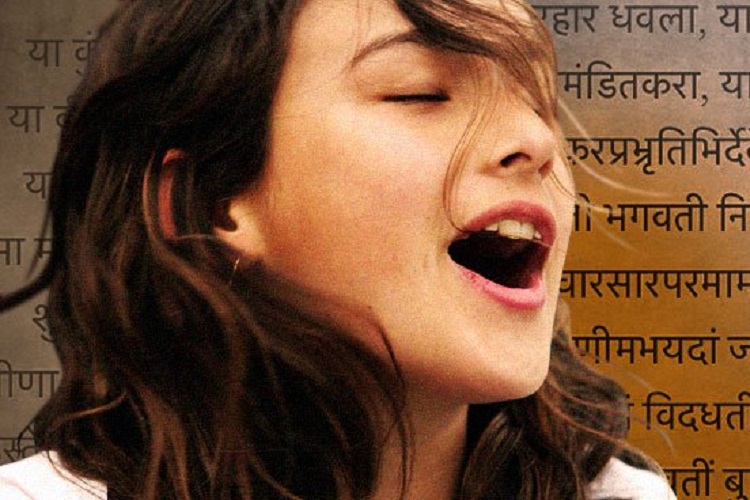 Science Proves the Power of Chanting

Many of us have heard the Gyuto Monks of Tibet. With their extraordinary chanting and low throaty drone of ancient sacred texts, they have kept audiences in the West spellbound with their long, careful and accurate recitations of potent Tibetan Buddhist texts. Sitting in their presence you feel a clarity, and a potent spiritual transference of energy and healing. The Buddhist tradition stems from India and the sacred language of Sanskrit. While Tibetan Buddhists have a rich chanting tradition, in India, this age-old tradition goes back even further.

Sanskrit scholars in India learn to chant ancient texts from a tender age. They chant simple mantras, Sanskrit poetry and prose, along with memorising and chanting the most ancient Sanskrit texts, including the Shukla Yajurveda, which takes six hours to chant. While those listening to these chantings receive the gift of the sacred texts they are sharing with us, the chanting of long texts does, in fact, have an amazing effect on the brain.

Neuroscience shows how rigorous memorising can help the brain. The term the ‘Sanskrit Effect’ was coined by neuroscientist James Hartzell, who studied 21 professionally qualified Sanskrit pandits. He discovered that memorising Vedic mantras increases the size of brain regions associated with cognitive function, including short and long-term memory. This finding corroborates the beliefs of the Indian tradition which holds that memorising and reciting mantras enhances memory and thinking.

Dr Hartzell, a Sanskrit devotee and postdoctoral researcher at Spain’s Basque Centre on Cognition, Brain and Language, spent many years studying and translating Sanskrit and became fascinated by its impact on the brain.

I noticed that the more Sanskrit I studied and translated, the better my verbal memory seemed to become. Fellow students and teachers often remarked on my ability to exactly repeat lecturers’ own sentences when asking them questions in class. Other translators of Sanskrit told me of similar cognitive shifts.

India’s Vedic Sanskrit pandits train for years to orally memorise and exactly recite 3,000-year old oral texts ranging from 40,000 to over 100,000 words. We wanted to find out how such intense verbal memory training affects the physical structure of their brains.

What we discovered from the structural MRI scanning was remarkable. Numerous regions in the brains of the pandits were dramatically larger than those of controls, with over 10 percent more grey matter across both cerebral hemispheres, and substantial increases in cortical thickness. Although the exact cellular underpinnings of grey matter and cortical thickness measures are still under investigation, increases in these metrics consistently correlate with enhanced cognitive function.

He reports that the right hippocampus of the scholars, a region that plays a vital role in short and long-term memory, and is specialised for patterns, such as sound, spatial and visual patterns, had more grey matter than the brains of the control subjects. The right temporal cortex, associated with speech prosody and voice identity, was also substantially thicker.

Dr Hartzell is not sure whether the effect relates particularly to the Sanskrit language and plans to conduct further research. The power of sound and chanting is becoming widely documented, and even short chants have an energising and healing effect on the body and mind of those who are chanting sacred mantras or verses. Interestingly, fifty years ago, a French scientist noted that Christian monks who chanted the Gregorian Chants have exceptional memories.

In 1967, Alfred Tomatis, a French physician, psychologist and ear specialist, studied the effect of chanting on Benedictine monks who had been part of a tradition with a strict schedule of daily chanting of up to eight hours a day. When a new abbott changed this schedule, cutting out the chanting, the monks became tired and lethargic, even though they were getting extra sleep. In fact, the more sleep they got, the more tired they were. Alfred Tomatis believed that the chanting was energising their brains and bodies, so he reintroduced the chanting and the monks were soon full of energy again.

Dr Hartzell’s recent study raises the question whether this kind of memorisation of ancient texts could be helpful in reducing the devastating illness of Alzheimer’s and other memory affecting diseases. Apparently, Ayurvedic doctors from India suggest it is the case and future studies will be conducted, along with more research into Sanskrit.

While we all know the benefits of mindfulness and meditation practices, the findings of Dr Hartzell are truly dramatic. In a world of shrinking attention spans, where we are flooded with information daily, and children display a range of attention deficit disorders, ancient Indian wisdom has much to teach the West. Even introducing small amounts of chanting and recitation could have an amazing effect on all of our brains.

Read Next: The Science Behind Healing with Sound

**This article (Neuroscience and the ‘Sanskrit Effect’) was originally published at Upliftconnect and is re-posted here with permission.**