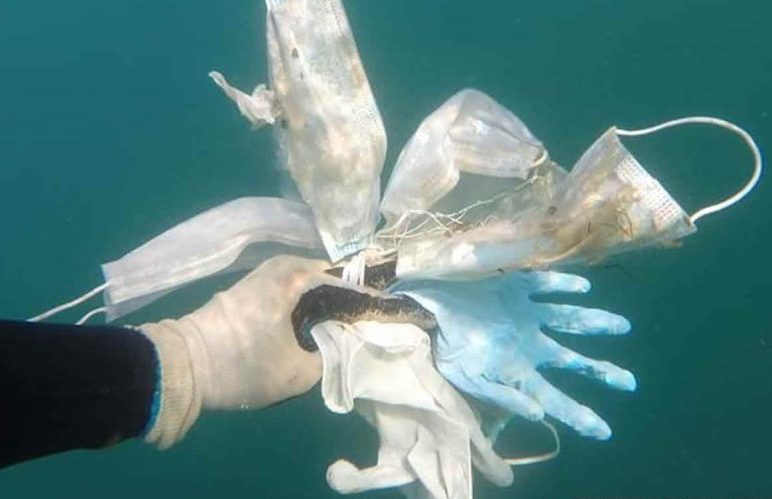 One of the impacts of the coronavirus pandemic has been the introduction of a new type of plastic waste in the form of single-use personal protective equipment (PPE).

Now, a study published in Proceedings of the National Academy of Sciences of the United States of America calculates for the first time how much of that waste is ending up in the oceans and what it is doing once it gets there.

“The Covid-19 pandemic has led to an increased demand for single-use plastics that intensifies pressure on an already out-of-control global plastic waste problem,” study co-authors Yiming Peng and Peipei Wu from Nanjing University told The Guardian. “The released plastics can be transported over long distances in the ocean, encounter marine wildlife, and potentially lead to injury or even death.”

The Nanjing University and University of California (UC), San Diego-led research team looked at waste generated between the beginning of the pandemic in 2020 and August 2021, according to a UC San Diego press release. All told, the study found that 193 countries have generated more than 8.4 million tonnes (approximately 9.3 million U.S. tons) of COVID-specific plastic waste since the pandemic began, and 25,900 tonnes (approximately 28,550 U.S. tons) of that ended up in the world’s oceans.

The findings were based on a model that calculated how the pandemic would impact the amount of plastic released into the ocean from the land and where it would go from there.

“The model simulates how the seawater moves driven by wind and how the plastics float on the surface ocean, degraded by sunlight, fouled by plankton, landed on beaches, and sunk to the deep,” study co-author Yanxu Zhang, also from Nanjing University, said in the press release. “It can be used to answer ‘what if’ questions, for example, what will happen if we add a certain amount of plastics to the ocean?”

The answer is that, within three to four years, a large portion of the pollution will end up either on beaches or the seabed, with a smaller amount reaching the open ocean where it could end up in gyres or a plastic accumulation zone in the Arctic Ocean.

Further, the study looked at the main sources of pandemic-related waste. Regionally, 46 percent came from Asia, 24 percent from Europe and 22 percent from the Americas, The Guardian reported. Interestingly, the bulk of this waste is not coming from individual use of PPE, which only accounted for 7.6 percent of the total. Instead, the bulk of the waste came from hospitals, at 87.4 percent.

“When we started doing the math, we were surprised to find that the amount of medical waste was substantially larger than the amount of waste from individuals, and a lot of it was coming from Asian countries, even though that’s not where most of the COVID-19 cases were,” study co-author Amina Schartup, an assistant professor at UC San Diego’s Scripps Institution of Oceanography, said in the press release. “The biggest sources of excess waste were hospitals in areas already struggling with waste management before the pandemic; they just weren’t set up to handle a situation where you have more waste.”