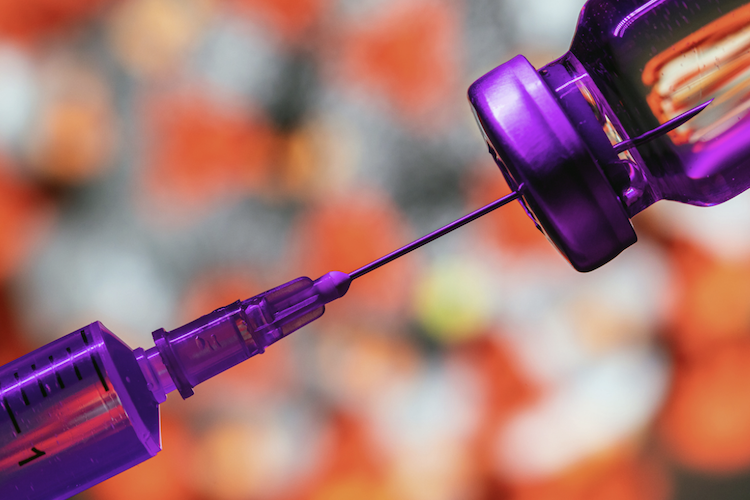 Data released Sept. 17 by the Centers for Disease Control and Prevention (CDC) showed that between Dec. 14, 2020 and Sept. 10, 2021, a total of 701,561 adverse events following COVID vaccines were reported to the Vaccine Adverse Event Reporting System (VAERS). The data included a total of 14,925 reports of deaths — an increase of 419 over the previous week.

There were 91,523 reports of serious injuries, including the reports of deaths, during the same time period — up 3,352 compared with the previous week. 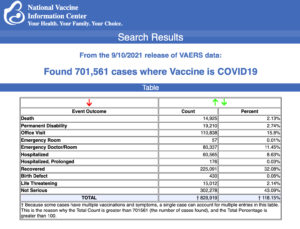 The data come directly from reports submitted to VAERS, the primary government-funded system for reporting adverse vaccine reactions in the U.S.

The most recent deaths involve one report of two patients [VAERS I.D. 1655100] who died after their second dose of Pfizer, including a 13-year-old female.

Other recent reported deaths include a 15-year-old boy (VAERS I.D. 1498080) who previously had COVID, was diagnosed with cardiomyopathy in May 2021 and died four days after receiving his second dose of Pfizer’s vaccine on June 18, when he collapsed on the soccer field and went into ventricular tachycardia; and a 13-year-old girl (VAERS I.D. 1505250) who died after suffering a heart condition after receiving her first dose of Pfizer.

On Sept. 17, a panel of scientific advisors to the U.S. Food and Drug Administration (FDA) voted 16 to 2 against recommending a third shot of Pfizer’s COVID vaccine for healthy people 16 and older, but voted unanimously in favor of recommending the booster shot for the immunocompromised and all people 65 or older.

The vote came after a sharp debate in which many of the panel’s independent experts, including infectious disease doctors and statisticians, challenged whether the data justified a broad rollout of extra shots when the vaccines appear to still offer robust protection against severe COVID-19 disease and hospitalization, at least in the U.S.

Officials at the FDA previously had expressed skepticism about the need for Pfizer COVID vaccine booster shots in a 23-page document released Sept. 16, prior to the meeting, on the agency’s website.

The report analyzed data submitted by Pfizer and BioNTech as part of the drugmakers’ request for authorization for their vaccine to be given as a booster shot in people 16 years and older. FDA officials said, based on their analysis of data submitted by Pfizer and BioNTech, they could not yet take a stance on whether to recommend COVID boosters for the general public.

Sarah Green was a healthy 16-year-old until she developed neurological problems after receiving her second dose of Pfizer’s COVID vaccine. In an exclusive interview with The Defender, Sarah (VAERS I.D. 1354500) and her mother, Marie Green, said they feel helpless because nobody will acknowledge Sarah’s vaccine injury and “nobody can help them.”

Sarah received her second dose of Pfizer on May 4, and immediately began experiencing headaches. She then developed facial twitches and tremors, lost the ability to write, cannot drive and had to drop two college classes, Green said.

Sarah has seen numerous doctors who refuse to acknowledge the vaccine caused her condition. One doctor said Sarah had functional movement disorder and it was not related to the vaccine — although she said she has seen more cases since COVID vaccines were approved because people “stress themselves out over the vaccine and it’s psychosomatic.”

Green said she and Sarah are not anti-vaxxers, but there are too many people having problems for them not to know there’s a problem with mRNA vaccines.

Imogen Allen, 22, developed two blood clots in her lungs after receiving Moderna’s COVID vaccine and will be on blood thinners for the rest of her life, the Daily Mail reported. Allen was diagnosed with a bilateral pulmonary thromboembolism after collapsing while on a family vacation two weeks after being vaccinated.

Allen was told by doctors the clots could have been triggered by the vaccine alongside five years on the contraceptive pill. Allen, a champion show jumper, may never be able to ride a horse again and her dreams of becoming a police detective were dashed after she was left bedbound.

“I was always wary of something happening, and it just shows that I had every right to be, because look at me now,” Allen said.

Babies could be given COVID vaccines in U.S. this winter

Pfizer’s COVID vaccine could be rolled out to babies as young as 6 months in the U.S. this winter — under plans being drawn up by the pharmaceutical giant.

According to the Daily Mail, Pfizer plans to apply for authorization to immunize American infants within the next two months, although the timeline will depend on findings of in-house trials that assess safety and efficacy of children aged six months to 5 years.

“We would expect to have … data for children between the ages of 6 months and 5 years old that we would file with the FDA,” D’Amelio said at the Morgan Stanley Global Healthcare Conference. “I’ll call it in the weeks shortly thereafter the filing of the data for the 5- to 11-year-olds.”

Pfizer plans to seek approval from the FDA for the shots to be given in children aged 5 to 11 by October.

According to a new pre-print study, healthy boys between the ages of 12 and 15, with no underlying medical conditions, were four to six times more likely to be diagnosed with vaccine-related myocarditis than they were to be hospitalized with COVID.

To identify children with evidence of cardiac injury, researchers reviewed reports submitted to VAERS of adolescents between the ages of 12 and 17 who received an mRNA COVID vaccine.

The researchers identified a total of 257 cardiac adverse events (CAE) using the CDC’s working case definition of myocarditis, and found the post-vaccination CAE rate was highest in 12- to 15-year-old boys following their second dose of Pfizer. About 86% of the boys affected required hospital care, the authors said.

At current U.S. infection rates, the risk of a healthy adolescent being taken to the hospital with COVID in the next 120 days is about 44 per million, they said.

There is a growing body of literature that shows natural immunity not only confers robust, durable and high-level protection against COVID, but also provides better protection than vaccine-induced immunity.

Yet, the CDC is ignoring the science of natural immunity when it comes to COVID, while acknowledging it for other diseases, said Dr. Marty Makary, professor of surgery and health policy at Johns Hopkins University. On Sept. 14, Makary said on the “Clay Travis and Buck Sexton Show,” the agency is providing contradictory, “illogical” COVID messaging. He accused the CDC of “cherry-picking” data and manipulating public health guidance surrounding vaccines and natural immunity to support a political narrative.

Makary explained how the CDC’s current guidance for chickenpox, for example, does not encourage those who have contracted it to vaccinate themselves against the virus. The CDC only recommends two doses of chickenpox vaccine for children, adolescents and adults who have never had chickenpox.

Makary called the conflicting guidance “absolutely illogical,” and accused the agency of “ignoring natural immunity.” He added the CDC is engaging in a statistical technique called “fishing,” where “you look for a tiny sliver of data that supports what you already believe.”

Despite multiple phone and email communications with many people at the CDC, and despite being told that our request was in the system and that someone would respond, we have not yet received answers to any of the questions we submitted. It has been 194 days since we sent our first email to the CDC requesting information.