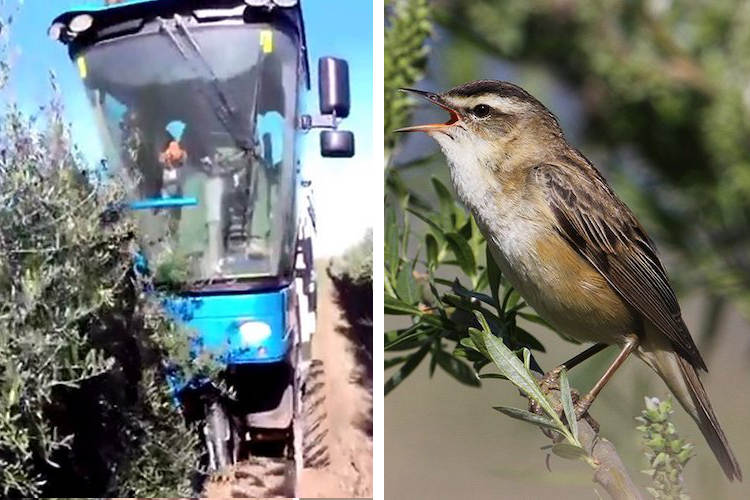 The practice of mechanized olive harvesting kills millions of legally protected birds each year in Spain, Portugal, Italy, and France. Among the greatest casualties include robins, greenfinches, wagtails, and warblers, according to research from Portugal’s Institute for Nature Conservation and Forests.

These birds like to roost in olive bushes at night, but this is also when olive farmers typically harvest their fruit, as cooler night time temperatures help to preserve the olive’s flavor.

“The machinery is perfectly fine if used during the day, as birds are able to see and escape while they are operating. However, during the night they use very strong lights which confuse the birds and lead to their death as they are ‘sucked in’ by the tractor,” says Vanessa Mata, a lead researcher at the Portugal-based Research Centre in Biodiversity and Genetic Resources.

Harvesting occurs from October to January and can eliminate as many as 100 birds per trailer. In the Spanish region of Andalusia alone, an estimated 2.6 million birds are killed each season. Ninety-six thousand are taken by nocturnal harvesting in Portugal, while France and Italy do not yet have estimates, but do engage in the practice.

“Numbers of farmland birds in Europe have plummeted by 55 per cent over the last three decades and this is another shocking example of how modern agricultural practices are impacting our bird populations, including some UK species passing through the region.” – Martin Harper, Director of Conservation at the Royal Society for the Protection of Birds

Many of the birds being sucked up by high-intensity farming equipment are classified as “resting species” by the European Bird Directive.

The Olive Oil Times reports that “a good part of these birds are sold by the operators to the rural hotel industry for consumption. This practice is illegal and highly condemned by the Ministry of Health,” says the Andalusian government.

Officials in Andalusia have spoken against the “massacre,” but conservationists warn that if no legislation is passed, the practice will continue unabated.

“Local governments and local, national and international communities urgently need to assess the impact of the practice and take steps to end it.” – Vanssa Mata

According to Harper, there are 421 fewer bird species in Europe than there were 30 years ago. However, he believes that the decline could be stopped with the right policies.

“We do know that sustainably managed olive grows are not only possible but very beneficial to wildlife and we need to encourage those.” – Martin Harper

This article (Mechanized Olive Farming Killing Millions of Songbirds Every Year) as originally created and published by Waking Times and is published here under a Creative Commons license with attribution to Phillip Schneider and WakingTimes.com. It may be re-posted freely with proper attribution, author bio, and this copyright statement.