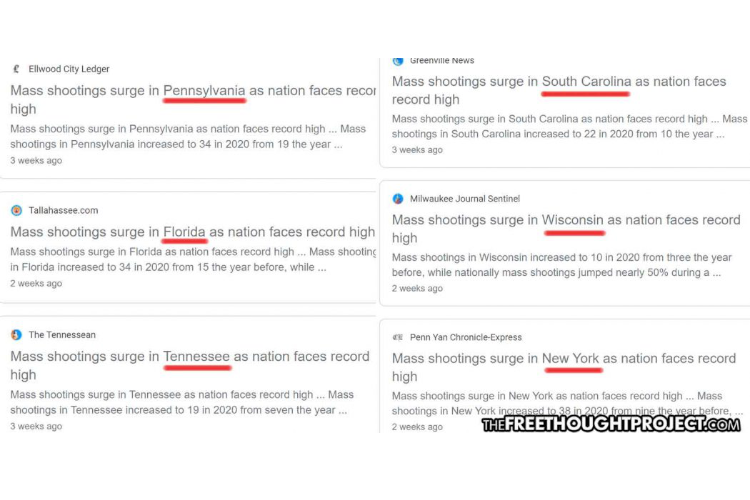 In case you haven’t noticed, after taking a hiatus during the COVID-19 lockdowns, mass shootings are back in the limelight and the establishment media can’t wait to use them to their advantage. In fact, they have already started.

One of our researchers here at the Free Thought Project, Don Via, Jr. discovered an oddity this week consisting of headlines that were identical in content but written for various states and published by entirely different news outlets. If you Google, “mass shooting surge,” you will be returned results with exactly the same headlines, but for different states.

The headline reads follows: “Mass shootings surge in South Carolina as nation faces record high.” As you continue to scroll down the results, you see this exact same headline for other states like Florida, North Carolina, New York, Wisconsin, Pennsylvania, Tennessee, Colorado, Louisiana, Arkansas, Illinois, Michigan, and others.

In states which didn’t see a rise in mass shootings, a different title was used but with the exact same point. For example, “Mass shootings fall in Georgia, but nation faces record high.” This title was applied to states like George, Indiana, California, New Jersey, Oklahoma, Alabama, and others.

Identical headlines for what appears to be entirely different news outlets is definitely sketchy, but when you click the articles, you see that the text is identical with only numbers and state names plugged into them to tailor it to that specific state.

Below are a few examples:

Mass shootings in Florida increased to 34 in 2020 from 15 the year before, while nationally mass shootings jumped nearly 50% during a pandemic with crippling unemployment, violent protests and idle youth.

Mass shootings in Tennessee increased to 19 in 2020 from seven the year before, while nationally mass shootings jumped nearly 50% during a pandemic with crippling unemployment, violent protests and idle youth.

Mass shootings in South Carolina increased to 22 in 2020 from 10 the year before, while nationally mass shootings jumped nearly 50% during a pandemic with crippling unemployment, violent protests and idle youth.

Mass shootings in Wisconsin increased to 10 in 2020 from three the year before, while nationally mass shootings jumped nearly 50% during a pandemic with crippling unemployment, violent protests and idle youth.

The rest of the article follows a similar template with the authors simply filling in the names and numbers which apply to that state but pushing the identical narrative in each article.

At the end of every one of these articles, the second to last paragraph is a plug for gun control and the Biden administration’s plan for it.

police departments likely will have to step up their efforts to get the estimated 50 to 100 million illegal guns in the country out of circulation. The gun control measures often touted by President Joe Biden’s administration may also come into play, he said. These include measures aimed at keeping guns from people who are a danger to themselves or others, and creating a standard for gun storage.

It is important to point out that these news outlets are all under the USA Today Network and the articles are all written by the same two people, Marco della Cava and Mike Stucka. While it is certainly not surprising for a news network to push similar stories to its various outlets, the way this is done is not at all transparent.

Not one of these news outlets is named USA Today. Outside of the small text which says they are apart of the USA Today Network, they all appear entirely independent and have vastly different names like the Tallahassee Democrat or Greenville News, The Elmwood City Ledger, and The Chronicle Express.

When multiple news outlets, who put on the appearance of independence, all run the exact same piece which essentially calls for gun control by fear mongering over mass shootings, this is not a free press. This is a controlled press who is apparently being given narratives to push out to their readers based on some entity’s centralized vision.

Given the current draconian gun bans up for vote in Washington, the idea of a centrally controlled push for gun control by the mainstream media becomes that much more unscrupulous. Unfortunately, it is par for the course and USA Today is not alone in their tactics.

A compilation of the outlets regurgitating their talking points went viral and exposed dozens of media outlets all parroting the exact same script.

“Our greatest responsibility is to serve our [insert location here] communities. We are extremely proud of the quality, balanced journalism that [insert station here] produces,” the news anchors read from the script.

Then nine stations were featured on the screen and they all said in unison, “But we’re concerned about the troubling trend of irresponsible, one-sided news stories plaguing our country. The sharing of biased and false news has become all too common on social media.”

“More alarming, some media outlets publish these same fake stories… stories that just aren’t true, without checking facts first,” the videos continued, as at least 36 stations filled the screen at one time. “Unfortunately, some members of the media use their platforms to push their own personal bias and agenda to control ‘exactly what people think.’”

Then the video highlighted one important line that was parroted by each station:

“This is extremely dangerous to our democracy.”

One could make the argument, however, that news outlets reading a centrally controlled script to millions of people is a far greater threat to democracy than some conspiracy theorist spreading fake news.

As The Free Thought Project has reported, while there was once a time when the mainstream media was run by dozens of companies, it is now controlled by six corporations. Hundreds of channels, websites, news outlets, newspapers, and magazines — making up ninety percent of all media — is controlled by very few people—giving Americans the illusion of choice.

While six companies controlling most everything the Western world consumes in regard to media may sound like a sinister arrangement, the Swiss Propaganda Research center (SPR) released information in 2018 that is even worse.

The research group was able to tie all these media companies to a single organization—the Council on Foreign Relations (CFR).

In January 2018, WikiLeaks’ Julian Assange called attention to this control in an damning tweet.

For those who may be unaware, the CFR is a primary member of the circle of Washington think-tanks promoting endless war. As former Army Major Todd Pierce describes, this group acts as “primary provocateurs” using “‘psychological suggestiveness’ to create a false narrative of danger from some foreign entity with the objective being to create paranoia within the U.S. population that it is under imminent threat of attack or takeover.”

A senior member of the CFR and outspoken neocon warmonger, Robert Kagan has even publicly proclaimed that the US should create an empire.

The narrative created by CFR and its cohorts is picked up by their secondary communicators, also known the mainstream media, who push it on the populace with no analysis or questioning.

When looking at the chart from SPR, the reach by this single organization is so vast that it is no mystery as to how these elite psychopaths guide Americans into accepting endless war at the expense of their mothers, fathers, sons, and daughters.

While this may seem like a bleak scenario, the fact is that this battle over information is centuries old. Just as the Anti Federalists fought to inform early Americans over the dangers of a constitution without a bill of rights, those who’ve longed for freedom and liberty have continued this information war up into the 21st century — affecting massive changes in their wake.

Indeed, as Samuel Adams famously said, “It does not take a majority to prevail… but rather an irate, tireless minority, keen on setting brushfires of freedom in the minds of men.”

These brushfires have been so effective at maintaining the ideas of freedom that the establishment control over information has continued to clamp down to prevent them. We are currently witnessing this control increase at an ever accelerating rate.

Ideas that threaten the establishment, like calling out the corruption in both parties (alternative media) are quickly finding themselves in the cross-hairs of the Praetorian guard who wishes to keep the flow of information under the grip of the status quo.

Google, Facebook, Twitter, and others have all recently moved to clamp down the control even harder and outlets like TFTP have to fight tooth and nail just to survive — all the while, mainstream media can shove a single talking point down the throats of millions of Americans and disguise it as local independent media.

This is the very definition of “coordinated inauthentic behavior” which the tech companies pretend to be so hell bent on preventing, yet when it comes to pushing a narrative on gun control, these outlets are all given a pass. Must be nice.

If you would like to make sure we stay around to battle this behemoth, please consider becoming a member or making a one time donation at this link.