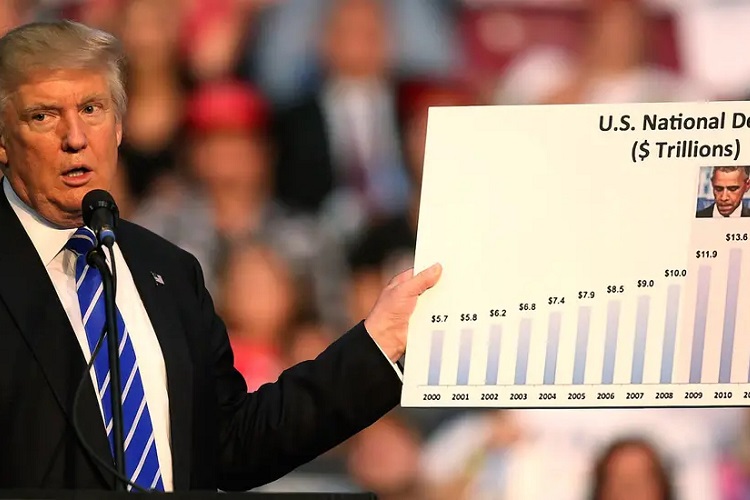 The fiscal 2020 budget shortfall totaled $3.13 trillion as the Trump administration added another $124.6 billion to the deficit in September, according to the latest Monthly Treasury Statement.

That more than doubles the previous record deficit of $1.4 trillion set during the Obama administration at the height of the Great Recession.

The national debt surged above $27 trillion on Oct. 1, and it has grown by over $7 trillion since President Trump took office. That equals $217,612 of debt for every American taxpayer.

The debt-to-GDP ratio currently stands at 137.21 percent. Despite the lack of concern in the mainstream, debt has consequences. Studies have shown that a debt to GDP ratio over 90 percent retards economic growth by about 30 percent. This throws cold water on the Republican mantra “we can grow ourselves out of the debt.”

A big chunk of the excess spending in FY2020 came courtesy of the $2.2 trillion CARES Act. But the Trump administration was already spending money at a near-record clip before the pandemic. The coronavirus spending simply exacerbated an already out of control federal spending problem.

Last year, the Trump administration ran a $984 billion deficit. At the time, it was the fifth-largest deficit in history. This goes to show that the federal government had a major spending problem before the pandemic. In fact, through the first two months of fiscal 2020, the deficit was already 12 percent over 2019’s huge Obama-like number and was on track to eclipse $1 trillion. Prior to 2020, the U.S. government had only run deficits over $1 trillion four times, all during the Great Recession. We were approaching that number prior to the pandemic, despite what Trump kept calling “the greatest economy in the history of America.”

No matter what happens in the 2020 election, the borrowing and spending will almost certainly continue unabated. The Democrats have proposed another $3 trillion stimulus plan. The Republicans have pushed for a slightly lower number. But as market analyst Peter Schiff said in a podcast, the Republicans have conceded the argument when it comes to a principled opposition to stimulus. The debate has devolved to how much to spend and where to spend it. “I knew the Republicans lost the argument the minute they accepted the false doctrine that stimulus is good,” Schiff said.

It’s easy to simply shrug off the debt. People have been warning about it for years. But it’s not a problem until it is. Debt is neither free nor is it irrelevant.

At some point, somebody has to pay for all this. As the saying goes – there’s no such thing as a free lunch. We are all on the hook for the massive bill. We (and our children and grandchildren) will pay for this down the road – either through higher taxes or higher inflation – most likely both.