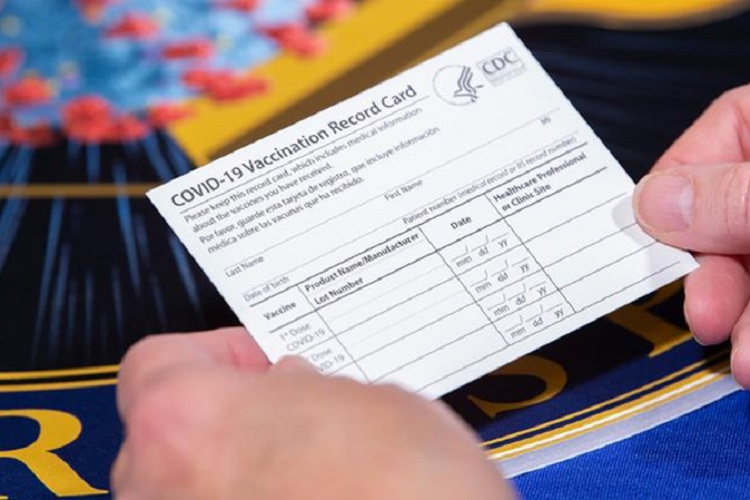 On Wednesday the Department of Defense released the first images of a COVID-19 vaccination record card as well as vaccination kits, according to CNN.

“Everyone will be issued a written card that they can put in their wallet that will tell them what they had and when their next dose is due,” says Dr. Kelly Moore, associate director of the Immunization Action Coalition. “Let’s do the simple, easy thing first. Everyone’s going to get that.”

What’s more, vaccination clinics will also report to their state immunization registries which vaccine was given so that third parties can verify one’s vaccination status regardless of what their card says (or if they’ve lost it).

Moore said many places are planning to ask patients to voluntarily provide a cell phone number, so they can get a text message telling them when and where their next dose is scheduled to be administered.

Every dose administered will be reported to the US Centers for Disease Control and Prevention, said Claire Hannan, executive director of the Association of Immunization Managers. –CNN

The DoD also released information on vaccine kits, which include a card, needle, syringe, alcohol wipes and a mask. There are approximately 100 million such kits ready to go as soon as ‘the’ vaccine(s) is(are) chosen, according to Operation Warp Speed CEO, Gen. Gustave Perna.

The announcement comes less than two weeks after the UK government proposed “freedom passes” in order to reboot their economy – which would seemingly allow those willing to vaccinate a return to normal life. It also comes after signs of industries adapting to a future of immunity cards and vaccinations – with Ticketmaster and Quantas airlines both announcing they will require proof of vaccination before people can attend concerts or fly.

Meanwhile, the vaccination roadshow has begun. On Wednesday, former presidents Obama, Clinton and Bush publicly announced that they would take the vaccine, on camera.

“I may end up taking it on TV or having it filmed, just so that people know that I trust this science,” Obama said in a Wednesday interview with Sirius XM radio – while Bush and Clinton made similar vows.

The next day, NIH Director Dr. Anthony Fauci ominously warned that it would create a “very serious situation” if people don’t take the vaccine.

From the party of "you don't need an ID to vote" comes "show me your papers" to go anywhere and do anything.

The frontrunning vaccine candidates come from two companies – Pfizer and Moderna – which are both awaiting emergency use authorizations in the United States. And FDA panel is expected to discuss the issue on December 10 and 17.