Hundreds of Thousands of Iraqis Protest Against US Occupation 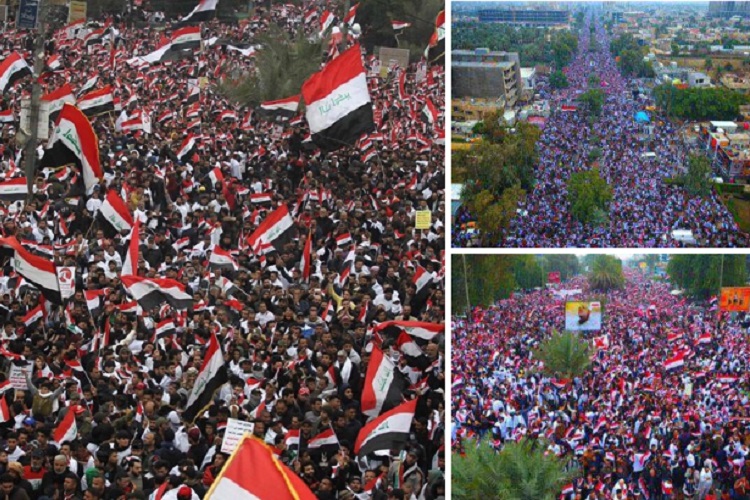 Iraq’s parliament voted last month to expel the U.S. troops who have been occupying the country for nearly twenty years. However, the United States government has refused to comply with the order and has threatened harsh sanctions if they are forced to leave.

The presence of the United States military is unwelcome in Iraq and the rest of the Middle East, but they have shown no signs of slowing down the so-called “war on terror.”

On Friday, massive crowds of protesters poured into the streets of Baghdad to protest against U.S. occupation and demanded that western troops to be sent home. Foreign sources including Press TV estimated the crowds at over a million, while CNN suggested that hundreds of thousands were involved in the protests. The Wall Street Journal gave the smallest estimation at “tens of thousands.” However, video and images from the protest show that actual numbers were far higher.

The protest came together after the powerful Shia cleric Muqtada al-Sadr called for a “Million Man March” in response to the ongoing occupation.

“We will exhaust all peaceful, political, economic, social, cultural and popular means to achieve our main goal, which is scheduling the departure of the occupation forces,” a representative for Mr. Sadr said during the protest.

The streets were flooded with Iraqis from different age groups and demographics. Children held up signs that said “no, no to America” and “no, no to occupation” as they walked with their families. The crowds were filled with Iraqi flags and signs condemning Donald Trump and the U.S. military.

Iraqi President Barham Salih tweeted an image of the protest with the caption, “Iraqis insist on a state with complete sovereignty that will not be breached, serving its people and expressing their independent national will, free from interference and dictates from abroad, a state that guarantees their security and rights in a free and dignified life, a state in security and peace with its neighbors.”

This is just the largest and most recent protest in a series of demonstrations that have taken place on a regular basis since last year against U.S. military occupation and influence in Iraq.