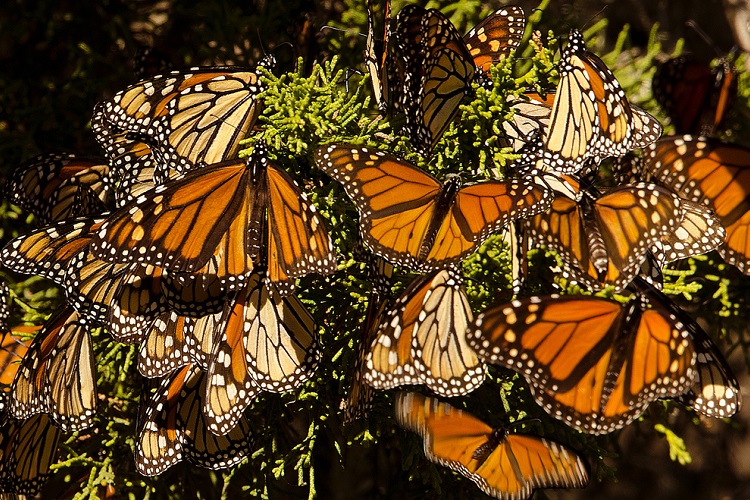 Up in the cool Mexican mountains, billions of monarch butterflies gather together for the winter. When the sun warms their wings to just the right temperature, the mass of monarchs take flight. This dazzling display has now been filmed like never before — by a hovering spy camera disguised as a hummingbird.

The footage is part of PBS NATURE’s Spy in the Wild series. The series features footage from hidden cameras placed inside animatronic “spies” to get an up-close look at the lives of animals. Spy in the Wild explores the idea of animal emotions and tendencies such as a capacity to love, grieve, deceive, and invent. The series makes use of “Spy Creatures” to infiltrate groups of orangutans, meerkats, egrets, tortoises, sloths, cobras and hippos, to name a few.

The spy creatures were created by John Downer Productions, Ltd. an award-winning production company based in the U.K. that specializes in making wildlife films. John Downer and his team have pioneered many of the innovative techniques used for filming wildlife in current nature documentaries. In an interview with NATURE, some of the team discussed how their spy cams were made and some of the challenges involved.

“We wanted to make a small spy creature that could explore and maneuver through a forest and film one of the most fragile creatures in the entire series, monarch butterflies,” Phil Dalton of John Downer Productions said in the interview. “We knew hummingbirds share their habitat and so this was our inspiration. The goal was to make a hummingbird to scale, about 20 centimeters [8 inches] from head-to-tail, hover in all directions, be as quiet as possible and have no exposed moving parts, as well as carry a 4K camera.

“After many prototypes, we managed to make spy hummingbird, weighing just 70 grams,” or about 2.5 ounces, Dalton said. “It could hover just like the real thing. It was also totally harmless to the butterflies with shields to protect the butterflies from coming into contact with moving parts. The butterflies could even land safely on [the] spy hummingbird’s wings. The results were sensational, filming the migrating swarms through the forest, wingtip to wingtip.”

Year after year, generations of monarch butterflies (Danaus plexippus) migrate to the same trees as their predecessors, bowing the branches down with the weight of their orange-black clusters. They travel 4,500 kilometers (2,800 miles) from the temperate forests of North America to hibernate in these wintering grounds in the Mexican Neovolcanic Axis. Though it is believed these trees have microclimate conditions that are ideal for monarch overwintering, the mechanism for this multigenerational migration to these specific trees remains a mystery.

Mexican overwintering sites face threats from deforestation and mining. The recent murders of two butterfly defenders in the El Rosario butterfly sanctuary within Mexico’s much larger Monarch Butterfly Biosphere Reserve, have underscored the seriousness of the threats to these sites and those who defend them.

In December of this year, the U.S. Fish and Wildlife Service is expected to decide whether the monarch butterfly should be included in the Endangered Species Act, which would offer significant legal protection for the species in the U.S.

Liz Kimbrough is a staff writer for Mongabay. Find her on Twitter @lizkimbrough_.