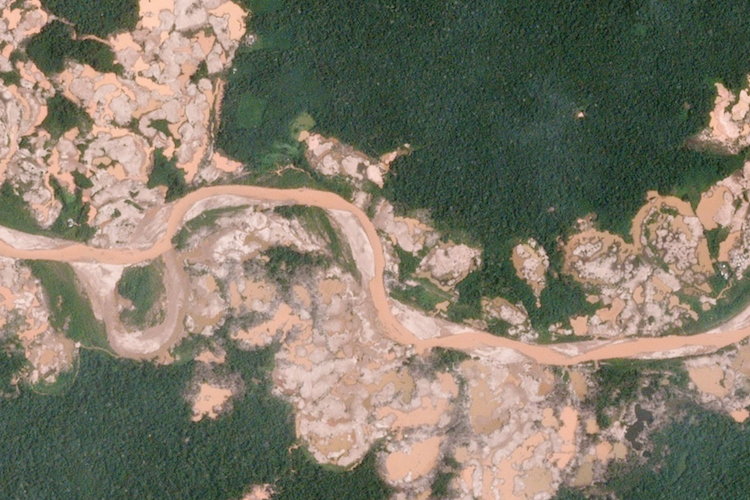 Illegal gold mining led to deforestation of thousands of hectares of forests inside indigenous reserves in the Brazilian Amazon in 2019, according to new satellite image analysis published April 8 by the Monitoring of the Andean Amazon Project (MAAP). Mongabay had exclusive access to the report prior to its release.

MAAP, a program of the organization Amazon Conservation, has documented more than 102 square kilometers (40 square miles) of mining-linked deforestation in the indigenous reserves of Kayapó, Munduruku and Yanomami. These indigenous lands are all officially demarcated and supposed to be protected from industrial activity by the Brazilian Constitution.

In Peru, MAAP previously tracked hundreds of hectares of lost forest at the hands of illegal miners in the region of Madre de Dios, bordering Brazil and Bolivia. Now, for the first time, it has found a similar rate of deforestation in Brazil’s section of the Amazon, and the evidence shows that it’s been going on for several years.

“This is the closest thing that we’ve seen to Peru,” Matt Finer, an ecologist and the director of MAAP, said in an interview. In other parts of the Amazon, he said, mining hasn’t caused the loss of forest on that scale, though nefarious environmental effects such as mercury contamination of water sources typically come in tow.

Losses of around 20 km2 (7.7 mi2) of mining-related deforestation were found in the Kayapó and Munduruku reserves in 2019; in the Yanomami reserve, it reached 5 km2 (1.9 mi2). MAAP combined its analysis of satellite images down to a resolution of 3 meters (10 feet) with news reports and maps of gold mining areas across the Amazon compiled by the Brazilian organization RAISG to get a “real-world snapshot” of these incursions.

Finer said he and his colleagues had been getting reports of a rush of miners into the Yanomami reserve — up to 10,000 by the count of the human rights NGO Survival International, which holds President Jair Bolsonaro and his policies responsible for the loss of forest, as well as mercury pollution, societal disruption and the introduction of diseases such as malaria that result from mining. They say his rhetoric, in favor of developing the Amazon, has emboldened would-be miners, both legal and illegal.

“[M]any of their territories are being invaded and stolen for logging, mining and agribusiness, with the encouragement of President Bolsonaro, who has virtually declared war on Brazil’s indigenous peoples,” campaigner Sarah Shenker said in a statement.

Survival International also recently warned of the danger that miners could bring the global COVID-19 pandemic to uncontacted peoples in Brazil, with the potential to “wipe out whole peoples.” On April 1, Brazil’s health ministry confirmed the first case of the disease in a member of Brazil’s indigenous communities in the state of Amazonas, and 26 other people are being monitored after they came into contact with a doctor who has tested positive for COVID-19.

“Where invaders are present, coronavirus could wipe out whole peoples,” Shenker said. “It’s a matter of life and death.”

Mongabay reported in February that nearly 3,800 requests had been submitted to the Brazilian government for mining-related activities inside indigenous territories or protected areas. Another investigation found that the mining giant Anglo American has applied for almost 300 such licenses in indigenous territories.

In February, Antonio Oviedo of the Brazilian NGO Socio-Environmental Institute told Mongabay that his research revealed an 80% uptick in deforestation within indigenous territories in 2019 compared with 2018. Oviedo similarly sees Bolsonaro, who took office at the start of 2019, as the catalyst for that rise.

“Whenever he makes statements against the environmental agencies responsible for oversight, the deforestation statistics automatically jump the very same month,” Oviedo said. “The deforestation is a clear indicator of the impact the policies are having.”

Though mining is still illegal in indigenous reserves under Brazilian law, Bolsonaro has introduced a bill that would allow mining, oil and gas extraction and other uses of these lands, justified partly on the grounds that it will bring development to indigenous peoples.

But Marcio Santilli, a former head of FUNAI, the Brazilian government’s indigenous rights agency, disagrees. Instead of improving their lives, he said in a February interview with Mongabay, the proposed law, which is currently awaiting a postponed vote in Brazil’s Congress, would “guarantee the exploitation by third parties of their natural resources.”

Deforestation related to mining on indigenous lands, however, began before Bolsonaro took office in January 2019, MAAP researchers found, pointing to tracked forest loss as a result of gold mining back to 2017. “These problems didn’t come out of nowhere,” Finer said. 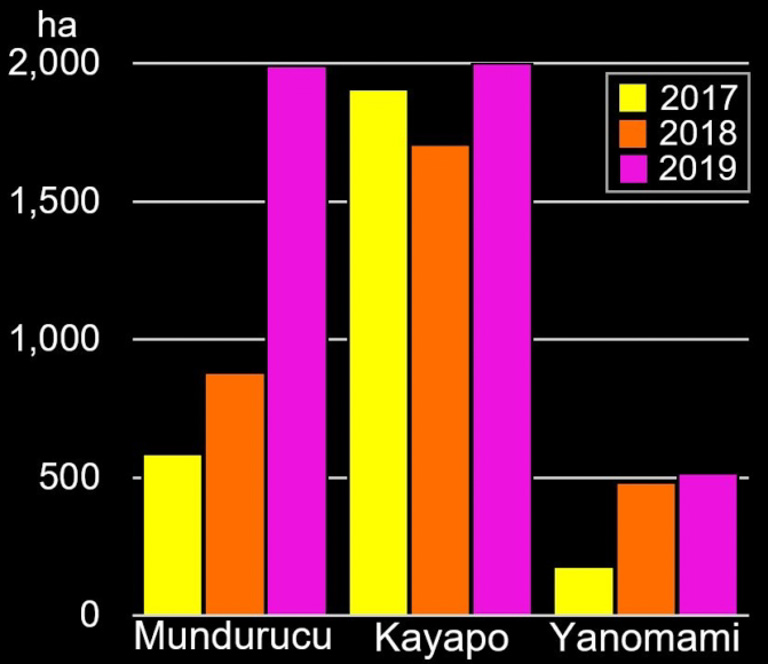 And while MAAP’s analysis does show a steady increase in the three reserves they examined — including a more than 100% jump between 2018 and 2019 in Munduruku — it also revealed a growing trend.

Still, the specter of a bill legalizing the incursions of miners into indigenous lands looms, threatening to push deforestation rates even higher as a result of the thrum of new extractive industries within what have been constitutionally protected indigenous lands for decades.

“You can imagine — if it was more formalized — the deforestation that could quickly unfold,” Finer said.

John Cannon is a staff features writer with Mongabay. Find him on Twitter: @johnccannon