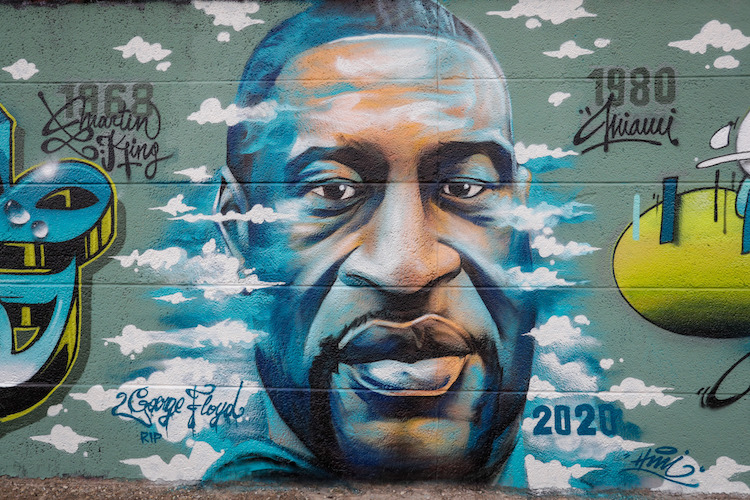 Although most people didn’t know who George Floyd was, the mark he left on this planet is visible perfectly in the background, out of sight, before his tragic passing.

“Big Floyd” was a rapper for decades, and he was featured on the tapes of world-renowned, documentary-inspiring legendary music icon DJ Screw. Here are a few of his songs.

The thing is, there’s much more to Houston rap culture than meets the eye. Before the slowed down, sort of happy, chilled out vibe of DJ Screw, and the artists he featured such as Big Floyd, ESG, Lil Keke, and others, there was a more revolutionary scene in Houston.

It started in the late 80’s and early 90’s: K-Rino, arguably the world’s most famous “conscious” rapper, founded the South Park Coalition. It was a group of artists that constantly featured themes of fighting against the system in their songs.

Themes of constantly struggling to survive the epidemic of crooked police in Houston, struggling to survive and make enough money to have food and shelter, are conveyed through the clever and entertaining wordplay of the South Park Coalition. Most if not all of these SPC members were close to the Screwed Up Click, of the same set of neighborhoods on the southside of Houston, and by extension these musical revolutionaries were tied to Big Floyd.

K Rino is a Houston based activist, considered by [1] even more well known Houston legends such as Z-Ro, to be the single greatest rapper of all time. These songs below are timeless, documenting a true history of revolutionary culture.

George Floyd can be seen in this fairly recent video with over 6.5 million views by Z-Ro, and Scarface of the Geto Boys. He’s in the red Screwed up Click (SUC) shirt, the thumbnail of the video.

Scarface, in the video with Floyd, was making songs about the CIA essentially running drugs and trying to poison the community, way back in 1990.

The Geto Boys were vital in showing people the conspiracy of the drug war, in one of Houston’s first successful rap albums. The record is laced with the very beneficial, anti-authoritarian notion that we should not be quick to trust the system. “City Under Siege” was also a local Houston tv show resembling “Cops,” and so their song exposing the system referenced that. The song is so legendary, anti-authoritarian sentiment from it was sampled [2] for Tupac Shakur’s first album, in the song “Violent.”

In the same song, fellow Geto Boys member Willie D lays out information that few had access to at all back in 1990. Today, Willie D is a persistent activist in Houston, recently having attended protests from Houston, Texas, to Sacramento, California.

Think about this: there are very few places on this entire planet left, where civilians are allowed to own guns and use them for protection.

Texas is probably the most famous place on Earth for such an ability, and Houston is Texas’ largest city, as well as the 4th largest in the United States.

Now this is critical: activism, trying to make the world a better place, does not work unless there is some element of “fun” in it.

Without some form of satisfaction, fun, enjoyment, festivity, human connection or whatever it is, activism utterly fails. Often, there’s actually a deficit of these qualities, in an activist’s efforts trying to accomplish something, or spread some info.

In other words, how many people do you know, who really know the truth and have some world-changing things to say, yet when they speak it falls on deaf ears because there is no element of fun, satisfaction, connection or entertainment in their effort to communicate knowledge?

Activism one hundred percent fails in the absence of enjoyment, or something that really captures the attention and excitement of people who then become open to hearing new information.

Back to George Floyd and the Houston rap scene, one can see why it exploded nationwide and then worldwide: the music is fun. All the songs paint a picture of people doing whatever they want, every day, living life to the fullest and never letting the system inhibit such fun.

In the Houston rap scene, people drive customized, fun cars, with distinct rims and colors unique to the city. Much pride and enjoyment is derived from this. People used to make tens of thousands of dollars just selling their music on the streets.

Those people also express a great appreciation for weed, and always have. Cannabis is still illegal in Texas, but we all know what direction the entire country is going.

There are currently CBD-only shops all over Texas, and they just popped up. They look just like cannabis dispensaries, featuring pure, unadulterated buds that happen to have no THC, just medicinal CBD, unique to those strains. This is a massive step toward full legalization in Texas.

What made it possible for California to legalize cannabis, or for many to do it anyway in Texas, regardless of a disgraceful, brutal history between the Houston police and residents of the city?

What made it possible, was people disobeying. People smoking anyway made it to where weed could no longer remain illegal.

The creation of a vibrant, active fabric of culture where many people smoke and have fun, was the very thing which enabled it to be legalized.

This is activism, believe it or not. That which renders an unjust law useless, unenforceable, is the definition of a solution.

One might not think that cannabis or Houston rap is very revolutionary or extraordinary, but they may lack the ability to objectively recognize what gets things done, and what doesn’t.

George Floyd would go to the studio with DJ Screw and record back in the mid 90’s, until Screw sadly passed away in 2000. DJ Screw was a shining example of the revolutionary spirit.

He sold tens of thousands [3], if not hundreds of thousands, of his unique tapes, straight out of his house and the trunk of his car in Houston.

It is believed that he made over a million dollars, doing nothing but having fun, making his slowed down mixes of rap from all over America, selling his 300 + tapes to tens of thousands of people in person.

If starting your own business is revolutionary, the epitome of solution oriented, paving a way for prosperity outside of the confines of wage slave society, well then DJ Screw is one who should never be forgotten.

The legacy of Screw, and his even more hardcore revolutionary, Black Panther-like peers, well it can now be broadcast to the rest of the world, inadvertently, due to the tragic murder of George Floyd.

The entire world needs culture like this: the culture of freely doing what people want, creating and sustaining positive independent business derived from true passion.

Now, hundreds of thousands of views are piling onto the videos of Big Floyd’s music with DJ Screw, and that means the entire world is learning about their legacies.

They are legacies of living life to the fullest, disregarding laws which are unjust, and standing strong and fearless in the face of the Houston police who notoriously harass people.

People don’t seem to grasp the fundamental importance of culture.

The fabric of culture wherever you are, is probably the number one determining factor in your survival: that is, the survival of all things you enjoy, all that you believe in and practice, your protection from the constantly encroaching march of the police state.

Make no mistake, people around the world can mind their own business, never try to rebel against anything or assert themselves, and without instigating anything, the police state will take from them the few abilities, rights, amenities, that they have: just because nobody is stopping them.

That’s how the world works. If a population, for instance, in Australia will tolerate being restricted in regard to travel, forced medical procedures, or totalitarian surveillance on the highways to check for people texting and driving, well this is what will happen.

For tolerating the smallest bit of disrespect from their government, those people will see their situation with freedom and prosperity worsen, and worsen, until their quality of life is completely unrecognizable from how it used to be.

This is the fabric of culture: if nobody was rebellious, armed, creative, or passionate about independent business, that society would collapse under the weight of a threat constantly looming over all people, the government.

You can check history and believe it, or don’t. The fact is, “freedom culture” is the antidote to a population being constantly bullied, controlled, and used. Look at the most blatantly totalitarian countries in the world, such as China or the Philippines, and you’ll see where we don’t want to end up.

The polar, complete opposite of for instance, Chinese culture of never going against the government, is Houston rap culture. Those people have stood strong, spoken out about injustice, created and paved ways for the most enjoyable and satisfying positive money making plans one could possibly think of.

If people across the world that are unfamiliar with the culture dig deeper, they’ll find things that are even more profoundly revolutionary, such as the early music of South Park Coalition rappers Dope E, K-Rino, Klondike Kat, and more.

For instance in this song from 1991, Dope E comedically lambasts the media with a vitriolic and understandable attitude.

In this song from 1992, K-Rino (Killa Rhymes Intellectually Nullifying Opponents) laid out what it means to survive in the dangerous era of the early 90’s, how the system is to blame for certain conditions, and what his response is to make things better.

In these mid 90’s songs, Klondike Kat of the same group demonstrated pure artistry. He also belonged to the group Street Military, an earlier prototype of the revolutionary / street flavor of Houston.

It just so happens that George Floyd, of Third Ward, Houston, Texas, knew a whole lot of these people and himself was raised in this culture.

This documentary explored the history of Houston rap. It started off more gritty and revolutionary, and ended up more fun and enjoyment based: the two modalities do fuse well.

Nothing revolutionary ever works without enjoyment, fun, morale, and all of these things people seek and feel good from.

If anyone ever wants to change the world, they must put off good energy and offer something enjoyable and satisfying to those who might listen. One could easily make something contrived of course, simply injecting fun or enjoyment, festive vibes into something that is much more serious.

However, when somebody has the right touch, the right way of doing things, an artist can capture the attention and interest of viewers and then successfully deliver a life-changing message.

Without the element of fun, there can be no successful activism.

This article (George Floyd was a Rapper Connected with the Revolutionary Rap Music Scene of Houston) originally created and published by Waking Times and is published here under a Creative Commons license with attribution to Alex Pietrowski and WakingTimes.com.