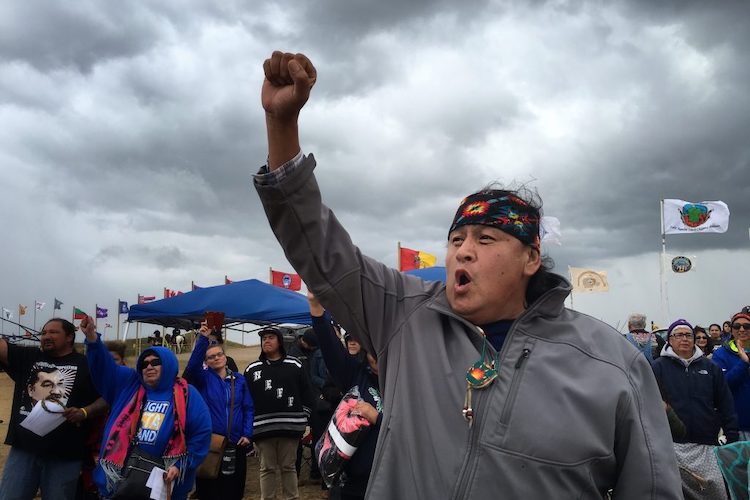 A U.S. federal court has ordered the controversial Dakota Access Pipeline (DAPL) to immediately halt operations and evacuate all oil from the pipeline over concerns about its likely environmental impact and the potentially existential risk it poses to the land belonging to the Standing Rock Sioux Tribe.

The decision, handed down by U.S. District Judge James Boasberg on Monday, is being seen as a major victory for the Native American tribes and environmentalist organizations who have waged a high-profile fight to prevent the major pipeline’s route from crossing through the Standing Rock Sioux’s main water supply.

The court order also comes on the heels of the cancellation of another major U.S. pipeline project on Sunday in a stunning rebuke of the Trump administration’s push to lift environmental regulations for the benefit of domestic fossil fuel extractors.

“It took four long years, but today justice has been served at Standing Rock,” said Standing Rock Sioux Tribe attorney Jan Hasselman in a press release. “If the events of 2020 have taught us anything, it’s that health and justice must be prioritized early on in any decision-making process if we want to avoid a crisis later on.”

DAPL TO BE SHUT DOWN!

Congrats to @Earthjustice and @StandingRockST for this significant win. https://t.co/DfW6lnHPhU

The ruling found that the U.S. Army Corps of Engineers had violated the National Environmental Policy Act (NEPA) and willfully ignored the catastrophic consequences of a potential oil spill when it permitted Energy Transfer LP to construct and operate a section of the pipeline lying directly beneath Lake Oahe in South Dakota without even producing an adequate Environmental Impact Statement, reports Reuters.

“Given the seriousness of the Corps’ NEPA error, the impossibility of a simple fix, the fact that Dakota Access did assume much of its economic risk knowingly, and the potential harm each day the pipeline operates, the Court is forced to conclude that the flow of oil must cease,” the order said.

The court ordered Energy Transfer to begin winding down the 570,000 barrel-per-day (bpd) pipeline within 30 days, effectively sealing off the largest artery for the transportation of crude oil from the North Dakota Bakken shale basin to the Midwest and Gulf Coast.

Standing Rock Sioux Tribe Chairman Mike Faith described the occasion as historic for his tribe and for the myriad supporters who have supported the anti-DAPL fight over the past several years.

“Today is a historic day for the Standing Rock Sioux Tribe and the many people who have supported us in the fight against the pipeline,” Faith said. “This pipeline should have never been built here. We told them that from the beginning.”

Energy Transfer plans to continue fighting to avoid a shutdown through legal and administrative measures, and will appeal the decision as a last resort.

It will likely take about thirteen months to produce an Environmental Impact Statement, according to the Army Corps of Engineers. However, it remains unknown whether an EIS would actually be enough to save the pipeline, which has been operating for roughly three years.

Today a federal judge shut down Dakota Access pipeline for 13 months. Joy and power to the Standing Rock Sioux Nation [and 300+ sovereign Indigenous nations in solidarity] who protested the 1172 miles of proposed $3.78b DAPL since 2014. Never yield that which is your human right. pic.twitter.com/5oTTv5u3t7

“The Court does not reach its decision with blithe disregard for the lives it will affect. It readily acknowledges that, even with the currently low demand for oil, shutting down the pipeline will cause significant disruption to DAPL, the North Dakota oil industry, and potentially other states,” Boasberg wrote in his order.

In the meantime, the Trump administration, conservative politicians, and oil industry groups have blamed activists and accused them of seeking to sabotage the U.S. economy.

“I’m not quite sure what they’re cheering except for perhaps the loss of jobs all throughout America,” U.S. Energy Secretary Dan Brouillette told Fox Business Network.

“Shutting down the Dakota Access Pipeline would have devastating consequences to North Dakota and to America’s energy security. This terrible ruling should be promptly appealed,” said Trump ally and North Dakota Sen. Kevin Cramer.

However, environmentalists have unabashedly hailed the pipeline setbacks as victories in the fight to prevent the potentially disastrous consequences of the pipeline’s operations.

“Energy Transfer’s Dakota Access Pipeline and other environmentally reckless fossil fuel infrastructure projects will only make billionaires richer while the rest of us suffer,” said Greenpeace USA Climate Director Janet Redman in a statement. “Today’s ruling — arriving on the heels of the Atlantic Coast Pipeline victory — may be a calamity for oil and gas executives looking to profit from the disastrous climate crisis, but it’s a huge win for those of us committed to a liveable world.”

“The past 24 hours have sent a loud and clear message to fossil fuel corporations still committed to constructing dangerous pipelines — the future does not belong to you,” Redman added.