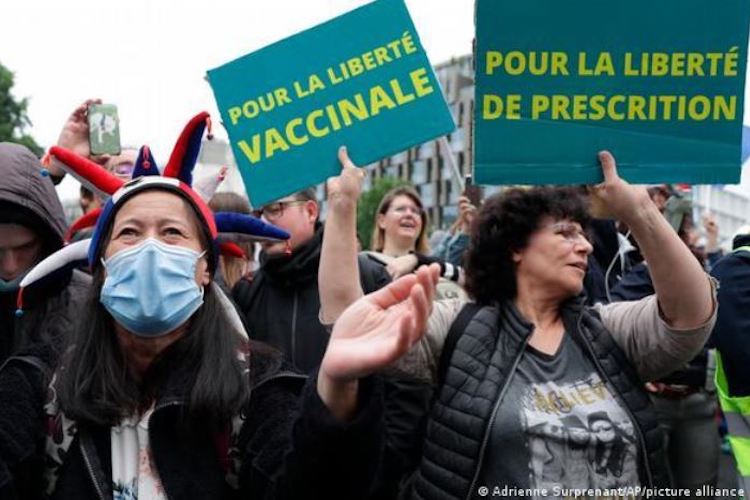 France saw its largest protests yet against the country’s health pass, as thousands swept across major Italian town demanding an end to the infamous green pass.

On Saturday, Protesters took to the streets in France and Italy in opposition to COVID rules that they say infringe on their civil liberties but which officials argue are needed to curb the coronavirus pandemic. The protests come as European countries double down on efforts to get wide portions of their populations vaccinated in the face of the spreading delta variant — and in a bid to avoid further lockdowns.

Demonstrations against France’s health pass and mandatory vaccines for health care workers entered their fourth weekend, with Saturday seeing the largest rally yet, Deutsche Welle reported. An estimated 237,000 people turned out nationwide, according to the Interior Ministry. The figure exceeds the attendance a week ago, which saw 204,000 protesters.

While 17,000 people turned out in Paris, much of the focus was in southern France — where between 10,000 and 20,000 people marched in Nice alone. In contrast to prior weekends, the demonstrations were largely peaceful. The more major scuffles broke out between protesters and police in Lyon, France’s third-largest city. 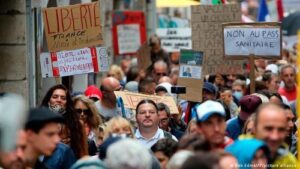 The city of Bayonne and other areas of southern France saw larger numbers of protesters.

The protests come on the heels of a Constructional Council ruling on Thursday. The court approved the government’s plan for the health pass and vaccine requirements for workers in hospitals in nursing homes. France is currently in the grips of a fourth wave of coronavirus infections. The county has seen a boost in vaccinations since French President Emmanuel Macron announced the health pass in July. Some two-thirds of the French population eligible for the jab have received one dose, while 55% are fully vaccinated.

Meanwhile, protests also took place in several Italian cities over the weekend against against the implementation of the country’s Green Pass, which is now required for teachers and for people to attend indoor events. 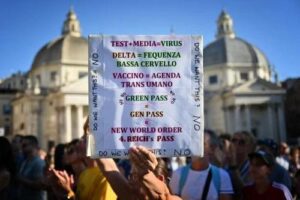 One of the posters at the ‘No Vax’ movement demonstration in central Rome on August 7th, 2021. Photo AFP 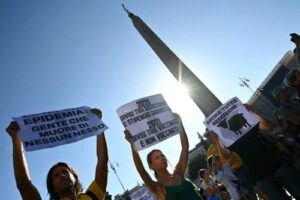 Members of the ‘No Vax’ movement take part in a demonstration against the introduction of a mandatory green pass at the Piazza del Popolo in central Rome on August 7th, 2021. Photo AFP

Thousands more marched in Milan, with some comparing themselves to holocaust victims by wearing Star of David badges with the words “not vaccinated”, news agency ANSA reported.

In Turin, angry citizens marched in front of the editorial offices of Italy’s biggest dailies “La Repubblica” and “La Stampa” shouting “You are shit! Sold out!”

Protesters from the “No Vax” movement also gathered in Naples, objecting in particular to vaccinations for children, shouting “Hands off the children” and “Shame! Shame!”.

The health pass in France and the Green Pass in Italy are both digital certificates that provide proof of a person’s coronavirus status. They contain data on whether the person is vaccinated against COVID-19, has recently tested negative, or has recovered from the virus.

In Italy, the Green Pass became compulsory in Italy on Friday and is required to enter museums, sports venues, cinemas and for indoor dining. School teachers, university staff and university students are also required to show the pass.