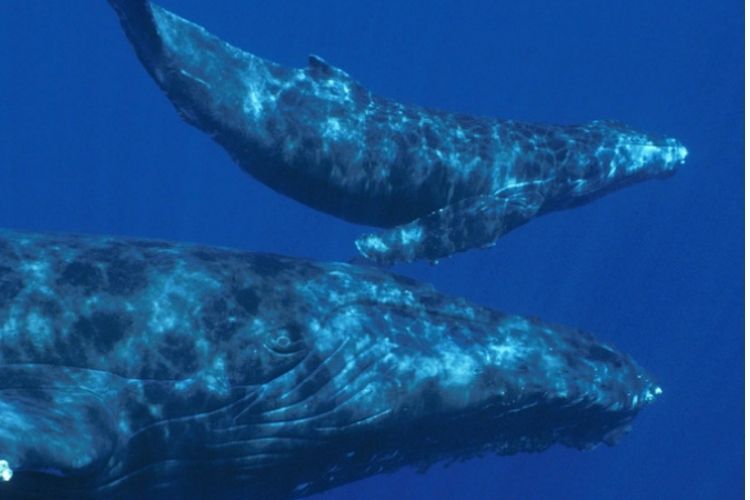 Jana Winderen finds it hard to get away from human noise. As a sound artist, she’s traveled to some remote parts of the world — from the Barents Sea to the North Pole to a small fishing village in Thailand — to capture underwater audio. But she’s constantly reminded that people can be found just about everywhere.

“The first time I put hydrophones in the water, the first thing you notice is that there is some engine or there is some pump or there is some compressor — something that is human-made,” Winderen told Mongabay in an interview. “And it is very loud compared to some other smaller creatures. It’s totally overwhelming at times.”

Winderen’s latest work is a haunting six-minute track that melds together underwater seal calls and crackling crustaceans with anthropogenic noise like motorboats and pile-driving, which accompanies a new scientific review published last week in Science. The review, co-authored by 25 international researchers, including Winderen herself, vetted more than 10,000 studies to critically examine the issue of anthropogenic noise in the ocean, and how it can negatively impact marine animals in terms of behavior, physiology and even survival.

Lead author Carlos Duarte says the paper was motivated by a concern that noise pollution wasn’t being openly discussed as a major problem affecting the ocean or being addressed in conservation policies, despite there being a strong, but niche, body of research on the issue.

“I believe it was really timely that we addressed this elephant in the sonic room of problems in the ocean,” Duarte, a distinguished professor at King Abdullah University of Science and Technology (KAUST) in Saudi Arabia, told Mongabay in an interview. “This is being absolutely ignored. This omission weakens our efforts to drive policies that are conducive to a healthy ocean.”

Duarte said noise pollution could have “far more profound consequences than plastic pollution” because the issue is “silent” to most people.

“Every citizen can go to the shore and see plastic washed on the beach or floating on the seawater and be appalled about it,” he said. “Whereas in the case of a noise pollution, very few citizens stick their heads on the water for a sufficiently enough time to be able to perceive sound, and even when they do, most don’t [know] what is it that they are [hearing] because our heads are not a designed to hear in the water.”

Humans may not be able to perceive underwater sound very well, but marine animals have evolved over millions of years to detect and emit sound across a range of frequencies, which helps them navigate, forage, defend territory, and even find potential mates in the ocean. Sound also travels faster underwater than it does on land, making the marine world a kind of information highway for its inhabitants.

Fish like Atlantic cod (Gadus morhua) produce hums and grunts as they gather together to spawn. Pinnipeds like bearded seals (Erignathus barbatus) make high-pitched underwater trills to attract mates. Humpback whales (Megaptera novaeangliae) sing melodic tunes to communicate with other whales that are miles away. Snapping shrimps use snaps and crackles to stun prey. And larvae and juveniles of various marine vertebrates and invertebrates use sound to navigate the ocean and find appropriate places to settle.

But when human noise is introduced, marine life will suffer, the review suggests. Marine animals may change their behavior to avoid the noise, and consequently miss out on prime foraging or mating opportunities. Noise can cause hearing damage in marine mammals and fish. And in some cases, anthropogenic noise will even increase mortality in marine animals. 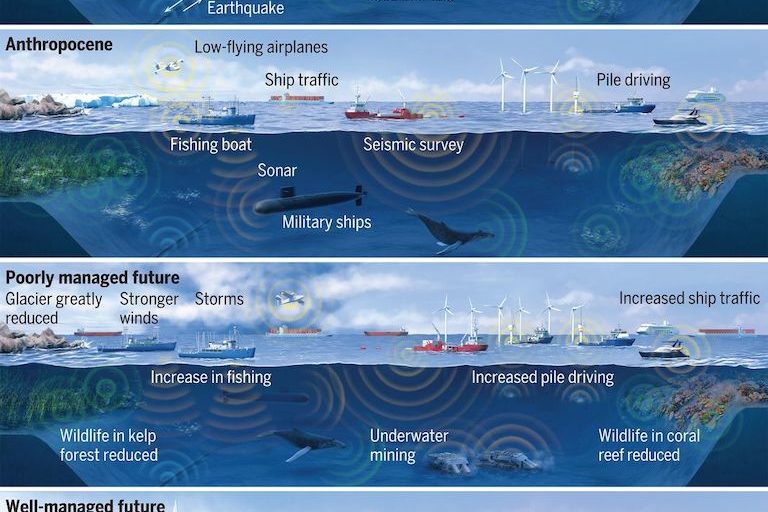 The illustrations from top to bottom show ocean soundscapes from before the industrial revolution that were largely composed of sounds from geological (geophony) and biological sources (biophony), with minor contributions from human sources (anthrophony), to the present Anthropocene oceans, where anthropogenic noise and reduced biophony owing to the depleted abundance of marine animals and healthy habitats have led to impacts on marine animals. Image by Xavier Pita / KRAUT.

“In some cases underwater noise can cause animals to behave inappropriately and end up stranding on a beach and dying,” co-author Daniel Costa, distinguished professor at the University of California, Santa Cruz, told Mongabay in an email. “This has happened with beaked whales. However, this is less common than more subtle effects such as having a harder time finding food, or finding a mate. Some fish use sound to identify the correct habitat to settle. It may reduce the ability of a fish to hear a predator. So the effects are wide ranging, and in many situations are hard to measure or identify. In some ways it is analogous to the ‘death by a thousands cuts.’”

Some of the loudest and most destructive anthropogenic sounds in the ocean include things like bomb detonation, cargo ships, pile-driving during wind farm construction, seafloor dredging, and even traffic from bridges or low-flying airplanes. But low-key recreational activities such as scuba diving, surfing, swimming, drone flying or operating a small motorboat would have some kind of effect on the marine environment as well, albeit a much smaller effect, the paper suggests.

Since anthropogenic noise is near constant in the ocean, Duarte says it can have a “chronic impact” on marine animals.

“We are seeing how many marine animals are gradually decreasing in body condition, becoming skinny [and] there’s evidence of starvation,” Duarte said. “We believe the chronic impacts of … noise is one of the drivers of this general weakening of marine animals that suddenly erodes the capability to resist other impacts and rebound.”

Climate change can make noise pollution in the ocean even worse. For instance, the melting of sea ice can transform a quiet polar environment into a busy soundscape as humans are able to access areas normally covered in ice, which may lead to an increase in shipping, fishing and other activities.

While the issue of anthropogenic noise is a serious one, the paper suggests there are workable solutions. The key is simply stopping the sound.

There are also multiple technological solutions available that would help mitigate certain human-made noises, says co-author Lucille Chapuis, a postdoctoral fellow at the University of Exeter.

“One of the biggest noises is pile-driving when they build wind farms [which] creates lots of short, short bursts of noise but extremely loud,” Chapuis told Mongabay in an interview. “So now they can put a bubble barrier around the construction site [which will] absorb the sounds. That’s just an example. There is also a big problem with shipping as there are lots and lots of boats [but] you can change the shape of the boats, change the engine to make them more quiet.”

Since its release, the paper has garnered a large amount of media attention, which Winderen says is exactly the result they were hoping for.

“This is not new research — it has been done over many, many years, and has been known for a very long time that there is sound underwater,” she said. “I think this [paper] can really spread the word about the importance of [the issue].”

What the authors ultimately want is for noise mitigation to be adopted into policy, and for the ocean to be filled only with sounds from geological and biological sources. Cracking sounds from crustaceans. Seal calls. Whale songs. The whoosh of waves. The snap of melting ice.

“A healthy ocean sounds like a busy ocean,” Duarte said, “but the busyness comes from marine life, not from humans.”

Banner image caption: A mother humpback and calf off the coast of Maui in the Hawaiian Islands. Photo courtesy of NOAA.