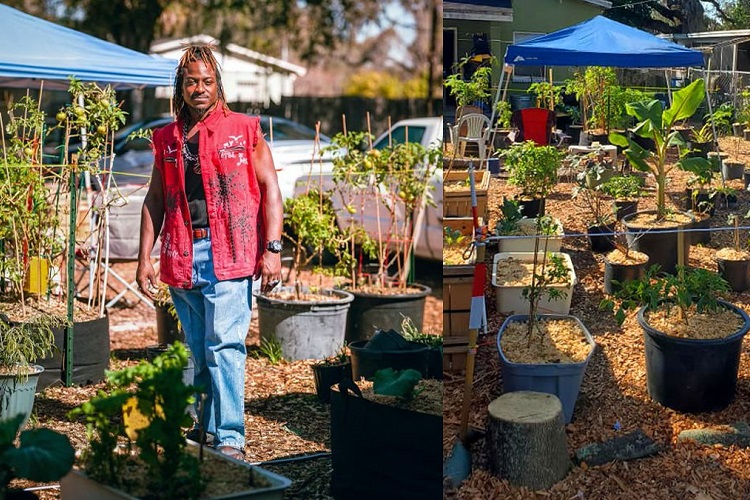 When millions of people across the United States received their federal stimulus checks to help them cope with the devastating economic repercussions of the novel coronavirus pandemic and resulting lockdown, most people spent their checks on basic necessities like food, rent, mortgage, utilities, and other basic necessities.

However, one man from East Tampa, Florida, decided to use his funds to invest in a much more long-term project: building his own garden at home and using it to help provide food for himself. He’s now teaching his community about the massive benefits of food independence.

Michael Chaney, who goes by the nickname “Spirit Mike,” has long been interested in gardening. It wasn’t until the pandemic struck and local supermarkets were struck by the crisis that he was able to muster the self-motivation and time to fully pursue what began as a hobby and now has turned into his passion.

When he received his first stimulus check, he immediately used the funds to purchase some pots and start growing his first tomato plant. He also spoke to seasoned gardeners at the nearby A Land of Delight Natural Farm to pick up some materials and advice that would enable him to begin growing his own food, he told local radio station WMNF.

“I do biointensive gardening, which means planting as much as you can in a small space,” Chaney told Atlanta Black Star. “I specifically picked these types of fruits [dwarf plants] because they grow fruit fast.”

Chaney derives the most pride from his moringa trees, which he values for its high viamin C content and celebrated medicinal properties as well as its antifungal, antiviral, anti-inflammatory and antidepressant qualities.

“That is the Michael Jordan and the Kobe Bryant together,” Chaney told WMNF with pride.

“If you were stranded somewhere and all you have his this and water you would not only survive, you would thrive,” Chaney added. “I don’t work out. All I did was add this to my diet and add flax seed fiber and I lost 65 lbs.”

Chaney also has nine chickens that he purchased for only $3 per chick.

“My aim is to make my food cost zero,” he explained. “So, my food scraps go into the soldier fly larvae bin, they eat that and produce more larvae. Those larvae get fed to the chickens. The chicken produces eggs, I sell the eggs and eat the eggs; life is good.”

Chaney made sure to meticulously plan his garden so that actually managing it and ensuring its success would be much easier.

“It’s very important that you plan your garden. Do your research before you put a dollar down because you want your dollar to go as far as it can,” Chaney said.

He is now upholding the garden – which he has named New World Growers – as an example of community self-determination and food independence at a time when food insecurity is sharply on the rise.