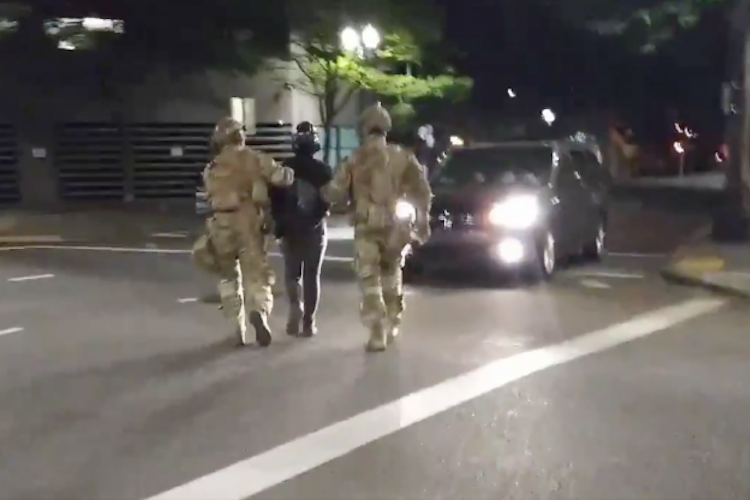 In a bid to suppress protests against police brutality and racial injustice in Portland, Oregon, federal authorities have turned the city into a de facto police state in recent days, where heavily-armed security personnel roam the streets and unmarked vehicles snatch suspected protesters from city streets.

Multiple reports from Portland indicate that the camouflaged federal officers from the U.S. Marshals Special Operation Group and the SWAT-like Border Patrol Tactical Unit (BORTAC) have been escalating their tactics against residents in a manner that increasingly resembles some of the world’s most authoritarian governments.

And to make matters worse, the federal deployment isn’t even wanted by local authorities.

On Thursday night, Oregon Public Broadcasting reported that federal law enforcement have been driving around downtown Portland in unmarked minivans and grabbing protesters, without even offering an explanation of why they are being detained, and whisking them off.

For lawyer Juan Chavez, the director of the Oregon Justice Resource Center, the tactics are tantamount to “abduction” and “kidnapping people off the streets” – methods of state repression that are more common in countries with notoriously wretched human rights standards like Colombia, Mexico, or the Philippines, where enforced disappearances of dissidents are the norm.

In one such incident on July 15, protesters Conner O’Shea and Mark Pettibone were leaving a protest at the Multnomah County Justice Center and Mark O. Hatfield Federal Courthouse when an unmarked minivan pulled up in front of them.

While O’Shea said he managed to flee – after which he was pursued by a second minivan – Pettibone wasn’t so lucky.

“I am basically tossed into the van,” Pettibone said. “And I had my beanie pulled over my face so I couldn’t see and they held my hands over my head.”

Pettibone was understandably terrified and had no idea why he was arrested or detained before ultimately being released two hours later. However, during the ordeal he was essentially blindfolded while surrounded by armor-clad men who wore no markings and didn’t even identify themselves.

As it turned out, Pettibone was brought to a federal courthouse before he was released.

“It was basically a process of facing many walls and corners as they patted me down and took my picture and rummaged through my belongings,” he said. “One of them said, ‘This is a whole lot of nothing.’”

While the two attend protests regularly, as is their right, they haven’t engaged in any property destruction, vandalism, or even shined laser pointers at officers.  However, Pettibone assumed that it was because he was profiled based on his wardrobe.

“I just happened to be wearing black on a sidewalk in downtown Portland at the time,” Pettibone said. “And that apparently is grounds for detaining me.”

The abductions of protesters off city streets have also been accompanied by indiscriminate violence being meted out against local residents. On Thursday night and Friday morning, federal officers in gas masks marched through downtown Portland and inundated the streets with tear gas. A federal judge had previously barred Portland police from using the chemical agent, reports New York Times.

The violent federal deployment to Portland appears to be a result of President Donald Trump’s June 26 executive order to protect monuments across the country. However, the order also included provisions granting federal authorities like the Department of Homeland Security a six-month authorization to provide “personnel to assist with the protection of Federal monuments, memorials, statues, or property.”

And on Thursday, acting Homeland Security secretary Chad Wolf arrived in Portland and essentially declared his intention to stamp out what he described as a “violent mob” of anarchists enabled by a weak local response.

Mayor Ted Wheeler, who has pleaded for calm since protests broke out following the May 25 killing of George Floyd by Minneapolis police, has blasted the deployment as totally “irresponsible.”

“We do not need or want their help,” Wheeler earlier this week. “The best thing they can do is stay inside their building, or leave Portland altogether.”

Meanwhile, Multnomah County Sheriff Mike Reese decried what he called a “significant setback” dealt by federal authorities to attempts to calm tensions between the community and the police.

Most forcefully, Oregon Gov. Kate Brown has accused Trump of essentially starting a war on the streets of Portland in a cynical move to win votes in neighboring states for the November presidential election – an approach she was sure of following her talk with the acting DHS head.

“This political theater from President Trump has nothing to do with public safety,” Gov. Brown said in a Thursday tweet thread. “The president is failing to lead this nation. Now he is deploying federal officers to patrol the streets of Portland in a blatant abuse of power by the federal government.”

“I told Acting Secretary Wolf that the federal government should remove all federal officers from our streets,” she added. “His response showed me he is on a mission to provoke confrontation for political purposes. He is putting both Oregonians and local law enforcement officers in harm’s way.”

“Trump is looking for a confrontation in Oregon in the hopes of winning political points in Ohio or Iowa.”