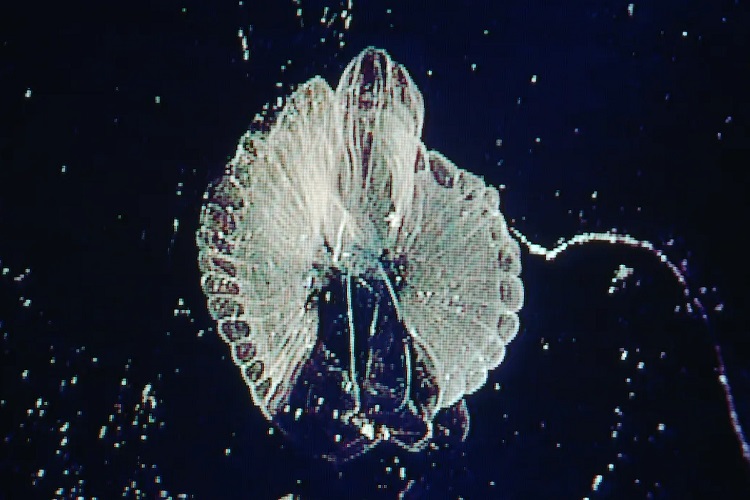 The oceans are home to some strange looking animals, some of which are playing an outsized role in helping us combat the urgent climate crisis.

One of those animals is the giant larvaceans, which inhabit seas around the world. As the Los Angeles Times reported, an enormous balloon of mucus about three feet wide often surrounds these squishy tadpole-like animals, and researchers have recently discovered that they play an enormous role in helping the ocean remove planet-warming carbon dioxide from the atmosphere.

A study, conducted by researchers at the Monterey Bay Aquarium Research Institute and published last week in the journal Nature, used a novel laser system to provide 3D imaging of the deep sea animals and their mucous filters. The term “giant” is a bit of a misnomer. The animals range in size from less than one centimeter in length to a maximum size of nearly 10 centimeters. Despite their insubstantial bodies, larvaceans remove vast amounts of carbon-rich food out of the surrounding water, according to a statement from the Monterey Bay Aquarium Research Institute.

When their mucus filters become clogged, usually every 24 hours or so, the animals release the mucus, which sinks rapidly to the seafloor — bringing down a significant load of carbon to the deep sea floor and locking it away from reentering the atmosphere. This process removes both carbon dioxide and microplastics from the atmosphere.

“Mucus is ubiquitous in the ocean, and complex mucus structures are made by animals for feeding, health, and protection,” said Kakani Katija, principal engineer at Monterey Bay and the lead author on the new paper, in the statement. “Now that we have a way to visualize these structures deep below the surface we can finally understand how they function and what roles they play in the ocean.”

The larvaceans use their tails to constantly pump water through two filters — as much as 21 gallons an hour. The scientists calculated that the ones in Monterey Bay could filter all the water between 100 and 300 meters deep in as little as 13 days — equivalent to about 500 Olympic-sized swimming pools per hour, according to the Los Angeles Times.

That is increasingly important since scientists estimate that more than 99 percent of the planet’s biosphere resides in the oceans. Fishermen know its surface waters, but in general, compared to land, the global ocean is unknown, as The New York Times reports.

The oceans also play a vital role in trapping planet-warming greenhouse gas emissions. The oceans, which cover more than 70 percent of the earth’s surface, have absorbed more than one-fourth of the carbon humans have produced since the Industrial Revolution, and about 90 percent of the resulting heat, according to the Los Angeles Times.

“We’re just on the edge of this tremendous change in how we perceive and understand how the ocean works,” said Bruce Robison, a senior scientist at the Monterey Bay Aquarium Research Institute, according to the Los Angeles Times.

“If an alien civilization from some other solar system were to send an expedition to Earth to look at the dominant life forms on this planet, they wouldn’t be up here walking around with us. They’d be exploring the deep ocean.” To take a look at just how giant larvaceans used their mucus to capture carbon and microplastics, the scientists scanned the strange animals with lasers mounted onto a 12,000-pound robot, and then reconstructed the mucus structure into a 3D model.

As The New York Times explained, the system works similar to a CT scan for the human body. It emits a thin fan of laser light that scans through the animals, gathers backscattered rays from the inner flows and tissues, and feeds that information into a computer that reconstructs the living organisms in subtle detail.