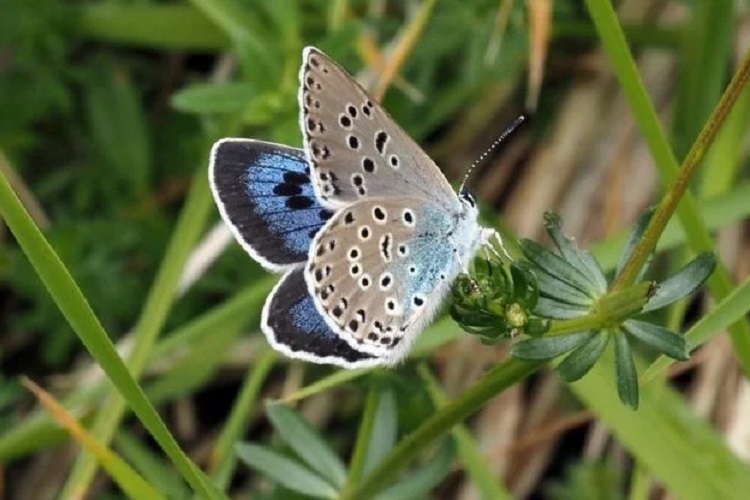 A large blue butterfly that was previously extinct has been successfully reintroduced to the UK, with the pollinator repopulating large parts of the country after an absence of 150 years.

Some 750 of the large blue butterflies, which are marked by distinct rows of black spots on its forewing, have been spotted this summer around Rodborough Common in Gloucestershire, southwest England – a higher number than anywhere else in the world.

In 1979, the butterfly was declared extinct and hasn’t been seen in the Rodborough region for 150 years. The Large Blue is one of the rarest of Britain’s Blue butterfly species, reports BBC.

Last year, conservationists released some 1,100 larvae to the region after meticulously preparing the landscape for the butterflies’ return.

Back from the brink…

The Large Blue Butterfly was declared extinct in Britain in 1979 but hard-working scientists have successfully brought it back. RH #KayBurley pic.twitter.com/p0qifegqzD

The globally endangered large blue butterfly has a unique life cycle that begins with tiny caterpillars tricking the area’s red ant population (myrmica sabuleti) into hauling them to their nest, while even “singing” to it, after which the parasitic larvae feast on ant grubs before emerging a year later as butterflies.

“In the summer when the ants are out foraging, nature performs a very neat trick — the ants are deceived into thinking that the parasitic larva of the large blue is one of their own and carry it to their nest,” said research ecologist David Simcox in a statement.

“It’s at this point that the caterpillar turns from herbivore to carnivore, feeding on ant grubs throughout the autumn and spring until it is ready to pupate and emerge the following summer.”

Controlling the red ant population was a crucial component of the project to reintroduce the blue butterflies.

For five years, a range of experts from the National Trust, Butterfly Conservation, the Limestone’s Living Legacies Back from the Brink project, Natural England, Royal Entomological Society and the Minchinhampton and Rodborough Committees of Commoners collaborated to prepare the area for the butterflies.

The reintroduction of the rare Large Blue Butterfly on Rodborough Common in #Stroud, declared extinct in Britain in 1979, is being hailed a success.

750 of them have been spotted this Summer! They were introduced on the Common last year. 🦋

Cattle grazing was kept in check and the area’s scrub cover was reined in to help the area’s ant population, while wild thyme and marjoram plant growth was encouraged to ensure that the butterflies have their natural source of food and egg-laying habitats.

“Butterflies are such sensitive creatures, and with the large blue’s particular requirements they are real barometers for what is happening with our environment and the changing climate,” said commons area ranger Richard Evans. “Creating the right conditions for this globally endangered butterfly to not only survive but to hopefully thrive has been the culmination of many years work.”

The butterfly was reintroduced to the UK after caterpillars were brought to the country from Sweden in an ecologist’s camper van, writes The Guardian.

Experts now say that the large blue butterfly has “stronghold” sites around the country and have also naturally colonized areas across southern England, reports CNN.

The return of the rare large blue to the region marks one of the most successful insect reintroduction projects to date, and marks the culmination of a nearly four-decade conservationist effort in Europe.

“One of the greatest legacies of the re-introduction is the power of working together to reverse the decline of threatened species and the benefit the habitat improvements will have for other plants, insects, birds and bats on the commons,” Evans said.