Entire Species Wiped Out by Australia Fires Over the Last Few Days, Including 25,000 Koalas 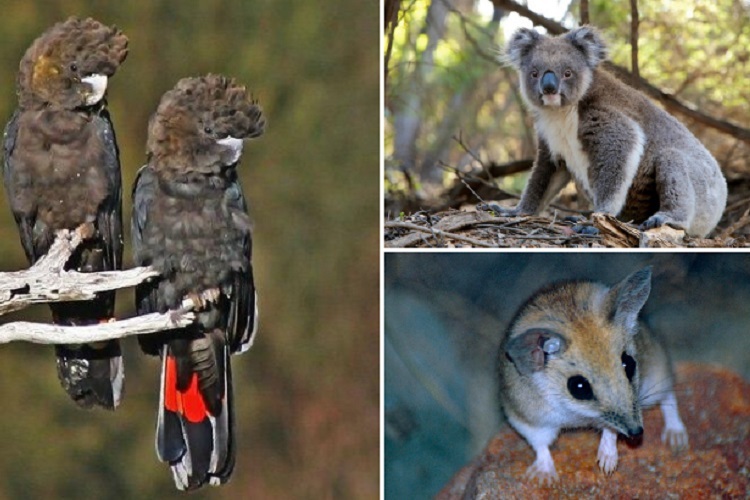 As Australia’s ongoing bushfire crisis continues to spread devastation across the island continent, wildlife experts and conservationists are warning of “catastrophic losses” including the elimination of entire species.

The news of entire species being lost comes after the fires burned a third of Kangaroo Island, an island off the country’s southern coast that is often seen as the Australian equivalent to the Galapagos Islands due to its rich biodiversity.

Small marsupials called dunnarts and glossy black cockatoos are among the creatures feared to have been entirely wiped out after the fires transformed much of the island into a “scorched wasteland.”

Ecologists are now rushing to rescue any surviving dunnarts from the devastated island “before they are completely gone,” the Independent reports.

Heidi Groffen, an ecologist and coordinator of the nonprofit Kangaroo Island Land for Wildlife, said that the tiny mouse-sized dunnarts are helpless because of their small size and inability to outrun the fast-moving blaze that laid waste to their habitat.

Only 300 dunnarts lived on the island, but she hopes that some were able to find refuge among rocky crevices and other small spaces.

As well as dunnarts also the primary population base of the tammar wallaby and the KI western grey kangaroo…and all the other amazing native mammals including koalas & possums.The entire west end of KI burnt. Birds like glossy black cockatoos, thick knees (stone curlews) too https://t.co/apEb7wJEbh

“Even if there are survivors, there is no food for them now.

We’re hoping to bring some into captivity before they are completely gone.”

“It’s early days, fires are still burning but we have lost a lot of critical refugia for endangered species which will affect long term viability of these species.

The Kangaroo Island dunnart is our main species of concern and it looks like its entire known [habitat] range has been fried. We are locating unburnt remnant patches of its habitat to see if we can locate it through camera trapping.”

Hodgens noted that now that the fires have subsided, their team would set about using camera traps to detect survivors, while drone mapping would also be used to detect pockets of surviving marsupials.

In addition to the dunnart, a rare flock of glossy black cockatoos is faced with an uncertain future after their habitat was reduced to ashes. While the cockatoos fared better than the dunnarts due to their ability to escape, they may starve to death after losing their source of food on the island.

Conservationists had dedicated 25 years to restoring the glossy black raven from 150, but all of their efforts have gone up in smoke in the span of a week.

There were less than 400 Kangaroo Island glossy black cockatoos alive before the fires started, and almost half of #KangarooIsland has now burned. 25 years of painstaking conservation efforts have just gone up in smoke. #AustraliaBurns, and we are not the only ones paying for it. pic.twitter.com/yno4Vyzm2b

Meanwhile, tens of thousands of koalas are feared to have perished after the island burned during what the local mayor called a “most devastating, shattering day” for the island community. Experts say that half of the 50,000-strong local koala population have been eliminated—a tremendous loss especially because the local population of the marsupials is considered the only one free of chlamydia, making the island’s koala’s an “insurance population” for the entire species.

“We are seeing kangaroos and koalas with their hands burned off—they stand no chance. It’s been quite emotional.

We will do whatever we can to rehabilitate the native wildlife but it’s going to take years to recover.”

Koalas that have suffered burns from the KI bushfire are being dropped off at the Kangaroo Island Wildlife Park. This mum and Joey were picked up by a CFS crew this morning #7NEWS pic.twitter.com/sd9rYhdXeX

Ecologists fear that nearly half a billion million mammals, reptiles and birds are estimated to have been killed since the fires broke out in September, although the current death toll is impossible to calculate.

The massive loss of life is already tipping the balance for entire species of animals and plants on an island continent where 87 percent of wildlife is endemic to the country, meaning it can only be found on Australia.

“In the longer term, the rebuilding of populations of many native species is going to be the issue.

A lot will have been undoubtedly very badly affected by these fires.”​