Detect, Deter and Annihilate: How the Police State Will Deal with a Coronavirus Outbreak 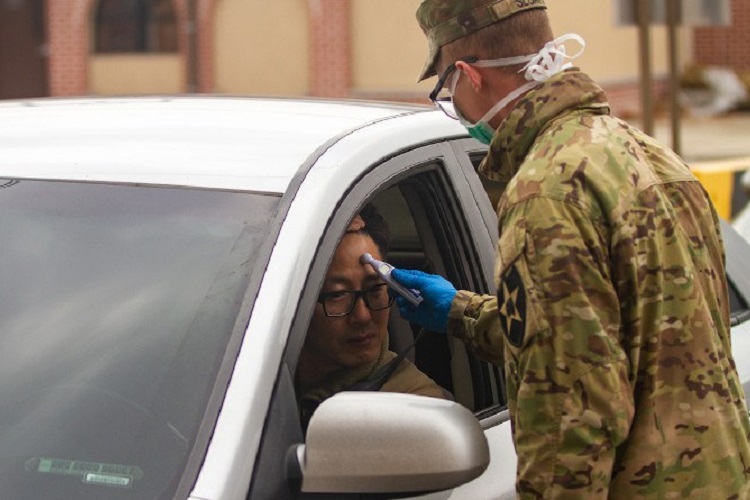 “Fear is a primitive impulse, brainless as hunger, and because the aim of horror fiction is the production of the deepest kinds of fears, the genre tends to reinforce some remarkably uncivilized ideas about self-protection. In the current crop of zombie stories, the prevailing value for the beleaguered survivors is a sort of siege mentality, a vigilance so constant and unremitting that it’s indistinguishable from the purest paranoia.”— Terrence Rafferty, New York Times

What do zombies have to do with the U.S. government’s plans for dealing with a coronavirus outbreak?

Read on, and I’ll tell you.

The zombie narrative was popularized by the hit television series The Walking Dead, in which a small group of Americans attempt to survive in a zombie-ridden, post-apocalyptic world where they’re not only fighting off flesh-eating ghouls but cannibalistic humans.

For a while there, zombies could be found lurking around every corner: wreaking havoc at gun shows, battling corsets in movies such as Pride and Prejudice and Zombies, and running for their lives in 5K charity races.

Understandably, zombie fiction plays to our fears and paranoia, while allowing us to “envision how we and our own would thrive if everything went to hell and we lost all our societal supports.” Yet as journalist Syreeta McFadden points out, while dystopian stories used to reflect our anxieties, now they reflect our reality, mirroring how we as a nation view the world around us, how we as citizens view each other, and most of all how our government views us.

Indeed, the U.S. government has spent a lot of time and energy in recent years using zombies as the models for a variety of crisis scenarios not too dissimilar from what we are currently experiencing.

For instance, back in 2015, the Centers for Disease Control and Prevention put together a zombie apocalypse preparation kit “that details everything you would need to have on hand in the event the living dead showed up at your front door.” The CDC, in conjunction with the Dept. of Defense, even used zombies to put government agents through their paces in mock military drills.

Fear the Walking Dead—AMC’s spinoff of its popular Walking Dead series—drove this point home by dialing back the clock to when the zombie outbreak first appears and setting viewers down in the midst of societal unrest not unlike our own experiences of recent years (“a bunch of weird incidents, police protests, riots, and … rapid social entropy”). Then, as Forbes reports, “the military showed up and we fast-forwarded into an ad hoc police state with no glimpse at what was happening in the world around our main cast of hapless survivors.”

Forbes found Fear’s quick shift into a police state to be far-fetched, but anyone who has been paying attention in recent years knows that the groundwork was laid long ago for the government—i.e., the military—to intervene and lock down the nation in the event of a national disaster.

We’re seeing this play out now as the coronavirus contagion spreads.

What we have yet to experience (although it may only be a matter of time) is that the government through the imposition of martial law could pose a greater threat to our safety (and our freedoms) than any virus.

As the Atlantic noted about Fear the Walking Dead: “The villains aren’t the zombies, who rarely appear, but the U.S. military, who sweep into an L.A. suburb to quarantine the survivors. Zombies are, after all, a recognizable threat—but Fear plumbs drama and horror from the betrayal by institutions designed to keep people safe.”

Why else would the government feel the need to monitor our communications, track our movements, criminalize our every action, treat us like suspects, and strip us of any means of defense while equipping its own personnel with an amazing arsenal of weapons?

For years now, the government has been carrying out military training drills with zombies as the enemy. In 2011, the DOD created a 31-page instruction manual for how to protect America from a terrorist attack carried out by zombie forces. In 2012, the CDC released a guide for surviving a zombie plague. That was followed by training drills for members of the military, police officers and first responders.

Coinciding with Halloween 2012, a five-day national conference was put on by the HALO Corp. in San Diego for more than 1,000 first responders, military personnel and law enforcement types. It included workshops produced by a Hollywood-affiliated firm in…overcoming a zombie invasion. Actors were made up to look like flesh-chomping monsters. The Department of Homeland Security even paid the $1,000 entry fees for an unknown number of participants…

[In October 2014], REI outdoor-gear stores in Soho and around the country are to hold free classes in zombie preparedness, which the stores have been providing for about three years.

The zombie exercises appeared to be kitschy and fun—government agents running around trying to put down a zombie rebellion—but what if the zombies in the exercises were us, the citizenry, viewed by those in power as mindless, voracious, zombie hordes?

Consider this: the government started playing around with the idea of using zombies as stand-ins for enemy combatants in its training drills right around the time the Army War College issued its 2008 report, warning that an economic crisis in the U.S. could lead to massive civil unrest that would require the military to intervene and restore order.

That same year, it was revealed that the government had amassed more than 8 million names of Americans considered a threat to national security, to be used “by the military in the event of a national catastrophe, a suspension of the Constitution or the imposition of martial law.” The program’s name, Main Core, refers to the fact that it contains “copies of the ‘main core’ or essence of each item of intelligence information on Americans produced by the FBI and the other agencies of the U.S. intelligence community.”

Also in 2008, the Pentagon launched the Minerva Initiative, a $75 million military-driven research project focused on studying social behavior in order to determine how best to cope with mass civil disobedience or uprisings. The Minerva Initiative has funded projects such as “Who Does Not Become a Terrorist, and Why?” which “conflates peaceful activists with ‘supporters of political violence’ who are different from terrorists only in that they do not embark on ‘armed militancy’ themselves.”

In 2009, the Dept. of Homeland Security issued its reports on Rightwing and Leftwing Extremism, in which the terms “extremist” and “terrorist” were used interchangeably to describe citizens they perceived to be disgruntled or anti-government.

Meanwhile, a government campaign was underway to spy on Americans’ mail, email and cell phone communications. News reports indicate that the U.S. Postal Service has handled more than 150,000 requests by federal and state law enforcement agencies to monitor Americans’ mail, in addition to photographing every piece of mail sent through the postal system.

Fast forward a few years more and local police were being transformed into extensions of the military, taught to view members of their community as suspects, trained to shoot first and ask questions later, and equipped with all of the technology and weaponry of a soldier on a battlefield.

The Obama administration then hired a domestic terrorism czar whose job is to focus on anti-government American “extremists” who have been designated a greater threat to America than ISIS or al Qaeda. As part of the government’s so-called war on right-wing extremism, the Obama administration agreed to partner with the United Nations to take part in its Strong Cities Network program, which is training local police agencies across America in how to identify, fight and prevent extremism.

Nothing has changed for the better under the Trump Administration.

Those who believe in and exercise their rights under the Constitution (namely, the right to speak freely, worship freely, associate with like-minded individuals who share their political views, criticize the government, own a weapon, demand a warrant before being questioned or searched, or any other activity viewed as potentially anti-government, racist, bigoted, anarchic or sovereign), continue to be promoted to the top of the government’s terrorism watch list.

“We the people” or, more appropriately, “we the zombies” are the enemy in the eyes of the government. This coronavirus merely ups the ante.

So when presented with the Defense Department’s battle plan for defeating an army of the walking dead, you might find yourself tempted to giggle over the fact that a taxpayer-funded government bureaucrat actually took the time to research and write about vegetarian zombies, evil magic zombies, chicken zombies, space zombies, bio-engineered weaponized zombies, radiation zombies, symbiant-induced zombies, and pathogenic zombies.

However, in an age of extreme government paranoia, this is no laughing matter.

The DOD’s strategy for dealing with a zombie uprising, outlined in “CONOP 8888,” is for all intents and purposes a training manual for the government in how to put down a citizen uprising or at least an uprising of individuals “infected” with a dangerous disease or dangerous ideas about freedom.

Rest assured that the tactics and difficulties outlined in the “fictional training scenario” are all too real, beginning with martial law.

As the DOD training manual states: “zombies [stand-ins for “we the people”] are horribly dangerous to all human life and zombie infections have the potential to seriously undermine national security and economic activities that sustain our way of life. Therefore having a population that is not composed of zombies or at risk from their malign influence is vital to U.S. and Allied national interests.”

So how does the military plan to put down a zombie (a.k.a. citizen) uprising?

Phase 1 (Deter): Recognize that zombies cannot be deterred or reasoned with. Carry out training drills to discourage other countries from developing or deploying attack zombies and publicly reinforce the government’s ability to combat a zombie threat. Initiate intelligence sharing between federal and state agencies. Assist the Dept. of Homeland Security in identifying or discouraging immigrants from areas where zombie-related diseases originate.

Phase 2 (Seize initiative): Recall all military personal to their duty stations. Fortify all military outposts. Deploy air and ground forces for at least 35 days. Carry out confidence-building measures with nuclear-armed peers such as Russia and China to ensure they do not misinterpret the government’s zombie countermeasures as preparations for war. Establish quarantine zones. Distribute explosion-resistant protective equipment. Place the military on red alert. Begin limited scale military operations to combat zombie threats. Carry out combat operations against zombie populations within the United States that were “previously” U.S. citizens.

Phase 3 (Dominate): Lock down all military bases for 30 days. Shelter all essential government personnel for at least 40 days. Equip all government agents with military protective gear. Issue orders for military to kill all non-human life on sight. Initiate bomber and missile strikes against targeted sources of zombie infection, including the infrastructure. Burn all zombie corpses. Deploy military to lock down the beaches and waterways.

Phase 4 (Stabilize): Send out recon teams to check for remaining threats and survey the status of basic services (water, power, sewage infrastructure, air, and lines of communication). Execute a counter-zombie ISR plan to ID holdout pockets of zombie resistance. Use all military resources to target any remaining regions of zombie holdouts and influence. Continue all actions from the Dominate phase.

As I point out in my book, Battlefield America: The War on the American People, if there is any lesson to be learned, it is simply this: whether the threat to national security comes in the form of imaginary zombies, actual terrorists, American citizens infected with the coronavirus, or disgruntled American citizens infected with dangerous ideas about freedom, the government’s response to such threats remains the same: detect, deter and annihilate.