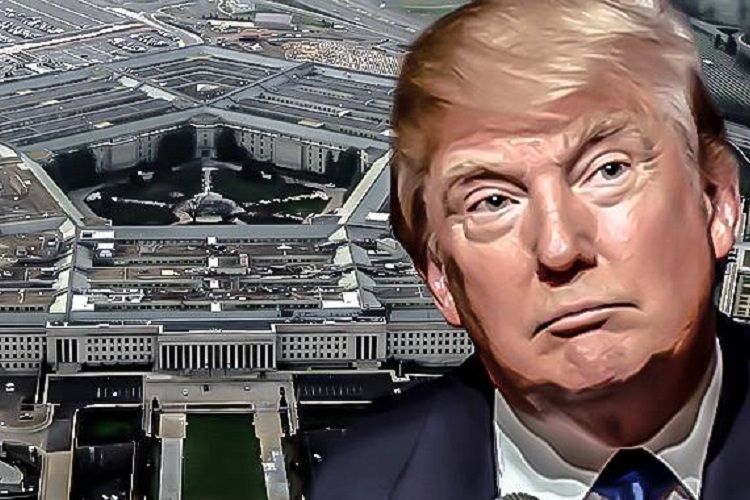 There are many who accuse U.S. President Donald Trump of “wagging the dog” when it comes to the recent bombing that killed Al Quds commander Qassem Soleimani due to the fact he is facing impeachment. While many media outlets have stated this accusation suggesting the assassination of Iran’s Soleimani was pre-planned, to this writer’s knowledge no one has pointed out that five total Pentagon officials resigned prior to the murder or Eric Trump’s strange tweet about “opening a can of whoop ass,” right before the New Year.

Wag the Dog was released one month before the outbreak of the Lewinsky scandal and the subsequent bombing of the Al-Shifa pharmaceutical factory in Sudan by the Clinton administration in August 1998, which prompted the media to draw comparisons between the film and reality. The comparison was also made in December 1998 when the administration initiated a bombing campaign of Iraq during Clinton’s impeachment trial over the Lewinsky scandal. – Wikipedia

Although the evidence is not directly from documents, it’s worth mentioning that prior to the assassination of Soleimani a total of five high-ranking Pentagon officials resigned, The Hill reported. Those officials were — Ambassador Tina Kaidanow, senior adviser for international cooperation; Randall Schriver, the top Asia policy official; Jimmy Stewart, the acting undersecretary of defense for personnel and readiness; Steven Walker, head of the Defense Advanced Research Projects Agency and Kari Bingen; principal deputy undersecretary of defense for intelligence.

Many said they were resigning for various different reasons but the probability of all resigning at once before a big move that could spark global conflict is slim to none.  This may be because the option for killing Soleimani was presented around this time which many saw as a potential “war move” and these Pentagon officials didn’t want to be involved with the next conflict. Entirely speculation, but warranted, since if we dig even deeper we can see this option indeed was presented to Trump as an “extreme measure” according to government officials who spoke under the condition of anonymity to the New York Times. Further, former National Security Adviser John Bolton, also tweeted that it was “long in the making,” congratulating his former administration.

Congratulations to all involved in eliminating Qassem Soleimani. Long in the making, this was a decisive blow against Iran's malign Quds Force activities worldwide. Hope this is the first step to regime change in Tehran.

Trump’s own son, Eric Trump, also issued a strange tweet on December 31st which suggested foreknowledge of the assassination of Soleimani. This tweet is significant since on December 28th The Last American Vagabond reported: “An American Was Just Killed In A Rocket Attack In Iraq Just After Pompeo Set The Stage To Blame Iran.”

Why (the better question is HOW) did @EricTrump know anything about this in advance…and why has he since deleted this tweet? pic.twitter.com/0xKbTweQVs

It is also worth noting that people high up in the Pentagon in the year 2001 planned 7 wars with 5 countries as 4-star U.S. General Wesley Clark stated.

In 2007, Clark revealed that high top brass at the Pentagon in 2001, mere weeks after 9/11, planned to invade seven countries within five years with the last remaining country being, you guessed it: Iran!

Now why would war hawks suddenly want a war with Iran? Perhaps it is due to the fact that a new oil field which would increase Iran’s proven reserves by about a third was discovered months ago, as the BBC reported.

This oil field would account for 53 billion barrels of crude oil, according to Iranian President Hassan Rouhani. This is significant since when the U.S. looked to be ready to invade Venezuela, John Neo-con Bolton as the former National Security Adviser told the truth to the world when he slipped up on Fox News by stating it’s all about the oil, as TeleSur reported.

“It will make a big difference to the United States economically if we could have American oil companies invest in and produce the oil capabilities in Venezuela,” Bolton told Fox News in an interview this week.

Things seem to have calmed down for now, with Trump declaring de-escalation efforts. But the evidence of oil found in Iran prior to Soleimani’s assassination and the resignation of Pentagon officials can’t be ignored. The House which is held by Democrats has passed a resolution to limit Trump’s military actions in Iran, using the 1973 War Powers Act. The bill now heads to the Senate.

Another key fact that needs to be looked at is, ironically, U.S. Col Douglas Macgregor warned Trump about false flag attempts to get him into war using his favorite TV network Fox News in 2019.

“I think the president needs to watch carefully for the potential for something like the Gulf of Tonkin incident,” Col. Macgregor said. “Many of your viewers may not remember that it never happened and we could very well be treated to something like that in the Gulf. We should watch for that, and this is an example of President Trump’s comments on fake news, he should not be sabotage by fake news.”

All of this is a hell of a coincidence; and as Joseph P. Kennedy (John F. Kennedy’s father) said to a reporter in the 1960s, “There are no accidents in politics.”