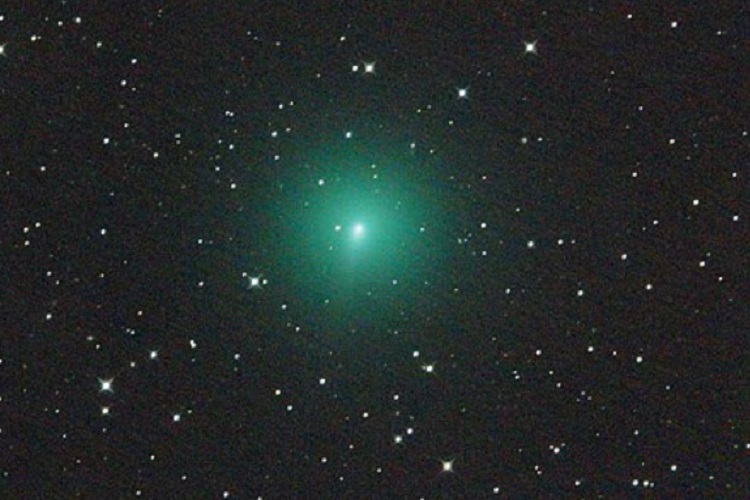 A comet that hasn’t visited our solar system in about 5,500 years will become visible to the naked eye later this month, gracing skies in the northern hemisphere.

It is believed that the bright comet’s visit to our neighborhood may coincide with the coronavirus pandemic reaching its peak, reports Forbes.

The comet will be at its brightest at the end of April/beginning of May. Use this sky chart to see where Comet Atlas is now and find it yourself with a telescope. If we’re lucky, Comet Atlas will be visible with binoculars or the naked eye on or around April 30. According to health.com, the Institute for Health Metrics and Evaluation (IHME) estimates the coronavirus pandemic will reach its peak in mid to late April.

It has been described as resembling a large and dirty snowball, but astronomers are hoping the celestial body will put on a bright, brilliant show—not unlike the Hale-Bopp comet which flew close to Earth back in 1997.

#Comet ATLAS on March 29th. https://t.co/QaTWFWcA0w A tail is starting to develop. Lets hope it lives up to expectations – a decent comet is long overdue! pic.twitter.com/BuO3iyXhjV

“Comets tend to develop long, fluorescent tails as they approach the sun before swinging back out into outer space.

We hope that it will become visible to the naked eye in early April reaching closest approach to earth on May 23.

Coming to within 100 million miles of the earth, very close in astronomical terms, it presents no risk to the earth, but does have the potential to lift people’s spirits as we go through the current crisis.”

McManus, who has a 4.5-inch refracting telescope at his East Yorkshire home, noted that a small set of binoculars will be sufficient to view the comet.

“Look to the Northern sky. The comet should appear between the Plough and the planet Venus, easily the brightest object in the night sky at the moment other than the moon.

We are hoping it will be as spectacular as Hale-Bopp, which was visible in daylight.”

We don’t know the precise composition of the comet—it could be 90 per cent ice or 90 per cent dust and that could effect whether it throws off a spectacular tail as it gets closer to the sun and the sun’s gravity takes effect.”

While the comet’s timing may shock some readers—especially due to a long history of superstitious beliefs and misperceptions about comets—it’s important to remember that these beautiful spectacles are little more than space dust, ice, and gas that pose no real threat to terrestrial life.