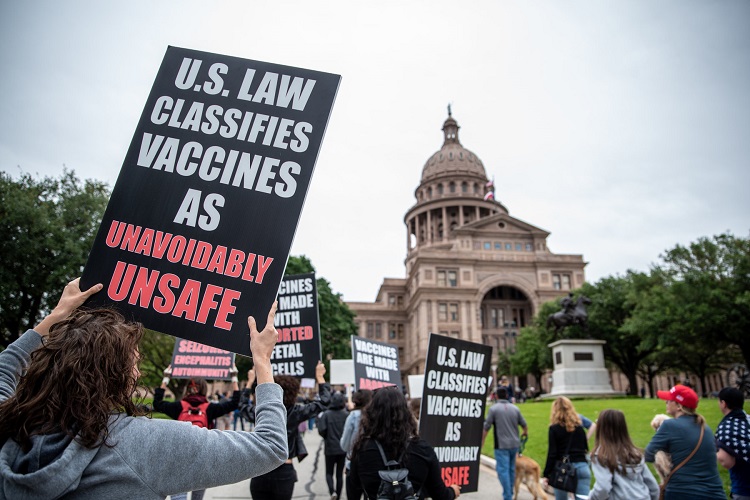 New York — Last month, Assemblymember Linda Rosenthal — who is not a doctor, nor a scientist and holds only a bachelor’s degree in history — proposed a massively controversial bill that would mandate the COVID-19 vaccination for New Yorkers. Naturally, she is being met with resistance.

According to the NY Times, Rosenthal says her parents escaped Nazi Germany in the 30’s to come to America. Ironically enough, it was the Nazis who were famous for forcing medical procedures on citizens against their will. Now, Rosenthal has come full circle and is embracing the very ideology her parents fled.

“If enough science deniers opt out of the voluntary vaccine process, we will not achieve the necessary level of community immunity, which will undermine the efficacy of our vaccination efforts statewide,” Rosenthal said in a recent interview after proposing the controversial bill, No. A11179, which says the state can mandate vaccination if the level of voluntary vaccination is not high enough to result in herd immunity.

But is it really denying science to question the safety of a vaccine that has not been tested in the long term?

As TFTP has reported, the COVID-19 vaccine itself is controversial given its rush to market. Never before in history has a vaccine been developed and approved in under 9 months. By the very definition, this vaccine’s long term results are entirely unknown.

While those who don’t blindly trust a fast-tracked vaccine are being labelled as kooks and anti-vaxxers, the reality is that these vaccine manufacturers and their government enablers have given us every reason in the world not to trust them.

The resistance to the vaccine is also growing by the day, up to and including health care workers. Are these trained doctors and nurses working the front lines of the pandemic, “science deniers”? We think not.

Evidence of the sheer opposition to forced vaccination came to a head this week as two groups — who the media tells to hate each other — came together to raise awareness to Rosenthal’s bill.

Black Lives Matter and MAGA supporters reportedly threw their differences to the wayside to come together in protest of Bill No. A1179.  The event organizer, Cara Castronuova, documented the protest on her Facebook page.

#MAGA and #BLM came TOGETHER yesterday for a common cause. YES, you heard that right. I personally co-organized a Demonstration with a BLM organizer named Hannah, to fight the Bill proposed by NYS Assemblywoman Linda Rosenthal that will make the Covid Vaccination MANDATORY for all New Yorkers.

Castronuova says the two groups came together to peacefully exercise their first amendment right outside Rosenthal’s apartment, striking directly at the root. Castronuova explained that that this was sort of a test run and they deliberately kept it small and did not invite the media.

I was initially nervous about it. We intentionally kept it small & did not publicize the event or invite media because most of them bring disruption & twist tales. We just wanted to make this happen and hopefully set off a positive chain reaction.

Castronuova said that their message was well received by passersby, illustrating the fact that people don’t like to be forced into medical decisions against their will. She said random strangers came up and thanked them for what they were doing.

So many people came up to us THANKING us for what we were doing, and were really receptive to hearing what we had to say.

Showing that two groups who are told to hate each other can overcome their differences for a common cause, there was no tension at all and the group successfully made their point.

The day went beautifully. The energy was spectacular. Only love and respect. Two different groups that have been painted as enemies coming together for a common cause. I am hoping this sparks something that keeps growing in a positive direction. I am hopeful about 2021.

We hope so too Castronuova. After posting photos of the event, Castronuova closed out the post with some inspiring words of unity.

NOOOOO, your enemy is not your cousin Vinny, the elderly Trump supporting lady next door, or the BLM activist kid down the block that you watched grow up. How sad is it that THEY have us believing this BULLS**T?!?!!!!! NO MORE.

The real enemy is #MainstreamMedia #BigPharma #DeepState #BigTech #CorruptPoliticians #CorruptGovernment. We have to start identifying who the Real Enemy is, and that is NOT each other!

When two opposing groups come together to oppose tyranny, this is a good thing. America needs more of this, and fast. As the mainstream media will most assuredly not report this story, please share it with others to show them the message that it is not us vs. them, it is us vs. tyranny.

**This article (BLM And MAGA Come Together To Oppose Forced Vaccination Bill In New York) was originally published at The Free Thought Project and is re-posted here with permission.**