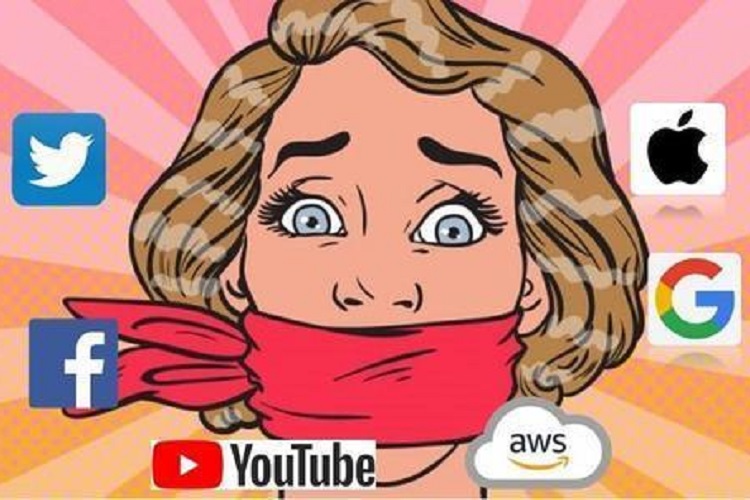 “In a corporatist system of government, wherein there is no meaningful separation between corporate power and state power, corporate censorship is state censorship.”

Those were the prophetic words of Caitlin Johnstone in 2018 warning of the slippery slope that Big Tech and its liberal minions were embarking on as the corporate-sponsored cancel-culture began.

In 2018, representatives of Facebook, Twitter, and Google were instructed on the US Senate floor that it is their responsibility to “quell information rebellions” and adopt a “mission statement” expressing their commitment to “prevent the fomenting of discord.”

“Civil wars don’t start with gunshots, they start with words,” the representatives were told.

“America’s war with itself has already begun. We all must act now on the social media battlefield to quell information rebellions that can quickly lead to violent confrontations and easily transform us into the Divided States of America.”

And now, 3 years later, all the ‘behind the scenes’ nods and winks are gone and conspiracy theories proved fact as Reuters reports The White House has been reaching out to social media companies including Facebook, Twitter and Alphabet Inc’s Google about clamping down on COVID misinformation and getting their help to stop it from going viral, a senior administration official said.

“Disinformation that causes vaccine hesitancy is going to be a huge obstacle to getting everyone vaccinated and there are no larger players in that than the social media platforms,” a source with direct knowledge about the cooperation told Reuters.

The White House previously acknowledged working with tech giants like Facebook and Google on the issue, but direct engagement was not confirmed, Reuters said.

The source told Reuters that the companies “were receptive” as they engaged with the White House. “But it is too soon to say whether or not it translates into lessening the spread of misinformation.”

Every time the dangers of a few Silicon Valley plutocrats controlling all new media political discourse with an iron fist are pointed out, Democratic Party loyalists all turn into a bunch of hardline free market Ayn Rands.

“It’s not censorship!” they exclaim. “It’s a private company and can do whatever it wants with its property!”

Except now, that ‘private’ entity is working directly for the government as the Biden administration is not even trying to hide the relationship.

So, it turns out Johnstone was right: “In a corporatist system of government, wherein there is no meaningful separation between corporate power and state power, corporate censorship is state censorship.”

As John Whitehead warned this week:  This is the slippery slope that leads to the end of free speech as we once knew it.

“If liberty means anything at all, it means the right to tell people what they do not want to hear.” – George Orwell