Authoritarian Madness: The Slippery Slope from Lockdowns to Concentration Camps 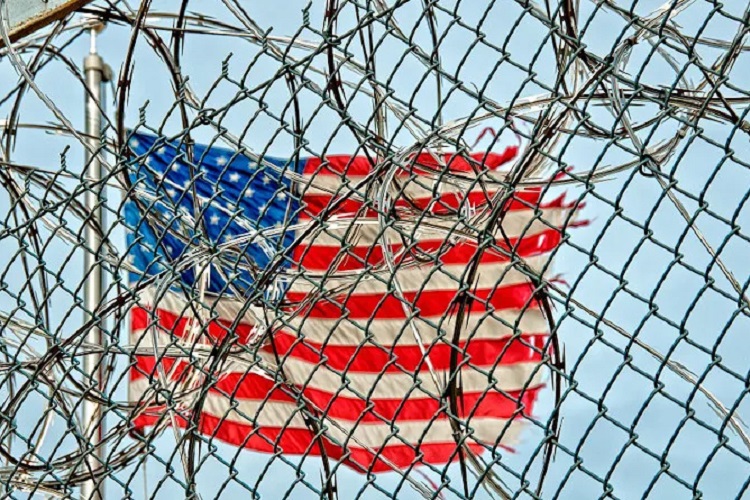 “All the Dachaus must remain standing. The Dachaus, the Belsens, the Buchenwald, the Auschwitzes—all of them. They must remain standing because they are a monument to a moment in time when some men decided to turn the Earth into a graveyard. Into it they shoveled all of their reason, their logic, their knowledge, but worst of all, their conscience. And the moment we forget this, the moment we cease to be haunted by its remembrance, then we become the gravediggers.”— Rod Serling, Deaths-Head Revisited

In the politically charged, polarizing tug-of-war that is the debate over COVID-19, we find ourselves buffeted by fear over a viral pandemic that continues to wreak havoc with lives and the economy, threats of vaccine mandates and financial penalties for noncompliance, and discord over how to legislate the public good without sacrificing individual liberty.

The discord is getting more discordant by the day.

Just recently, for instance, the Salt Lake Tribune Editorial Board suggested that government officials should mandate mass vaccinations and deploy the National Guard “to ensure that people without proof of vaccination would not be allowed, well, anywhere.”

In other words, lock up the unvaccinated and use the military to determine who gets to be “free.”

These tactics have been used before.

This is why significant numbers of people are worried: because this is the slippery slope that starts with well-meaning intentions for the greater good and ends with tyrannical abuses no one should tolerate.

In Italy, the unvaccinated are banned from restaurants, bars and public transportation, and could face suspensions from work and monthly fines. Similarly, France will ban the unvaccinated from most public venues.

In Austria, anyone who has not complied with the vaccine mandate could face fines up to $4100. Police will be authorized to carry out routine checks and demand proof of vaccination, with penalties of as much as $685 for failure to do so.

In China, which has adopted a zero tolerance, “zero COVID” strategy, whole cities—some with populations in the tens of millions—are being forced into home lockdowns for weeks on end, resulting in mass shortages of food and household supplies. Reports have surfaced of residents “trading cigarettes for cabbage, dishwashing liquid for apples and sanitary pads for a small pile of vegetables. One resident traded a Nintendo Switch console for a packet of instant noodles and two steamed buns.”

For those unfortunate enough to contract COVID-19, China has constructed “quarantine camps” throughout the country: massive complexes boasting thousands of small, metal boxes containing little more than a bed and a toilet. Detainees—including children, pregnant women and the elderly— were reportedly ordered to leave their homes in the middle of the night, transported to the quarantine camps in buses and held in isolation.

If this last scenario sounds chillingly familiar, it should.

Eighty years ago, another authoritarian regime established more than 44,000 quarantine camps for those perceived as “enemies of the state”: racially inferior, politically unacceptable or simply noncompliant.

While the majority of those imprisoned in the Nazi concentration camps, forced labor camps, incarceration sites and ghettos were Jews, there were also Polish nationals, gypsies, Russians, political dissidents, resistance fighters, Jehovah’s Witnesses, and homosexuals.

Culturally, we have become so fixated on the mass murders of Jewish prisoners by the Nazis that we overlook the fact that the purpose of these concentration camps were initially intended to “incarcerate and intimidate the leaders of political, social, and cultural movements that the Nazis perceived to be a threat to the survival of the regime.”

“Most prisoners in the early concentration camps were political prisoners—German Communists, Socialists, Social Democrats—as well as Roma (Gypsies), Jehovah’s Witnesses, homosexuals, and persons accused of ‘asocial’ or socially deviant behavior. Many of these sites were called concentration camps. The term concentration camp refers to a camp in which people are detained or confined, usually under harsh conditions and without regard to legal norms of arrest and imprisonment that are acceptable in a constitutional democracy.”

How do you get from there to here, from Auschwitz concentration camps to COVID quarantine centers?

You don’t have to be unvaccinated or a conspiracy theorist or even anti-government to be worried about what lies ahead. You just have to recognize the truth in the warning: power corrupts, and absolute power corrupts absolutely.

This is not about COVID-19. Nor is it about politics, populist movements, or any particular country.

This is about what happens when good, generally decent people—distracted by manufactured crises, polarizing politics, and fighting that divides the populace into warring “us vs. them” camps—fail to take note of the looming danger that threatens to wipe freedom from the map and place us all in chains.

It’s about what happens when any government is empowered to adopt a comply-or-suffer-the-consequences mindset that is enforced through mandates, lockdowns, penalties, detention centers, martial law, and a disregard for the rights of the individual.

The slippery slope begins in just this way, with propaganda campaigns about the public good being more important than individual liberty, and it ends with lockdowns and concentration camps.

The danger signs are everywhere.

Claudio Ronco, a 66-year-old Orthodox Jew and a specialist in 18th-century music, recognizes the signs. Because of his decision to remain unvaccinated, Ronco is trapped inside his house, unable to move about in public without a digital vaccination card. He can no longer board a plane, check into a hotel, eat at a restaurant or get a coffee at a bar. He has been ostracized by friends, shut out of public life, and will soon face monthly fines for insisting on his right to bodily integrity and individual freedom.

For all intents and purposes, Ronco has become an undesirable in the eyes of the government, forced into isolation so he doesn’t risk contaminating the rest of the populace.

This is the slippery slope: a government empowered to restrict movements, limit individual liberty, and isolate “undesirables” to prevent the spread of a disease is a government that has the power to lockdown a country, label whole segments of the population a danger to national security, and force those undesirables—a.k.a. extremists, dissidents, troublemakers, etc.—into isolation so they don’t contaminate the rest of the populace.

The world has been down this road before, too.

Others have ignored the warning signs. We cannot afford to do so.

As historian Milton Mayer recounts in his seminal book on Hitler’s rise to power, They Thought They Were Free:

The German people chose to ignore the truth and believe the lie.

They were not oblivious to the horrors taking place around them. As historian Robert Gellately points out, “[A]nyone in Nazi Germany who wanted to find out about the Gestapo, the concentration camps, and the campaigns of discrimination and persecutions need only read the newspapers.”

The warning signs were there, blinking incessantly like large neon signs.

“Still,” Gellately writes, “the vast majority voted in favor of Nazism, and in spite of what they could read in the press and hear by word of mouth about the secret police, the concentration camps, official anti-Semitism, and so on. . . . [T]here is no getting away from the fact that at that moment, ‘the vast majority of the German people backed him.’”

Half a century later, the wife of a prominent German historian, neither of whom were members of the Nazi party, opined: “[O]n the whole, everyone felt well. . . . And there were certainly eighty percent who lived productively and positively throughout the time. . . . We also had good years. We had wonderful years.”

Life is good in America, too, as long as you’re able to keep cocooning yourself in political fantasies that depict a world in which your party is always right and everyone else is wrong, while distracting yourself with bread-and-circus entertainment that bears no resemblance to reality.

Indeed, life in America may be good for the privileged few who aren’t being locked up, locked down, discriminated against, persecuted, starved, beaten, shot, stripped, jailed or killed, but it’s getting worse by the day for the rest of us.

Which brings me back to the present crisis: COVID-19 is not the Holocaust, and those who advocate vaccine mandates, lockdowns and quarantine camps are not Hitler, but this still has the makings of a slippery slope.

The means do not justify the ends: we must find other ways of fighting a pandemic without resorting to mandates and lockdowns and concentration camps. To do otherwise is to lay the groundwork for another authoritarian monster to rise up and wreak havoc.

If we do not want to repeat the past, then we must learn from past mistakes.

January 27 marks Remembrance Day, the anniversary of the liberation of Auschwitz-Birkenau, a day for remembering those who died at the hands of Hitler’s henchmen and those who survived the horrors of the Nazi concentration camps.

Yet remembering is not enough. We can do better. We must do better.

As I make clear in my book Battlefield America: The War on the American People and in its fictional counterpart The Erik Blair Diaries, the world is teetering on the edge of authoritarian madness.

All it will take is one solid push for tyranny to prevail.