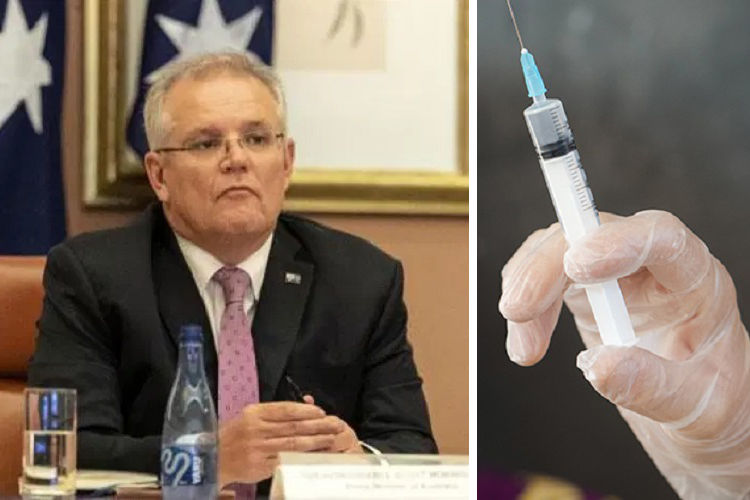 For those fearing that all the prior state-enforced social distancing and lockdown protocol which hit a peak in early summer — from arresting surfers on empty beaches, to telling people they can’t even jog, to police detaining moms for merely letting their children play on taxpayer bought public playgrounds — would only too easily and hastily transition to a forced vaccination regimen the moment one is rushed out despite safety or the various potential long-term side effect ‘unknowns’… well,it’s happening:

Australians are likely to face mandatory coronavirus vaccinations if Prime Minister Scott Morrison gets his wish.

The nation is a step closer to gaining access to a vaccine, with the Federal Government securing an international deal to produce a vaccine frontrunner locally if trials succeed.

If that happens, Mr Morrison expects Australians will have to undergo mandatory vaccination.

And no doubt other developed nations will eventually follow suit, given as we’ve detailed we’re already to the point of colleges, schools, and office spaces in many instances requiring as a condition of return to campus or work space a COVID-19 test, or in some cases individuals are subject to weekly tests. Based on the trend, these current testing requirements will seamlessly switch to vaccination requirements, as will apparently likely happen in Australia.

“I would expect it to be as mandatory as you could possibly make it,” PM Morrison told Melbourne radio station 3AW, as reported by the national Australian Broadcasting Corporation on Wednesday.

“There are always exemptions for any vaccine on medical grounds, but that should be the only basis,” he added, clearly already attempting to bat down instances of vaccine objectors and other individual liberty or religious-based arguments.

“We are talking about a pandemic that has destroyed the global economy and taken the lives of hundreds of thousands all around the world, and over 430 Australians here,” the Australian leader added.

He further confirmed the Australian government had reached deal with Swedish-British pharmaceutical company AstraZeneca to purchase a promising coronavirus vaccine currently under development with Oxford University.

Morrison described that the Federal Government plans manufacture it as soon as it clears clinical trails, and the drug will be free for all Australians.

But as activists who might have legitimate concerns over the federal government mandating that a substance without an established and lengthy track record of medical use be injected in each individual’s body as a precondition to participating in society (such as school or entering public buildings) would point out, it will indeed come with a “cost” in terms of freedom of conscience and an individual’s right to manage risk and trade-offs for themselves.

As Australia’s ABC put it, the government will rely on its “no jab, no play” precedent in terms of ‘up to date vaccination’ – already in effect and a requirement for children to attend everything from child care to school to a household’s ability to get a Family Tax Benefit across most provinces.

Morrison emphasized that anti-vaccination activists will not have a leg to stand on:

During a round of morning media, Mr Morrison repeatedly said he expected pushback from anti-vaccination campaigners.

But he repeatedly said he was the minister who introduced a “no jab, no play” rule, and his stance on vaccinations was clear and would not change.

n terms of a timeline, Morrison said he didn’t expect a vaccine to be available to the public until sometime next year at the earliest.

An essentially “forced” vaccine program would likely also roll out in the UK, Europe, and Canada, and by then debate would surely be raging in the United States (though the “debate” might be entirely precluded by then) given it remains the world’s leader in COVID-19 confirmed infections.

But when Australia and Europe rolls out with mandatory programs, it’s only a matter of time before the global hotspot – the US – follows suit, and backed by federal or state laws to boot.

Get ready to “show your papers”. It’s coming.