As Reports of Deaths After COVID Vaccines Near 16,000, CDC Urges Pregnant Women to Get the Vaccine 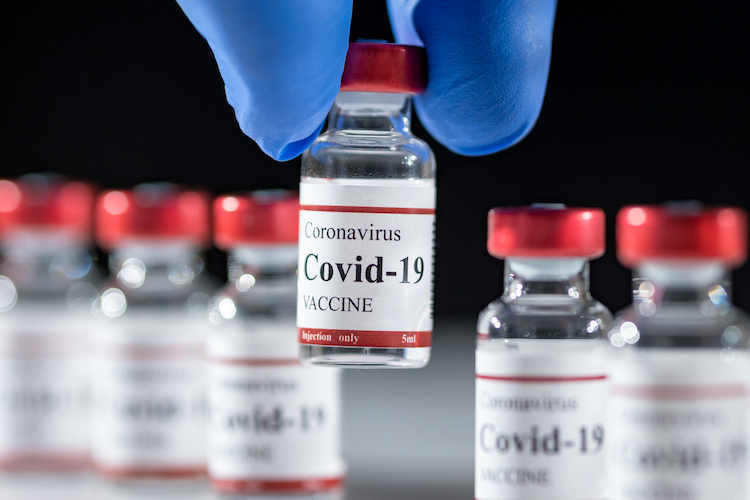 Data released Friday by the Centers for Disease Control and Prevention (CDC) showed that between Dec. 14, 2020 and Sept. 24, 2021, a total of 752,803 adverse events following COVID vaccines were reported to the Vaccine Adverse Event Reporting System (VAERS). The data included a total of 15,937 reports of deaths — an increase of 551 over the previous week.

There were 105,758 reports of serious injuries, including deaths, during the same time period — up 6,348 compared with the previous week. 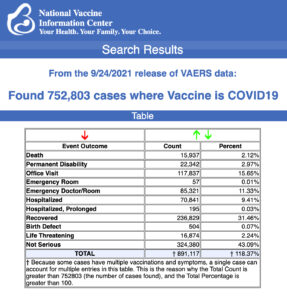 The data come directly from reports submitted to VAERS, the primary government-funded system for reporting adverse vaccine reactions in the U.S.

Every Friday, VAERS makes public all vaccine injury reports received as of a specified date, usually about a week prior to the release date. Reports submitted to VAERS require further investigation before a causal relationship can be confirmed.
Historically, VAERS has been shown to report only 1% of actual vaccine adverse events.

Other recent reported deaths include two patients [VAERS I.D. 1655100] who died after their second dose of Pfizer, including a 13-year-old female, a 15-year-old boy (VAERS I.D. 1498080) who previously had COVID, was diagnosed with cardiomyopathy in May 2021 and died four days after receiving his second dose of Pfizer’s vaccine when he collapsed on the soccer field and went into ventricular tachycardia; and a 13-year-old girl (VAERS I.D. 1505250) who died after suffering a heart condition after receiving her first dose of Pfizer.

The CDC on Wednesday issued its strongest guidance to date urging pregnant women and those who recently gave birth to be vaccinated against COVID. A total of 161 pregnant women have died of COVID, the CDC said, including 22 deaths in August.

“CDC strongly recommends COVID-19 vaccination either before or during pregnancy because the benefits of vaccination outweigh known or potential risks,” the agency said in a health alert. To date, only 31% of pregnant people have been vaccinated, the CDC said.

The CDC said COVID during pregnancy can cause preterm birth or sick babies that require intensive care. “Other adverse pregnancy outcomes, such as stillbirth, have been reported,” the CDC said.

However, as of Sept 24, CDC VAERS data show 3,823 pregnant women have reported adverse events related to COVID vaccines, including 1,144 reports of miscarriage or premature birth — a far greater number than the statistics the CDC used to justify its “urgent” recommendation that pregnant woman get vaccinated.

In an exclusive interview with The Defender, 40-year-old Kristi Dobbs said she’s spent nine months pleading with U.S. health agencies to research the neurological injuries she developed after receiving Pfizer’s COVID vaccine, only to be ignored after she provided the National Institutes of Health (NIH) blood samples for research.

#TheDefender Exclusive Interview: Kristi Dobbs recounted how she’s spent 9 months pleading w/health agencies to research neurological injuries she developed after Pfizer’s vaccine + how she is trying to get word out about vaccine’s potential risks.https://t.co/WFyuobbEFF

Dobbs received her first and only dose of Pfizer’s COVID vaccine on Jan. 18, and has been unable to work and care for her family since. Dobbs has seen 16 different medical providers and tried 22 different medications to address more than 20 different symptoms — none of which she had prior to getting vaccinated.

Although NIH officials acknowledged in communications to Dobbs they were aware of neurological injuries being reported in people after receiving COVID vaccines, they have not published the data they’ve collected to the scientific community as promised, so that people like Dobbs can find effective treatments.

Dobbs said she and others who developed neurological injuries after a COVID vaccine shared their experiences with a reporter in hope of raising awareness. But the story never ran because, according to the reporter, a “higher up” at Pfizer pressured the news agency to drop it.

Pfizer submits data for 5- to 11-year-olds to FDA

Pfizer and BioNTech on Tuesday submitted initial trial data for their COVID vaccine in children ages 5 to 11, and said they would make a formal request to U.S. regulators for emergency use in the coming weeks — though they had previously targeted submitting the application as early as the end of September.

If Pfizer does not finish its application until mid-October, the FDA may not make its decision until sometime between Halloween and Thanksgiving, according to a source familiar with the matter.

The Pfizer-BioNTech vaccine was rapidly authorized for the 12-15 age group roughly a month after the companies filed for authorization. If the same timeline is followed for this application younger children could start receiving their shots as soon as late October, Reuters reported.

Professional tennis player Jeremy Chardy — formerly ranked 25th in the world — said his 2021 season is over thanks to a “series of problems” he experienced after getting a COVID vaccine between the Olympics and U.S. open.

Chardy, 34, said since receiving his vaccine he suddenly couldn’t train or play, and needs more time to care for himself to ensure he doesn’t have health problems returning to the court too soon.

Chardy told AFP he was suffering from movement-limiting pain — which caused violent pains all over his body as soon as he made any physical effort. Chardy said he regrets taking the vaccine, but he couldn’t have known.

A few high-profile NBA players who are part of the remaining 10% of players who have not received a COVID vaccine are making headlines as they defend their position not to get vaccinated.

Pro tennis player Jeremy Chardy says his 2021 season is over thanks to a “series of problems” he experienced after getting Pfizer’s vaccine. Orlando Magic’s @JJudahIsaac stands firm on why (including he had COVID) he’s not getting vaccine.https://t.co/ZuuLyWIzZP

On Monday, at Orlando Magic Media Day, Jonathan Isaac, who has already had COVID, answered questions about his decision not to get the vaccine — a decision that potentially could lead to missing games based on the NBA’s protocols in various cities.

Isaac said he is not anti-vax, anti-science or anti-medicine, but he is uncomfortable with taking the vaccine at this time, and it is his belief that every person should have the right to make their own choice about whether or not to get the vaccine — without bullying, being pressured or forced to do so.

Bradley Beal, a guard for the Washington Wizards, and Andrew Wiggins, a forward for the Golden State Warriors, said they also had not received COVID vaccines.

Beals, who has already had COVID, cited personal reasons for his refusal but questioned reporters on breakthrough cases, natural immunity and the vaccine’s inability to prevent COVID. Wiggins said his decision not to get vaccinated is a private matter.

A Broadway performance of Disney’s “Aladdin” was canceled Wednesday due to COVID breakthrough cases within the company, producers said — just one night after the show had resumed for the first time since the pandemic shut-down.

All of New York’s 41 Broadway theaters require eligible audiences, crews, performers and other staff to be vaccinated against COVID, according to the Broadway League’s policy.

Harvard Business School is pivoting back to remote learning as the first semester of 2021 begins, due to a “steady rise” in breakthrough COVID cases. Harvard University said on its website 95% of students and 96% of employees are vaccinated.

Several states are reporting a rise in breakthrough cases, including Massachusetts — which  reported 4,378 new COVID cases in fully vaccinated individuals between Sept. 18 and Sept. 25 — Oregon, which  said 23% of new cases ending Sept. 18 occurred in the fully vaccinated and Indiana, which reported more than 33,851 breakthrough cases since vaccines were authorized for emergency use in Dec. 14, 2020.

Data from the Centers for Disease Control and Prevention (CDC) show as of Sept. 20, 19,136 patients were hospitalized or died despite being fully vaccinated — a number the agency acknowledges is an undercount of all SARS-CoV-2 infections among fully vaccinated persons.