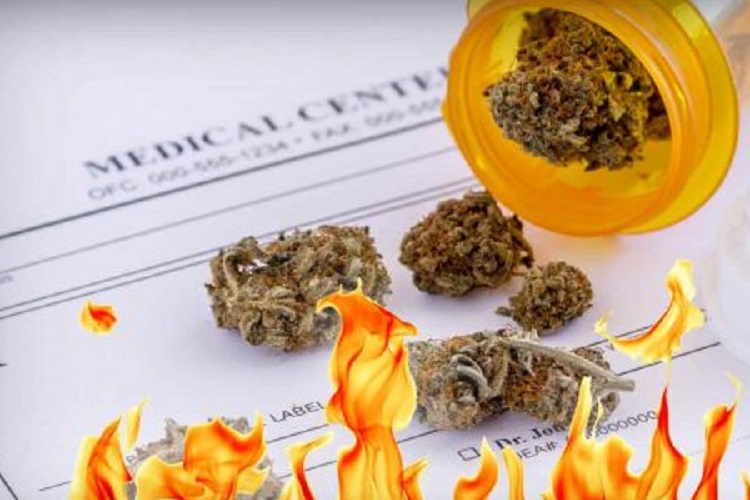 There has been a proverbial sh*t storm brewing online this week and last as President Donald Trump receives both praise and hatred for his tweets over the Roger Stone sentencing. Trump has repeatedly bashed the jury forewoman publicly over the past week since Stone was sentenced to over three years in prison for obstructing a congressional investigation. As many folks argued over the Stone debacle, behind the scenes, the Trump admin has been taking on medical marijuana — and not in a good way.

Despite what president Trump says to certain crowds on the campaign trail, his actions in office speak far louder than empty promises on the road. Trump has never openly supported marijuana legalization though he said he had no objection to US states legalizing forms of marijuana. When it came time to act, however, he did the opposite.

According to a recent report from the Sun Sentinel, the Trump Administration has proposed removing medical marijuana protections in the 2021 fiscal budget and leaked audio revealed the President’s belief that smoking weed makes you dumb.

What’s more, Marc Lotter, a top Trump campaign spokesperson who serves as director of strategic communications for Trump’s 2020 campaign, was asked about the President’s stance on changing federal cannabis laws, and minced no words when he said the devil’s lettuce has no place in the legal market.

“I think the president is looking at this from a standpoint of a parent—a parent of a young person—to make sure we keep our kids away from drugs,” Lotter said. “They need to be kept illegal. That is the federal policy.”

These remarks are in complete contrast to former statements made by the president on the campaign trail in 2016. Perhaps prison and pharmaceutical lobby dollars flowing into the GOP may be now steering Trump’s decisions.

According to a recent report from NORML:

Trump proposed ending an existing policy that protects state medical marijuana programs from Justice Department interference in addition to a provision that would continue to prohibit the District of Columbia from regulating the sale of marijuana for adult use. This is the opposite of what he said during his first campaign. With WWJ Newsradio 950 in Michigan on March 8, 2016, Trump said “I think it certainly has to be a state — I have not smoked it — it’s got to be a state decision …  I do like it, you know, from a medical standpoint … it does do pretty good things. But from the other standpoint, I think that it should be up to the states.”