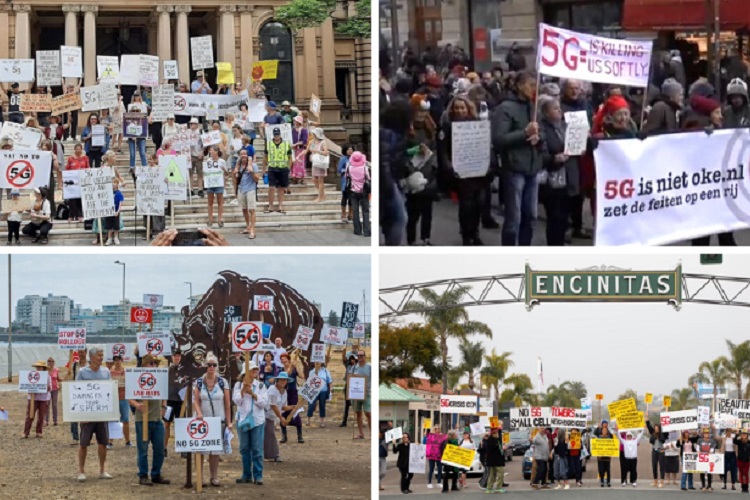 The January 25 Global Protest Day to Stop 5G was a success as activists from hundreds of cities around the world came together at marches, rallies, workshops, and documentary screenings to educate the public about their concerns regarding 5G—or 5th generation cellular technology.

The stated goal of the event was to “stop the deployment of millions of 5G antennas on Earth and 50,000 5G satellites in space, and to secure emergency high-level meetings with officials in governments and international governmental organizations including the European Union, the United Nations, and the World Health Organization.”

In the days leading up to the Global Day of Protest activists delivered copies of the International Appeal to Stop 5G on Earth and in Space to local governments in hopes of raising awareness about the concerns surrounding the technology. The 5G Space Appeal is a statement signed by a reported 191,733 signatories from 203 nations and territories. The Appeal states:

“We the undersigned scientists, doctors, environmental organizations and citizens, urgently call for a halt to the deployment of the 5G (fifth generation) wireless network, including 5G from space satellites. 5G will massively increase exposure to radio frequency (RF) radiation on top of the 2G, 3G and 4G networks for telecommunications already in place. RF radiation has been proven harmful for humans and the environment. The deployment of 5G constitutes an experiment on humanity and the environment that is defined as a crime under international law.“

After the success of the first global protest, organizers with Stop 5G International are now calling for a second Global Protest Day to Stop 5G scheduled for April 25.

The roll out of 5G technology is proving to be the most controversial generation yet as a growing number of people across the planet demand answers concerning the safety of the emerging technology.  As the Mind Unleashed has previously reported, cities and localities are raising alarm bells due to the federal government and their partners in Big Wireless usurping local control of 5G expansion.

This battle between localities and the federal government and their Big Wireless buddies has resulted in several lawsuits. One of these lawsuits will go before the U.S. Court of Appeals for the Ninth Circuit February 10. The court’s ruling will decide whether the Federal Communications Commission can restrict how much local governments can charge wireless providers to attach small cells to light poles and other city-owned infrastructure.

Stay tuned to the Mind Unleashed for updates on this continuing battle over the 5G roll out.