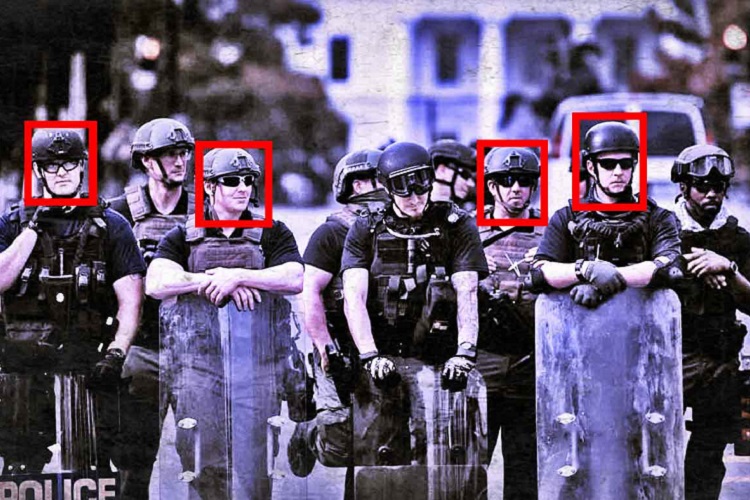 “Beat them at their own game.” “Flip the script.” “Give them a taste of their own medicine.” Any of these phrases will apply to the absolutely ingenious measures taken by  activists who are creating their own facial recognition systems to identify cops who hide their badges.

As TFTP reported during the George Floyd protests, across the country, in dozens of cities, cops were doling out unprecedented violence in the face of angry protests stemming from unchecked police brutality. Though Floyd’s death was the flash point of the unrest, the uprising represented something far deeper — systemic abuse by law enforcement of minorities, the poor, and everyone else not directly connected to the establishment. Countless incidents throughout this unrest involved officers who could not be identified and as a result of their anonymous instigation and violence, there has been no accountability.

In multiple states, police have been seemingly taking measures to avoid this accountability by removing their name tags or covering their badges. This is in direct violation of most departments’ policies. But no politicians, mayors, governors, or mainstream media seem to care.

Cops hiding their identification is ominous for two reasons. The first reason being that they can enact brutality against the innocent and we do not know who they are to hold them accountable. The second reason is the fact that anyone can dress up like a cop with no badge number and start doing whatever they want, up to and including inciting violence, detaining people, or any other numerous unscrupulous acts.

As we reported at the time, many of these departments appeared to have been given orders from the top down to cover their badge numbers and remove their name plates. This is not acceptable and thanks to a self-taught programmer, Christopher Howell, it no longer has to be.

Howell created a program that identifies cops who were permitted by their supervisors to cover their names while responding to protests.

“I am involved with developing facial recognition to in fact use on Portland police officers, since they are not identifying themselves to the public,” Howell told the NY Times.

Because Portland made it illegal to use facial recognition against the police, Howell had some barriers to using his software. However, as the NY Times reports, Portland’s mayor, Ted Wheeler, told Mr. Howell that his project was “a little creepy,” but a lawyer for the city clarified that the bills would not apply to individuals. The Council then passed the legislation in a unanimous vote.

“There’s a lot of excessive force here in Portland,” Howell told the NY Times. “Knowing who the officers are seems like a baseline.”

This self-taught computer programmer has since created a system that has led to flipping the script on police accountability.

“This was, you know, kind of a ‘shower thought’ moment for me, and just kind of an intersection of what I know how to do and what my current interests are,” he said. “Accountability is important. We need to know who is doing what, so we can deal with it.”

Howell is not alone in his pursuit of identifying anonymous cops who can dole out violence without fear of retribution.

Colin Cheung, a protester in Hong Kong, had developed a tool to identify police officers using online photos of them. His technology was so effective that the Chinese government arrested him for it.

As the Times reports, Paolo Cirio published photos of 4,000 faces of French police officers online for an exhibit called “Capture,” which he described as the first step in developing a facial recognition app. He collected the faces from 1,000 photos he had gathered from the internet and from photographers who attended protests in France.

Other folks are getting on board as well. If the state is willing use facial recognition on innocent citizens, they shouldn’t be surprised with the cameras and software begin pointing back at them.

**This article (Activists Build Their Own Facial Recognition System To ID Bad Cops Who Hide Badges) was originally published at The Free Thought Project and is re-posted here with permission.**