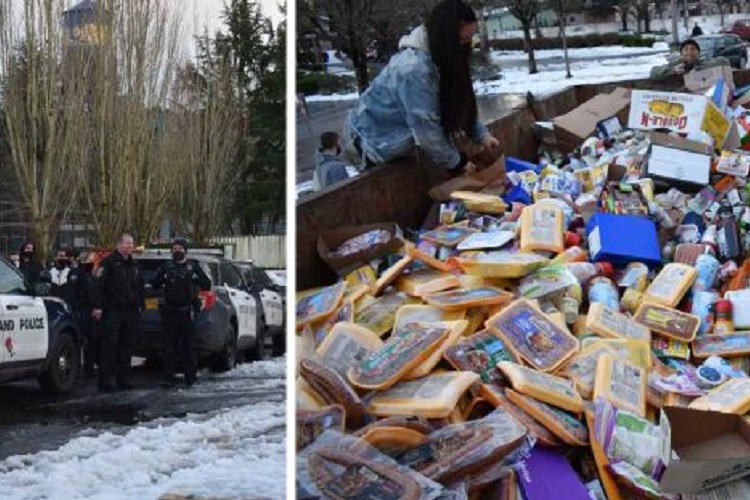 Portland, OR — The state of Oregon has one of the largest homeless populations in the country. Its largest city, Portland is home to the 4th largest houseless population in the entire United States. Having such a large homeless population means that there are a lot of hungry folks in the city. So, when the local Fred Meyer throws the entire store’s perishables in the trash because they lost power, it garners the attention of the hungry, as well as those who wish to feed the hungry.

As the following case illustrates, it also garnered the attention of a dozen cops who collected their taxpayer funded salaries to guard the dumpster and make sure the food never made its way to this homeless population.

According to reports, the Fred Meyer story on Hollywood in Portland lost power on Tuesday and threw away  thousands of food items they say were no longer safe for consumption due to the temperatures the items had reached.

The decision was made “out of an abundance of caution,” according to a Fred Meyer spokesperson. To be clear, the food was not expired and was actually preserved outside due to the cold temperatures and many people were more than willing to take it regardless of the warning from Fred Meyer.

When someone spotted the food, they posted it on social media and individuals, hungry and helpful alike, descended on the Fred Meyer dumpster.

go snag some free food if you can get to the Hollywood Fred Meyer in Portland yall pic.twitter.com/Fv86mvNWrB

On Tuesday afternoon, the group of people around the dumpster collecting the food were quickly met by police officers.

According to police, an employee called “because they felt the situation was escalating and feared there may be a physical confrontation.”

A Fred Meyer spokesperson sent the following statement in regard to the incident:

“We appreciate people speaking out against hunger. We get it, throwing away food is never a good thing. Unfortunately, some perishable food that requires refrigeration at our Hollywood store was out of temperature for a protracted period of time. This was due to a weather-related power outage and it is not safe for consumption. Out of an abundance of caution, we are disposing of the product to keep people safe. We engaged law enforcement, as the safety of our associates and customers is always our top priority.

But these folks were hungry and were willing to get food from a dumpster. They know the risks, why not let them have it? People dumpster dive for expired food all the time and no one stops them. This time, however, police stepped in to stop it.

“After that, other people started showing up and asking them, ‘Why are you guys guarding a dumpster?’” local resident Morgan Mckniff said to Oregon Live.

People took to Twitter to criticize the response by police, noting that they often take a very long time to respond to calls if they show up at all, but when it was people trying to feed themselves, they showed up in full force.

The times we've called 911 in PDX before, nobody has come. Maybe next time I'll tell them my garbage is being raided. https://t.co/IjdZBN6tlz

Mckniff said many of the people police threatened with arrest and turned away are regular customers of the store, according to Oregon Live.

“I live in this neighborhood. This neighborhood doesn’t have power,” Mckniff said. “And Fred Meyer is telling people in this immediate community who shop here that they can’t have these things they’re throwing away. Cheese, pickles, yogurt — things that are intentionally cultured and cured.”

“Here it’s not broken windows, it’s tossed away but otherwise completely fine food,” that person said. “It’s not a bad situation or vandalism, it’s literally the exact opposite — feeding hungry people. Yet they still use the same apparatus to prevent anything from being done.”

Luckily, the police eventually left after realizing that there was no legitimate threat to person or property. The people returned and were able to get the food without incident, illustrating the unnecessary show of force in the first place.

**This article (A Dozen Cops Dispatched To Protect A Dumpster Full Of Food From Hungry People) was originally published at The Free Thought Project and is re-posted here with permission.**