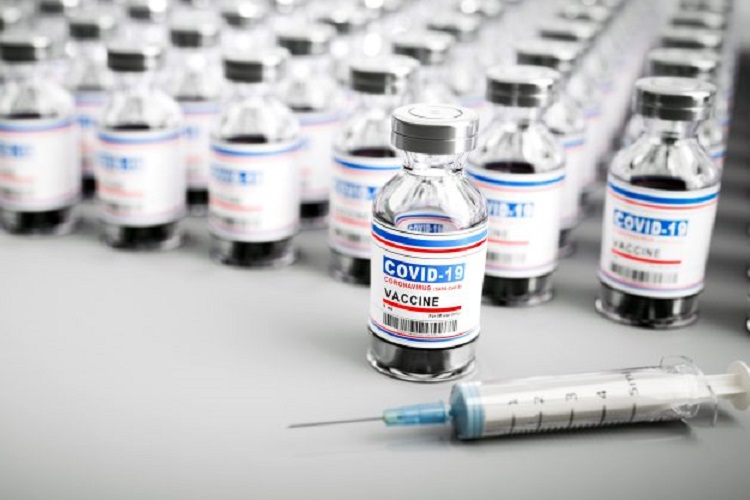 Data released Friday by the Centers for Disease Control and Prevention (CDC) showed that between Dec. 14, 2020 and Aug. 27, 2021, a total of 650,077 total adverse events were reported to VAERS, including 13,911 deaths — an increase of 284 over the number of deaths reported the previous week.

There were 85,971 reports of serious injuries, including deaths, during the same time period — up 1,505 compared with the previous week. 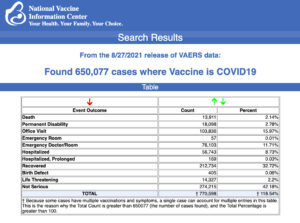 The most recent reported deaths include a 15-year-old boy (VAERS I.D. 1498080) who previously had COVID, was diagnosed with cardiomyopathy in May 2021 and died four days after receiving his second dose of Pfizer’s vaccine on June 18, when he collapsed on the soccer field and went into ventricular tachycardia; and a 13-year-old girl (VAERS I.D. 1505250) who died after suffering a heart condition after receiving her first dose of Pfizer.

As The Defender reported Sept. 1, two of the FDA’s top vaccine officials announced they will leave the agency this fall, raising questions about the Biden administration and the way it sidelined the agency.

Gruber and Krause were upset about the Biden administration’s recent announcement that adults should get a COVID booster eight months after they received a second shot, people familiar with the decision told The New York Times.

Neither believed there was enough data to justify offering booster shots yet, the sources said, and both viewed the announcement, amplified by Biden, as pressure on the FDA to quickly authorize them.

U.S. health regulators also said there isn’t enough data to recommend boosters for the general population, yet the White House has moved forward with its plan to offer a third dose of Pfizer or Moderna by the week of  Sept. 20 — even though that plan requires authorization from the FDA and CDC first.

The FDA announced its Vaccines and Related Biological Products Advisory Committee will hold a virtual advisory meeting Sept. 17, to discuss Pfizer-BioNTech’s COVID application for boosters — just days before the shots are to become available to the general population.

The committee’s director, Dr. Peter Marks, said “a transparent, thorough and objective review of the data by the FDA is critical so that the medical community and the public continue to have confidence in the safety and effectiveness of COVID-19 vaccines.”

The FDA plans to livestream the meeting on the agency’s YouTube channel. The meeting also will be webcast from the FDA website.

Moments before the FDA released the announcement, Moderna said it had submitted an application to offer booster doses of its COVID vaccine, CNN reported.

According to CDC data, 955,000 Americans have already received additional vaccine doses, though it’s unclear how many of those were technically authorized.

An advisory panel to the CDC last week unanimously endorsed the FDA’s full approval of the Pfizer and BioNTech COVID vaccine for people 16 years and older, and the CDC immediately adopted the committee’s recommendation.

The endorsement by the CDC’s Advisory Committee on Immunization Practices came after the FDA on Aug. 23 granted full approval to Pfizer’s “mRNA vaccine, which is being marketed as Comirnaty.

The CDC statement made no mention of the Comirnaty brand, but referred to Pfizer-BioNTech’s “licensed” vaccine — even though the FDA approval was limited specifically to the drugmaker’s Comirnaty vaccine.

Britain’s vaccine advisers said they would not recommend vaccination of healthy 12- to 15-year-olds against COVID, preferring a precautionary approach due to the potential for vaccinated teens to develop heart inflammation, Reuters reported.

The Joint Committee on Vaccination and Immunisation also said children were at such a low risk from the virus that vaccines would offer only a marginal benefit.

The British government said it would consult medical advisers to look at other factors before making a final decision. The UK’s four chief medical officers have been asked to consider the wider impact on schools and society.

The Joint Committee on Vaccination and Immunisation did advise widening the existing vaccine program to include an extra 200,000 teenagers with specific underlying conditions, including chronic heart, lung and liver conditions that put those teens at much higher risk of COVID than healthy children.

As of Aug. 7, there were 106 incidents of myocarditis and pericarditis in people under the age of 25 in Ontario — slightly more than half of the total of all such incidents. Thirty-one cases occurred in the 12- to 17-year age group and 75 cases in 18- to 24-year-olds. Eighty percent of all cases were in males.

According to the report, the rate of heart inflammation was higher following the second dose of an mRNA vaccine, particularly for those receiving the Moderna vaccine as the second dose of the series, regardless of the product used for the first dose.

Public Health Ontario added the reporting rate for heart inflammation in those 18 to 24 was seven times higher with Moderna than with Pfizer. Pfizer is currently the only vaccine authorized for use in 12- to 17-year-olds in Ontario.

The study, published Aug. 25 on medRxiv, is the largest observational study to date and used data from Israel –– one of the most highly vaccinated countries in the world.

Researchers examined medical records of 673,676 Israelis 16 years and older — charting their infections, symptoms and hospitalizations between June 1 and Aug. 14, when the Delta variant predominated in Israel.

Researchers also found a significantly increased risk of asymptomatic disease in those who had been vaccinated.

Cheryl Cohen (VAERS ID 1535217), a healthy 64-year-old woman from Florida, died three months after her second dose of Pfizer’s COVID vaccine from sudden-onset Creutzfeldt-Jakob Disease (CJD), a rare, degenerative and fatal brain disorder she developed soon after she was vaccinated.

In an exclusive interview with The Defender, Gianni Cohen said her mother experienced her first episode indicating something was neurologically wrong with her 11 days after her second Pfizer dose. Her initial symptoms included severe headaches, mass confusion and brain fog.

After being hospitalized for 10 days, Cohen returned home where her symptoms progressed and her condition rapidly deteriorated. On June 19, Cohen was hospitalized again for a severe headache, after which she was diagnosed with CJD. She died July 22.

Cohen’s medical team said the onset of CJD could be tied to the COVID vaccine. Dr. Andrea Folds, one of the internal medicine physicians from Aventura Hospital who oversaw Cohen’s case, wrote a case report. The report, submitted Sept. 2 to American College of Physicians Journal, is awaiting approval for publication.

The World Health Organization (WHO) is monitoring a new COVID variant called “mu,” which the agency says has mutations that have the potential to evade immunity provided by a previous COVID infection or vaccination, CNBC reported.

Mu — known by scientists as B.1.621 — was added to the WHO’s list of variants “of interest” on Aug. 30, the international health organization said in its weekly COVID epidemiological report published late Tuesday.

The variant contains genetic mutations that indicate natural immunity, current vaccines or monoclonal antibody treatments may not work as well against it as they do against the original ancestral virus, the WHO said.

The mu strain needs further study to confirm whether it will prove to be more contagious, more deadly, or more resistant to current vaccines and treatments.

Despite multiple phone and email communications with many people at the CDC, and despite being told that our request was in the system and that someone would respond, we have not yet received answers to any of the questions we submitted. It has been 183 days since we sent our first email to the CDC requesting information.