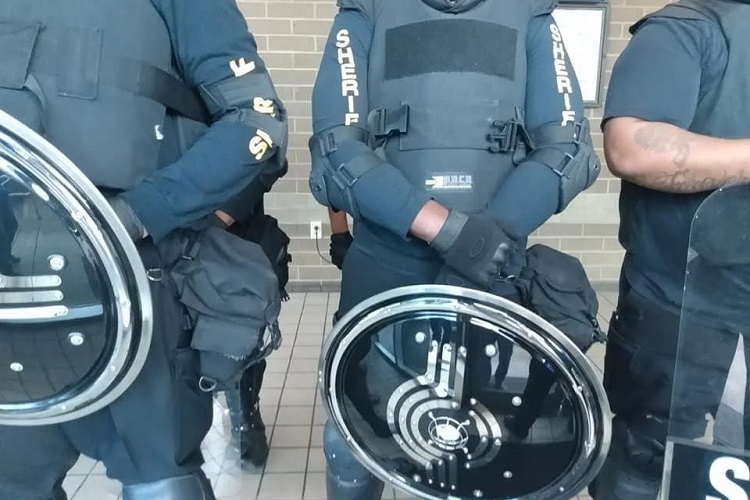 The Shelby County Sheriff’s office in Tennesee has come under fire after deploying taser shields to protests that sprang up in response to the lack of charges against the officers who killed Breonna Taylor. After the strange shields were noticed by a group of protesters who gathered in front of the Criminal Justice Center, and images of the shields went viral online, Shelby County Sheriff Floyd Bonner was forced to apologize for the deployment of the shields, calling it a “regrettable mistake.”

In a statement, the sheriff’s office said that Bonner has “directed policy modifications that will prohibit those shields from being displayed or used outside of the Jail again.”

According to WREG, the sheriff’s office recently upgraded to the newest e-shields in July 2020 but has had other “less lethal shock shields” since a jail riot in the 1990s. The shields reportedly cost $895 each.

Police often use shields as weapons during protests. Just this week, an LA County Sheriff’s deputy was seen on film repeatedly striking a protester with a riot shield. Luckily, in that case, it was just a normal riot shield and not a taser shield, but one could imagine how much more dangerous these encounters could be if these devices were commonly deployed by police departments across the country. Luckily, there were no reports of the taser shields being used on any of the protesters in Tennessee.

Hunter Demster, one of the activists that saw the officers wielding the shields suggested that they were being used to intimidate the protesters.

“They are scary looking and once again I think that’s the point, to chill our 1st Amendment-protected rights,” Demster told Fox13 Memphis.

“How often are these shields being used, how often have you had them? There a lot of questions around them that the public deserves to have answers to,” he added.

A statement from the sheriff’s office insisted that the shields carry less than lethal voltage, and made a strange comparison with the voltage of a Christmas tree light, which could obviously still do some serious damage.

Even low voltage shocks have been known to affect people differently, especially those with any type of underlying health conditions. These weapons are often tested on members of the military who are in optimum health, so a force that is less than lethal for them might certainly be lethal for someone who has underlying health conditions or someone who is at a different level of fitness.

“The new shield is capable of delivering a pulsating shock of 210-320 volts for a fraction of a second. This shock appears to be lower than a 4.8 watt Christmas tree light and far less than tasers which can be 50,000 volts at discharge. The temporary electrical shock delivered by eshield is non-injurious and does not enter the body,” a portion of the statement read.

The sheriff promises that these devices won’t be deployed in a public setting like this again, but they will still be used in prisons, especially if there is some type of uprising or rioting among the inmates.