Fight Rages On To Save Centuries-Old Giant Philippine Rosewood Tree 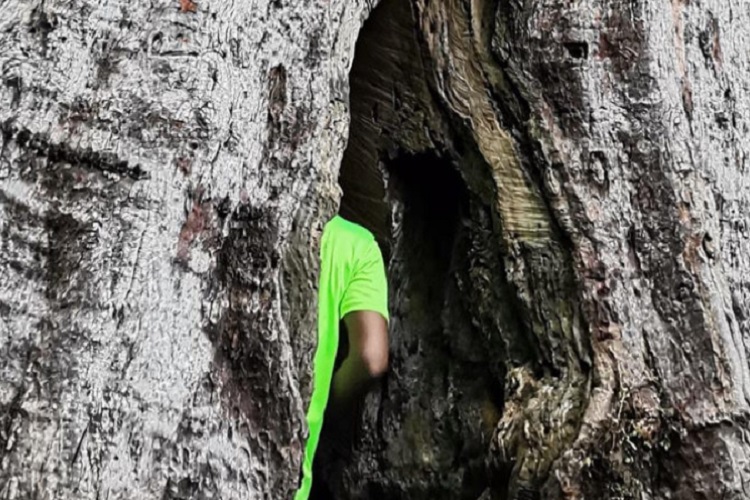 MINDANAO, Philippines — For centuries, a giant Philippine rosewood tree has stood as an iconic landmark along a stretch of the Pan-Philippine Highway that runs outside the rustic southern town of San Francisco.

Known locally as toog, and formally as Petersianthus quadrialatus, this particular specimen is believed to be 300 years old, dating back to the Spanish colonization of the Philippines. It survived a strong typhoon in 1942 here in the village of Alegria in what is today the province of Agusan del Sur, on the southern island of Mindanao, and is considered the oldest and tallest tree of its species: it stands at 56 meters (184 feet), the height of a 13-story building, and its diameter close to the base is nearly 4 meters, or 12 feet, or about the length of the average car.

It holds significant cultural value and has become an iconic representative of a species that is losing ground in the Philippines. Threatened by illegal logging and kaingin, the traditional practice of slash-and-burn agriculture, the toog is included in the IUCN Red List of Threatened Species due to habitat loss and unsustainable harvest. Its sturdy ruby-tinged wood is prized for making furniture and musical instruments, among others.

While it has survived the test of time and the fury of nature — from floods to typhoons to earthquakes — the Alegria toog tree could soon become a thing of the past: it’s threatened with a slow death after officials decided to cut its upper half. Without its crown, where the leaves thrive, the tree would be deprived of food, which would eventually kill it.

The decision to slash the height of the Alegria toog came after experts confirmed that it’s infested with fungi and termites. Having been left unchecked and untreated over time, the problem has led from a small cavity in the trunk to a hole large enough for a person to enter.

In April 2019, Marcelina Pacho, a pathologist and tree surgeon who assessed the health of the Alegria toog, noted that a basal cavity measuring 1.5 meters (5 feet) wide and 3 meters (10 feet) high had formed at its base.

“The presence of few mycelia, the vegetative part of fungus, and the fungal odor are indicators or signs of wood decay,” said Pacho, who was formerly associated with the Department of Environment and Natural Resources’ (DENR) Ecosystems Research and Development Bureau (ERDB). “Rotting wood can be crumbled as well as the presence of moisture further indicated that the decay is in the advance and active phase.”

Pacho didn’t recommend that the tree be cut down; instead, she suggested a course of fungicide treatment and the extraction of the decaying wood, which could then be filled in with concrete mix reinforced with gravel, cinder block and rebar.

The agency reached a different conclusion, recommending the cutting down of the tree due to the high risk it posed to residents, commuters and surrounding properties. (It stands 9 meters, or about 30 feet, from the highway.) In its findings released in July last year, the FWRDEC said the trunk structure was continuously deteriorating due to mycelial infection and only two of its eight major buttresses were holding it steady.

“The mechanical and structural strength and stability of the toog tree has already been compromised,” said Conrado Marquez, the FWRDEC head.

The decision to cut down the Alegria toog triggered an outcry from local residents, conservationists and tree lovers across the country. It’s considered sacred by the Indigenous Manobo tribe, who believe it houses the spirits of their ancestors. Over time, it has also become a major tourism draw for the town of San Francisco.

In September 2019, the iconic tree was saved from being cut down after officials yielded to public appeals to allow treatment for the decaying tree.

But almost a year later, the local government said it hadn’t seen any improvement in the toog’s health and scheduled it to be cut down, for a second time, on Aug. 7. Again, the decision sparked protests that forced officials to suspend the activity and call for a stakeholders’ dialogue.

By Aug. 10, officials headed by Solomon Rufila, the mayor of San Francisco, and members of the municipal council, following the stakeholders’ consultative meeting, changed tack. Instead of cutting down the tree entirely, they decided to reduce its height by cutting off the top half, including its leaf canopy.

Leaves produce food for their host plant through photosynthesis, so scalping the crown of the Alegria toog is a sure death sentence, albeit a slow and painful one, according to scientists and officials. Amando Palijon, a renowned tree surgeon and former forestry professor at the University of the Philippines Los Baños (UPLB), said the tree would gradually die if the upper portion is cut, according to a report by news portal MindaNews.

“If you notice the tree is devoid of lateral branches from the base to the general crown level which is normal architecture of the tree,” Palijon said. “This means that this will not assure the tree will produce sprouts that will develop into branches that will subsequently form the crown that is needed to make it function physiologically.”

Lawrence Tinampay, a spokesman for the San Francisco municipal government, told Mongabay that officials had decided to trim the tree — the actual amount to be cut is still unknown — so the public can still see the legacy tree (or at least its trunk) at its exact location as part of a municipal landmark.

He agreed with the assessment that because the leaves of the tree, all on the topmost portion, would be cut off, the tree would eventually die.

“The toog tree will be cut off to a considerable height that it will no longer pose a danger to the lives of residents and commuters, and their properties,” Tinampay said. He denied allegations the government had been negligent about conserving the tree. The “time has come to choose between safety and heritage, and with the decision to cut it to a considerable height, local officials have achieved both ends,” he said.

Jurgenne Primavera, a renowned marine scientist and native of Agusan, blamed officials for their failure to curb the deterioration of the tree, which the municipal council recognized as a “protected tree” through a 2012 ordinance. “It’s a result of poor governance,” she told Mongabay.

Primavera, a pioneering member of Philippine Native Tree Enthusiasts, a social media group with some 14,000 members, said that up until the 1990s, there was still a wide swath of vegetation surrounding the tree. In 2005, the community had begun to encroach on the area as people cleared away the vegetation to build their houses, she added.

Leonilo Tandog Jr., the San Francisco disaster risk reduction officer, said there are proposals to retrofit the tree with a support structure that will not only prevent it from falling over but will also double as viewing decks to keep the tourists coming to San Francisco. The town offers views of Mount Magdiwata and Agusan Marsh Wildlife Sanctuary, a protected area spanning 15,000 hectares (37,000 acres) of complex freshwater marshes and watercourses with numerous shallow lakes and ponds.

The local consortium Save the TOog tree Please (STOP), headed by  Mauro Bravo Jr., urged the government not to cut the Alegria toog and instead allow the recommended scientific treatment to save it. The group called for a third-party scientific reassessment of the state of the health of the Alegria toog.

Primavera said she believes the tree can still be rehabilitated, citing the case of a bitaog tree (Calophyllum inophyllum) in the town of Magallanes, in neighboring Agusan del Norte province. Declared a Philippine centennial tree in 1998, the bitaog’s two big branches broke down due to fungal rot in June 2017.

Through a regimen of tree surgery, fungicide treatment and regular checkups, the bitaog tree is still alive today. Primavera said officials in San Francisco should do the same for the Alegria toog. “The toog tree can be saved, no need to cut it,” she said, adding it’s also important to conduct further studies to improve its physical and structural stability.

Officials have not yet set a date for cutting the tree “to a safe height,” pending further instruction from the DENR. For now, the STOP local consortium and Filipino tree conservationists say they’re committed to keeping the flame of protest glowing to save the centuries-old Alegria toog from being destroyed.