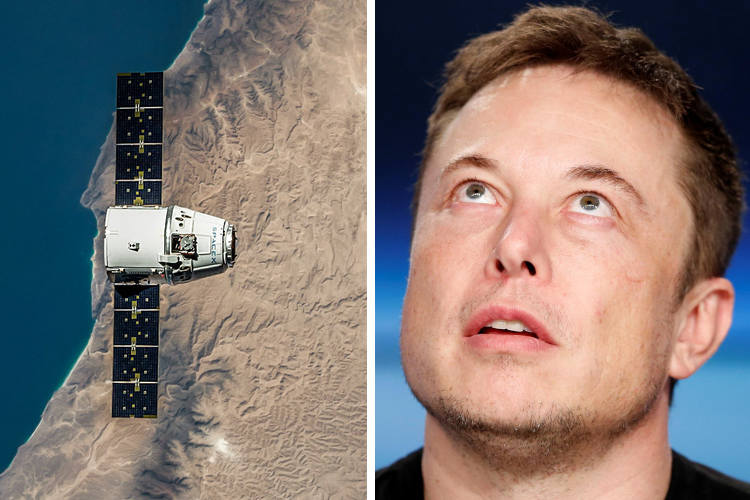 Keeping us preoccupied with a phony virus which was supposed to kill millions and landed-up causing no more deaths than the normal winter flu, sure was a useful way of directing attention away from the earthly and upward deployment of the 5G microwave weapon.

While billions were under home arrest in semi suffocation from airless apartments, ridiculous masks and insane social distancing, Mr. Elon Musk, megalomaniac extraordinaire, had hired Cape Canaveral and was enjoying his own private launch pad parties in celebration of his ‘Space X’ company blasting hundreds of 5G satellites into the ionosphere fifty miles above the Earth.

Multi billionaire Elon Musk likes to believe that smothering every last inch of the planet in a blanket of beamed toxic electromagnetic pulsed ‘arrays’, is exactly what we have all been praying for.

Mr. Musk claims to be the ‘inventor’ of the electric car – the forthcoming models of which just happen to need no drivers but lots of electricity – 5G electricity to be precise. Autonomous cars steered by 5G microwave beams with transmitters situated along every major road and street in the world.

Musk’s great ‘vision of the future’ is to marry his obscene wealth to the most advanced artificial intelligence technologies for the ultimate enslavement of humanity. He wears his vision just like obsessed Covid believers wear their obscene masks. Just like that other multi billionaire Bill Gates wears his vaccination death wish.

Multi millionaires have a way of smiling as they explain their dystopian visions of suffocated life on Earth. Their sad minds can only see the perfect algorithmic march of a super cyborg AI civilisation stretching out in front of them ad infinitum.

So when Mr. Musk, adored guru of ardent technophiles, tells us how his twenty thousand satellites are going to spray our planet with a perfect wall of 5G weaponised electromagnetic laser beams from satellites put into orbit in the delicate protective atmosphere of the ionosphere – we are supposed to fall on our knees and cry “Thank you, Mr Musk! We always believed a saviour would come at this time and rescue us from what remains of our deeply upsetting urge to live.”

Elon Musk and fellow 5G satellite corporation owners and believers, have been ‘on the money’ almost from the day they were born. But once on the roller coaster of what constitutes ultimate ‘success’, their ambition – rather than being slated – simply wants more of the same. And when it gets that, it then wants an even more grandiose expression of its unquenchable desire for godliness.

Arthur Fairstenberg explains in his most recent circular ‘Putting the Earth in a High Speed Computer’ “The threat to life comes from the fact that all these satellites are located in the ionosphere. The ionosphere is a source of high voltage that controls the global electric circuit, which in turn provides the energy of life.” He explains further, “Every living thing is part of this circuit. It provides us with energy for life and information that organises our bodies. If you pollute this circuit with billions of digital pulsations, you will destroy all life.”

Those who feel powerless to put an end to the reign of megalomaniacs who set out to destroy our common home with complete impunity, must now cease to accept this as a reason to do nothing other than wallow in their own sense of tragedy. Man and nature are one. A tragedy in one is a tragedy in both.

There are initiatives we can and must take that will play their part in putting an end to this nightmare and they should start immediately by using the law courts in order to directly challenge the global purveyors of destruction.

Further actions of an indirect nature can be equally valuable. In this particular case, abandoning your cell phone is the number one action to be undertaken by individuals honest enough to act on what they know to be necessary. Like everything else in the world of commerce, ceasing to buy-in to the offending product, destroys the industry that produces it.

A steady decline in the market for the latest cell phone will do more than anything else to prevent the domination of near space by weapons of mass radiation destruction. asphyxiating

All aspects of modulated WiFi radiation emitted by the EM towers and smart grids asphyxiating human and planetary life today must, for the sake of the species, be put an end to without delay.

If we are to come through this period of unprecedented top-down technophobic deception and manipulation, we will only do so because we saw fit to challenge its manifestations face to face, at every opportunity possible.

Giving-up one’s latest toxic toy must be first on the list of contributions to preventing the outright destruction of the great cyclical electrical circuit which supports all life on Earth.

“There is no more important task on Earth right now – not climate change, not deforestation, not plastics in the ocean, and not stopping 5G on the ground. None of that will matter if Space X is allowed to go forward with Starlink.”