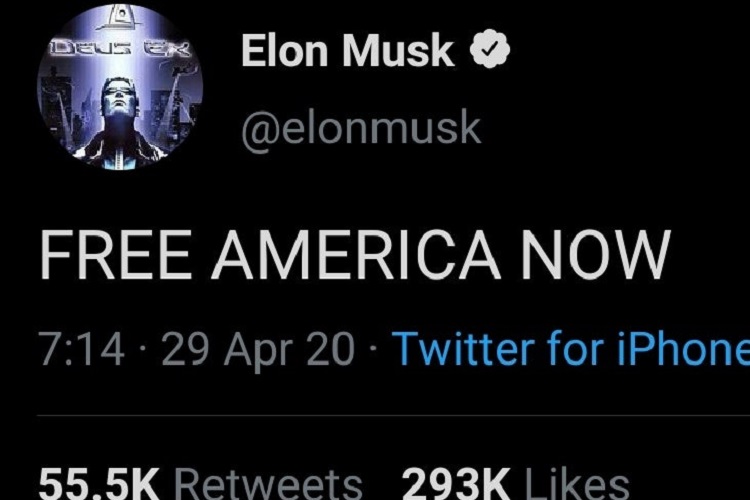 Elon Musk has been getting a lot of attention in the past few weeks for his social media posts about the coronavirus pandemic. In the past week, his posts on Twitter have become especially interesting. In addition to rants about re-opening the country, Musk has also made strange posts about the stock price for his company, Tesla, being too high, and even claimed that he was prepared to sell all of his possessions. After the posts were made, the stock price for Tesla dropped significantly.

I am selling almost all physical possessions. Will own no house.

Many of his supporters felt that he was just joking about selling his possessions or being weird on social media as he often is, but it appears that Musk has begun selling off some of his high-value assets in the days after making the post. According to CNBC, Musk put two of his Los Angeles mansions up for sale after the posts were made.

Many of his supporters also realized that he changed his Twitter profile picture to an image from the video game, Deus Ex, which takes place in a future where wealthy corporations and politicians conspire to use an engineered illness, called “The Gray Death” to control society and enrich themselves in the process.

In the game, the cure for the illness was being withheld from the poor, and kept only for the rich. It appeared that he may have been comparing himself to the game’s protagonist, JC Denton, but some commenters argued that he was more like the game’s billionaire villain, Bob Page. Others have argued that Musk was not comparing himself to either character, but just subtly pointing out the potential similarities to the current global situation.

Musk has since changed his profile picture, but is now making headlines again, this time over pictures of his newborn child, which he claims is named “X Æ A-12.” To make matters even more interesting, when Musk and his girlfriend Grimes posted photos of the baby, they used a Snapchat filter to make it appear that the child had face tattoos.

We really need to see picture of the baby !! Please do share.