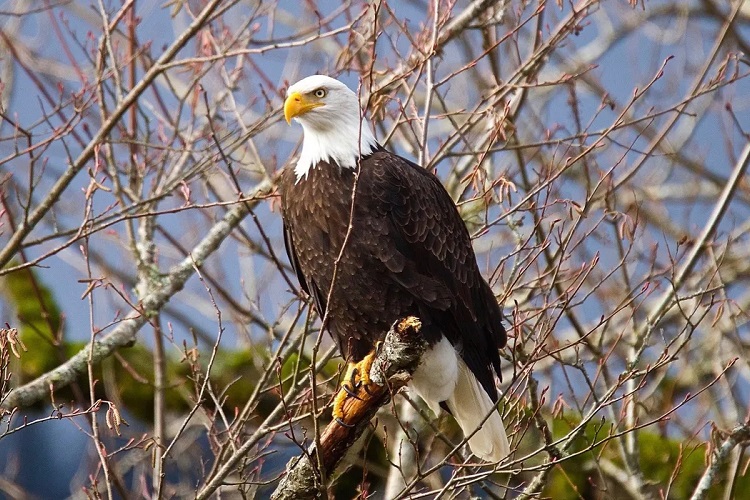 America’s national bird is threatened by hunters. Not that hunters are taking aim at the iconic bald eagle, but bald eagles are dying after eating lead bullets, as CNN reported.

The Cape Fear Raptor Center, North Carolina’s largest eagle rehab facility, has recently treated seven eagles for lead poisoning, executive director Dr. Joni Shimp told CNN. The center also said that 80 percent of the eagles it has had to euthanize since November were because of lead poisoning.

Similarly, officials from the Hatteras Island Wildlife Rehabilitation in North Carolina said that 70 to 80 percent of the eagles they treat have high levels of lead in their system, and the effects are devastating, according to WTKR in North Carolina and coastal Virginia.

“The bird is lethargic, it’s limp, it may have vision problems, staggering, legs not working correctly,” explained Lou Browning of Hatteras Island Wildlife Rehabilitation to WTKR.

As CNN explained, hunters use lead bullets to kill deer and other animals. When the eagles feast upon the dead animals, they are indirectly exposed to toxic levels of lead.

“Hunters in no way, shape or form intentionally try to kill an eagle, vulture or any other species,” Shimp said to CNN. “If the deer isn’t killed immediately and runs and the hunter can’t find the deer, the eagles and vultures find it and ingest the lead.”

Shimp also explained some of the neurological problems that result from lead exposure to eagles. She told CNN that the eagles will show a “lack of judgment when flying across roadways, the inability to take flight quickly resulting in being hit by cars, seizures and death.”

The bullets hunters use often scatter into tiny fragments that travel through an animal’s body.

“It’s often said a piece of lead the size of a grain of rice is enough to take down an eagle,” Doug Hitchcox, a naturalist from Maine Audubon, said. Maine had five cases of eagles dying from lead poisoning in January alone, according to NECN in New England.

Hunters and bird advocates agree that changes in ammunition would go a long way to solving the problem. That small change makes a big impact for eagles. “The most direct thing would be to switch to copper bullets instead of lead,” Browning said to WTKR.

Similarly, David Trahan, the executive director of the Sportsman’s Alliance of Maine said that education and outreach are essential to prevent the problem, according to to NECN. He also advocates using copper bullets, especially for big animals like moose where pieces of meat are often left behind.

“If you’re going to kill an animal and leave it in the woods like that, let’s use a copper bullet,” Trahan said to NECN. He added, “I know of no hunter who wants to hunt an animal and knowingly kill a bald eagle.”

Trahan also felt that outreach could protect people as well, since lead is toxic to us as well.

“If I give meat to kids, to family, I want to make sure I’m not providing something to them that could be harmful,” he explained to NECN, suggesting that lead bullets be used in training and at gun ranges, where it won’t come into contact with wildlife.

According to the American Bird Conservancy, millions of birds every year die from lead poisoning, as CNN reported.

“It’s an overall US problem. The lead poisoning increases during deer season but we see it all year,” Shimp said to CNN. “Some times it’s chronic low-grade exposure over time that also brings them down.”

She too suggests that large stores should sell copper bullets.

“We need to target the big chain stores and get them to carry copper bullets,” Shimp said to CNN. “Then I can set up education days at these stores, with a vulture, red tail (hawk) or eagle and show the hunters and point them to the copper ammo. Then we can start to win this war … the war on lead, not on hunters.”