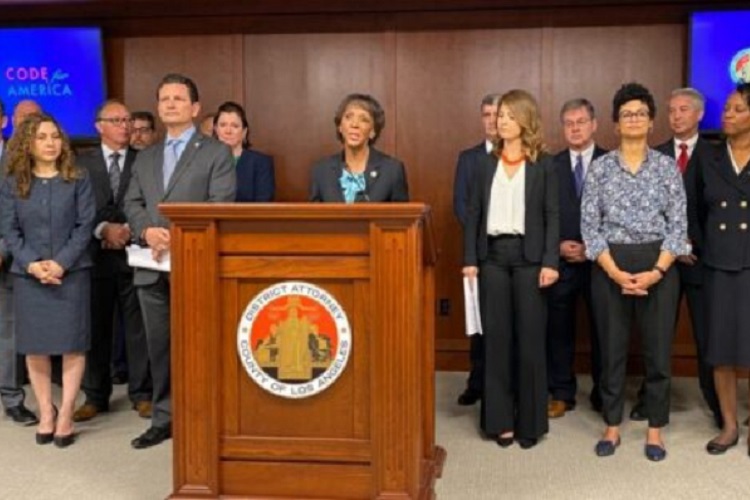 Los Angeles District Attorney Jackie Lacey announced that she had secured the automated dismissal of 66,000 marijuana convictions in Los Angeles County alone. In total, the State Attorney’s office announced that there have now been 85,000 cases expunged in all of California.

According to the LA Times, Lacey filed the motion asking a judge to erase 62,000 felony convictions dating back to 1961 and 4,000 misdemeanor convictions in a total of 10 cities across the county on Thursday. Los Angeles County Superior Court Judge Sam Ohta signed off on the order Tuesday.

That means 22,000 civilians will no longer carry felonies on their records in California and 15,000 no longer have a criminal record at all. Of the 53,000 people who received the relief, 32% are black, 45% are Latino, and 20% are white according to the Associated Press.

In 2016, Proposition 64 legalized the purchase and possession of small amounts of cannabis and allowed people to grow as many as six plants for personal use. And then in 2018, state legislation ordered California prosecutors to review past marijuana cases eligible for dismissal under Proposition 64 and decide whether to challenge any claims by July of this year, NPR reported.

The expungement effort was a part of a partnership with Code For America, a nonprofit organization that developed a computer algorithm to quickly analyze county data to determine which cases were eligible to be cleared. Code For America was involved with the effort last year to expunge the records of 9,000 San Francisco residents for marijuana offenses.

Code For America’s Clear My Record technology is free to all 58 California district attorneys and has helped reduce or dismiss more than 85,000 Proposition 64 eligible convictions across five counties the State Attorney’s office said, according to USA Today.

“On average it takes 15 minutes for an attorney to review just one record,” said Evonne Silva, senior program director for Code for America. “The fact that we can review thousands of records in minutes really unlocks the potential for this to apply to other marijuana legalization efforts in other states.”

Lacey stated that her office even exceeded what the law requires and further fully dismissed felony convictions for cultivating, possession, transporting, or selling marijuana for people who are over 50 or under 21. However, there were stipulations that those convicted couldn’t have had a felony conviction in the last 10 years or have completed probation for cannabis convictions.

According to PEW Research in 2017, the states eligible for scrubbing former marijuana convictions were Colorado, Maryland, New Hampshire, and Oregon.

Democratic Presidential candidate Bernie Sanders has expressed that if he is elected all past marijuana convictions would be expunged.

“Sanders administration we will review all marijuana convictions – both federal and state – for expungement and re-sentencing. All past convictions will be expunged,” the Sanders campaign wrote.

Cannabis remains illegal at the federal level, but 11 states including Alaska, California, Colorado, Illinois, Massachusetts, Maine, Michigan, Nevada, Oregon, Vermont, Washington, and the District of Columbia have laws on the books legalizing marijuana for recreational use. Ten states also allow for the regulated sale of the plant. Nearly 90 percent of American adults support marijuana legalization, according to a recent poll.

In 2020, legalization efforts appear to be more likely with an additional 19 states, that want to push for legalization.

Los Angeles pardoning 66,000 is a big step in the right direction in allowing non-violent offenders who are a victim of the war on drugs to rebuild their lives. So far California, Illinois, and New York have passed laws that demand officials to clear the records of their citizens while a total of 12 states have enacted laws that allow residents to manually seek the erasure of low-level cannabis convictions a much more lengthy process.