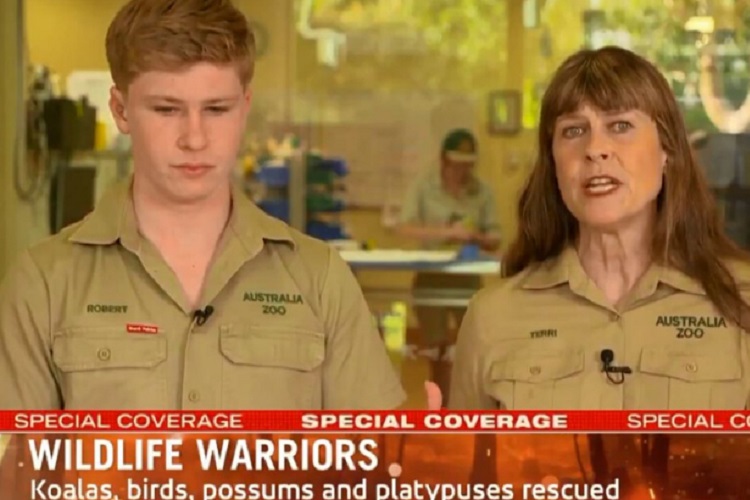 As Australia continues to burn in an unprecedented bushfire crisis, the horrifying toll on wildlife is having a heavy impact on animal-lovers and conservationists.

Last week, University of Sydney ecologists expressed fears that nearly half a billion animals—including 8,000 koalas—have been killed since the fires broke out in September. Over the weekend, an estimated 25,000 additional koalas burned to death when the fire extended to Kangaroo Island, potentially wiping out entire rare and endangered species.

Amid the tragedy, the family of the late “Crocodile Hunter” Steve Irwin—who passed away in 2006 while filming an ocean documentary—has been working around the clock helping treat a record-breaking influx of animal patients at the Australia Zoo Wildlife Hospital.

On Sunday, Steve Irwin’s 16-year son Robert showed clear signs of distress as he told Sunrise about the emotional toll of the crisis. He said:

“It’s definitely an ongoing issue and we’re just trying to do our best to help in any way we can.

Terri Irwin chats about the devastating impact of Australia's bushfires on our vulnerable koala population.

His mother Terri then explained why the fires have decimated the country’s beloved koala population, in particular. She said:

“The consideration with koalas is that their instinct is to go up, safety is in the top of the tree, and with a hot fire, eucalyptus trees have so much oil in their leaves they actually ignite and explode. So being able to treat koalas is few and far between because they’re basically incinerated, which is absolutely heartbreaking.

But now is the time we need to look at more than just setting aside habitat. Koalas are classed as vulnerable and I think that after this event we need to really sit down and look at classing them as endangered and protecting our icons, our kangaroos, our koalas.”

Continuing, Robert detailed the various ways in which animals have been harmed by the fires. He said:

Obviously smoke inhalation and burns are happening frequently, but also animals are going into areas where they’re not supposed to be to escape the horrific conditions.”

This means they’re getting hit by cars and are being attacked by domestic animals, so there’s a horrific knock on effect.”

The family of “wildlife warriors” has officially treated over 90,000 animal patients since the crisis broke out, according to 21-year-old Bindi Irwin. The animals include birds, koalas, possums, platypus, and other rare creatures unique to the Australian continent.

“With so many devastating fires within Australia, my heart breaks for the people and wildlife who have lost so much. I wanted to let you know that we are SAFE. There are no fires near us @AustraliaZoo or our conservation properties. Our Wildlife Hospital is busier than ever though, having officially treated over 90,000 patients.

My parents dedicated our Australia Zoo Wildlife Hospital to my beautiful grandmother. We will continue to honour her by being Wildlife Warriors and saving as many lives as we can.”

Our @AustraliaZoo Wildlife Hospital takes in animals from all over Australia. Hundreds of grey-headed flying foxes, a species listed as vulnerable, have been flown to Queensland after the rescue centre they were recovering in was at risk from fire and evacuated. Some of the orphans are now being cared for by the team at the hospital until they’re big enough to go home, and there’s no threat of fire. 🦇 In September, flying fox admissions to the hospital skyrocketed by over 750% due to drought conditions and lack of food. Flying foxes are now being drastically affected by wildfires and we’re again seeing an influx of these beautiful animals from across the country. This week, we treated our 90,000th patient. To cope with so many animals being admitted to the hospital, in 2019 we opened a sea turtle rehabilitation centre, sea snake ward and are about to complete a new bird recovery area, but it’s still not enough to keep up. We need to build a new ward for our patients. Wildlife Warriors from around the world are asking how they can help us save native wildlife, you can donate on our website www.wildlifewarriors.org , or support our fundraiser to start construction of our newest ward by visiting the link in my bio! 💚