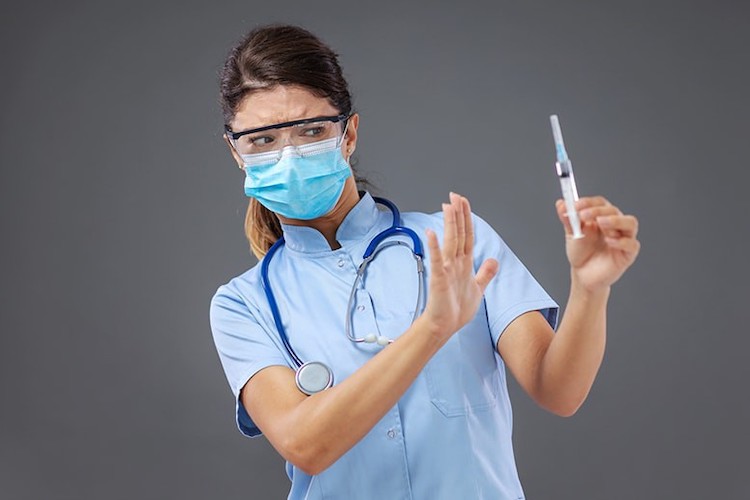 The Association of American Physicians and Surgeons – AAPS – is a non-partisan professional association of physicians in all types of practices and specialties across the country and has been around since 1943. They are rarely cited by the establishment, however, as their mission is to preserve medical freedom, not take it away.

Unlike organizations like the American Academy of Pediatrics, which is funded by Pfizer, Johnson & Johnson, GlaxoSmithKline, and other notably corrupt pharmaceutical companies, the AAPS is completely funded by membership dues and contributions. So, according to the AAPS, they “answer to and advocate for our physician members and not big corporate donors or government funding sources.”

Last month, the AAPS conducted a survey among physicians which returned some rather controversial findings. According to the internet survey, nearly 60 percent of physicians said they were not “fully vaccinated” against COVID.

The AAPS points out that this contrasts with the claim by the American Medical Association that 96 percent of practicing physicians are fully vaccinated. The survey sample for the AAPS was 700 physicians while the AMA’s survey sample was only 300.

The AAPS makes sure to note that neither survey “represents a random sample of all American physicians, but the AAPS survey shows that physician support for the mass injection campaign is far from unanimous.”

“It is wrong to call a person who declines a shot an ‘anti-vaxxer,’” stated AAPS executive director Jane Orient, M.D. “Virtually no physicians are ‘anti-antibiotics’ or ‘anti-surgery,’ whereas all are opposed to treatments that they think are unnecessary, more likely to harm than to benefit an individual patient, or inadequately tested.”

When giving reasons for declining the vaccine, a whopping 54 percent of respondents said they were aware of patients suffering a “significant adverse reaction.” Of the unvaccinated physicians, 80 percent said “I believe risk of shots exceeds risk of disease,” and 30% said “I already had COVID.”

Other reasons for declining the shot, according to the survey, included unknown long-term effects, use of aborted fetal tissue, “it’s experimental,” availability of effective early treatment, and reports of deaths and blood clots.

“Causality is not proven. However, many of these episodes might have resulted in a huge product liability or malpractice award if they had occurred after a new drug,” stated Dr. Orient. “Purveyors of these COVID products are protected against lawsuits.”

And she is right. You can actually prove that you or your child were harmed from a vaccine yet the vaccine maker is completely shielded from liability. Even if you are awarded monetary compensation through the NVICP, the taxpayers are put on the line, not the vaccine makers.

What’s more, as TFTP reported in May, over a hundred doctors and nurses who work in the Houston Methodist hospital network filed a lawsuit against the company, arguing that they don’t want to be forced to take the “experimental” vaccine.

A total of 117 plaintiffs are insisting that the hospital is “illegally requiring its employees to be injected with an experimental vaccine.” The hospital is forcing the staff to be “human ‘guinea pigs’ as a condition for continued employment,” the lawsuit stated.

Unfortunately for the group, their lawsuit was thrown out.

In December, many frontline healthcare workers openly stated that they were wary of the vaccine, citing the experimental nature of the shot.

According to a press release, AFLDS is asking to immediately stop administration of experimental COVID vaccines in anyone 18 and younger, all those who have recovered from COVID and acquired natural immunity, and every other American who has not received informed consent as defined by federal law.

The 67-page motion requests the judge issue a preliminary injunction pursuant to § 360bbb–3(b)(1)(C) for the following reasons: