You Will Eat Two Recycling Bins of Plastic in Your Lifetime 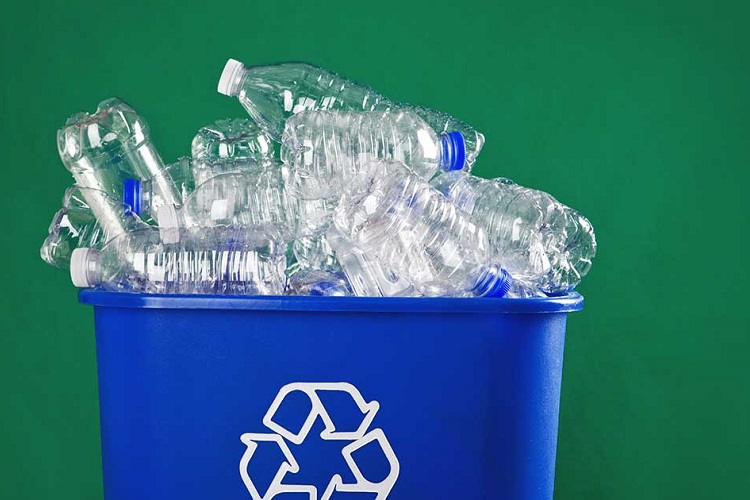 Tiny bits of plastic about the size of a sesame seed or smaller are everywhere. News headlines often show intact plastic bags, rings and bottles as the primary threats to the environment — and these are indeed harmful to marine life and more — but the smaller, more insidious plastic bits may be even more harmful.

These microplastics, as they’re known, are smaller than 5 millimeters (mm), and found in a number of commonly consumed foods and beverages.

In a study at University of Newcastle, Australia, researchers for WWF International, they quantified what this means for humans, revealing a shocking finding that the average person could be eating about 5 grams of plastic per week — about the amount found in one credit card. Reuters then extrapolated on the findings, revealing what 5 grams of plastic per week adds up to over a lifetime.

Drinking Water Is the Largest Source of Plastic Ingestion

The University of Newcastle study analyzed the “existing but limited” literature available on the average amount of plastic ingested by humans. The calculations were based on 33 studies on the consumption of plastic via foods and beverages, such as drinking water, beer, shellfish and salt. Per week, the researchers estimated that the average person consumes:

It’s thought the plastic pollution in bottled water originates from the manufacturing process of the bottles and caps. When researchers at the State University of New York tested 259 bottles of 11 popular bottled water brands — including Aquafina, Nestle Pure Life, Evian, Dasani and San Pelligerino — they found, on average, 325 pieces of microplastic per liter.

Shellfish represent another notable source of plastic exposure, contributing up to 0.5 grams a week. Part of the reason for their large contribution is because they’re eaten whole, digestive system and all, after living in oceans polluted by plastic.

Inhalation of plastic particles from the air was found to contribute only a negligible amount of humans’ lifetime plastic burden, although the researchers noted that this could vary largely depending on local conditions and lifestyle.

They did note, however, that indoor air contains more plastic pollution than outdoor air, due to more limited air circulation and the fact that household dust and synthetic textiles are significant sources of microplastics in indoor air.

Further, while humans are exposed to more microplastics via food and beverages than air at this time, microplastics are known to be airborne and have been found in remote locations you wouldn’t expect, including the top of the Pyrénées mountains in southern France and “in the northernmost and easternmost areas of the Greenland and Barents seas.”

The size and shape of the plastics (small and weathered) found suggested they had come not from local areas, but had traveled great distances. Calling the northeast Atlantic section of the Arctic Ocean a “dead end” for the plastic debris, researchers hypothesized that the seafloor below would be a catch-all for accumulating plastic debris.

In separate research, it was also revealed that plastic pollution has reached the Southern Ocean surrounding Antarctica.

You May Eat Two Recycling Bins of Plastic in Your Lifetime

It’s likely that you’re consuming plastic daily and, as mentioned, Reuters used the disturbing statistic that people are likely consuming 5 grams of plastic per week to illustrate just how much plastic you may be ingesting over time. Five grams of plastic, the news outlet noted, is about the same weight as a plastic bottle cap or enough plastic bits to fill a porcelain soup spoon. Further, in time this amounts to:

Thava Palanisami of the University of Newcastle, who was involved in the featured study, told Reuters:

“We have been using plastic for decades but we still don’t really understand the impact of micro- and nano-sized plastic particles on our health … All we know is that we are ingesting it and that it has the potential to cause toxicity. That is definitely a cause for concern.”

What Are the Health Risks of Ingesting Plastic?

The long-term effects of plastic ingestion are unknown, but there’s reason to be concerned. Microplastics for textile fibers, for instance, make up 16% of the world’s plastic production. It’s been suggested that inhaled plastic textile fibers could persist in the lungs, leading to inflammation.

Such plastics also contain contaminants, such as polycyclic hydrocarbons (PAHs), which may be genotoxic (i.e., causing DNA damage that could lead to cancer), along with dyes, plasticizers and other additives linked to additional toxic effects, including reproductive toxicity, carcinogenicity and mutagenicity. As noted by the University of Newcastle report:

“In marine animals, higher concentrations of microplastics in their digestive and respiratory system can lead to early death. Research studies have demonstrated toxicity in vitro to lung cells, the liver, and brain cells.

Some types of plastic carry chemicals and additives with potential effects on human health. Identified health risks are due to production process residues, additives, dyes and pigments found in plastic, some of which have been shown to have an influence on sexual function, fertility and increased occurrence of mutations and cancers.

Airborne microplastics may also carry pollutants from the surrounding environment. In urban environments, they may carry PAHs — molecules found in coal and tar — and metals.”

It’s difficult to link human health problems back to microplastics, especially considering the heavy toxic burden most are exposed to daily, but many of the chemicals used in the manufacture of plastics are also known to disrupt embryonic development, dysregulate hormones and gene expression, and cause organ damage. They have also been linked to obesity, heart disease and cancer.

As Pete Myers, Ph.D., founder and chief scientist of the nonprofit Environmental Health Sciences and an adjunct professor of chemistry at Carnegie Mellon University, told Consumer Reports, “There cannot be no effect.”

More Nurdles Than Ever

What are nurdles? As explained by Kim Preshoff in the TED-Ed video above, a key plastic pollutant you may never have heard of is nurdles — tiny plastic pellets that form the raw material for plastic products of all kinds. Ranging in size from microscopic grains to millimeter-sized pellets, nurdles are now found in lakes, rivers and oceans across the globe.

The small pellets easily escape during production, transport, processing and waste management procedures, such that an estimated 5 billion to 53 billion plastic pellets are lost by British production companies annually.

It takes about 600 nurdles, which resemble plastic lentil beans, to make one disposable water bottle, and these tiny plastic pieces are similar in size and shape to fish eggs, making them appealing snacks to marine animals. This is another way that microplastics are deadly, as consuming microplastics is known to inhibit appetite in marine animals.

Further, nurdles, like other plastics, are efficient at absorbing toxins from waterways and can concentrate them to extreme levels. They’re so ubiquitous that nurdles are said to be “the second-largest direct source of microplastic pollution to the ocean by weight.”

And, once in the environment, nurdles and other plastics are unable to biodegrade, allowing them to persist and accumulate in the environment for generations to come. As journalism organization Orb Media and researchers at the State University of New York at Fredonia explained:

“Being composed largely, if not entirely, of hydrocarbon chains, the lack of double bonds or other functional groups provides an inherent stability to its molecules, and its synthetic nature means that the vast majority of microorganisms haven’t evolved to utilize plastic as a food source.

Thus while plastic will break into smaller and smaller particles via photo-oxidative mechanisms, the fundamental molecule structures of the material change very little throughout that process.

Plastics become microplastics become nanoplastics, but they are all plastics, just of increasingly smaller size, allowing them to be more easily ingested and perhaps even cross the gastrointestinal tract to be transported throughout a living organism.”

A Call to End Plastic Pollution

WWF is calling on governments worldwide to support further research into how plastic and microplastics enter living organisms as well as their consequences on health. They also suggest establishing national targets for plastic reduction, recycling and management, along with an international treaty to stop plastic pollution in the oceans.

“The current global approach to addressing the plastic crisis is failing. Governments play a key role to ensure all actors in the plastic system are held accountable for the true cost of plastic pollution to nature and people,” WWF noted, adding:

“Systemic solutions using strategic and tactical interventions are required to stop plastic pollution at its source, and bold action from a broad range of stakeholders is needed across the full plastic lifecycle to implement these interventions.”

That being said, don’t underestimate the impact one person — you — can have by making simple tweaks to your daily life. By avoiding the use of single-use plastics like straws, utensils, bags and bottles, and seeking to purchase products that are not made from or packaged in plastic, you can make a dent in the amount of plastic waste and pollution being produced.