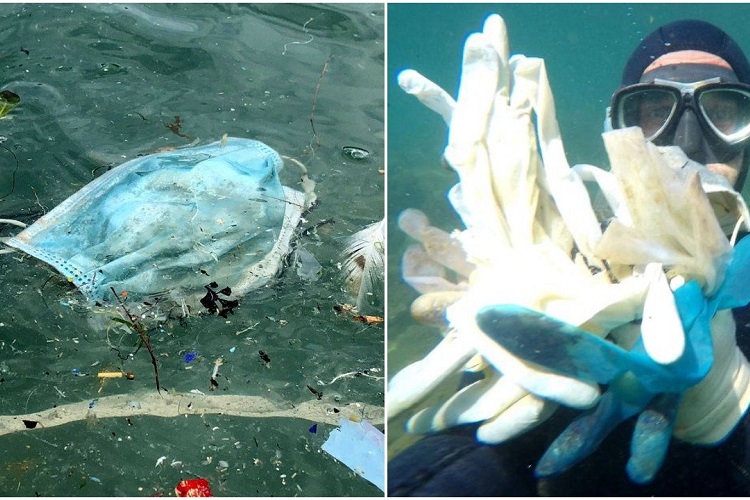 When the COVID-19 pandemic swept across the world earlier this year, plunging much of the world into lockdown conditions, it seemed that nature was finally being given a major breather – so much so that breathless stories spread across the world about animals taking back their environs, along with memes and social media posts about how “the earth is healing.”

However, the scant silver lining of the global lockdown was much thinner than believed, and instead, the pandemic has given rise to a new, sad side effect – millions of pieces of discarded personal protective equipment (PPE) that is littering the planet in shocking ways.

According to a new study published in the Environment, Science & Technology journal, no less than 129 billion face masks and 65 billion gloves – 194 billion units of PPE in total – are being used on a monthly basis around the world, resulting in “widespread environmental contamination” and a catastrophic new wave of waste material in our oceans and rivers.

Although wearing PPE is often essential, remember to take care when throwing away used items. Not only are they hazardous to other people, it's all too easy for discarded masks and gloves to end up in watercourses.
Find a bin, do it properly.#Loveyourriver #PPE #coronavirus pic.twitter.com/QWCXSuWtNp

To make matters worse, watchdogs with WWF (World Wildlife Fund) warned in a report earlier this year: “If only 1 percent of the masks were to be disposed of incorrectly and dispersed in nature, this would result in up to 10 million masks per month polluting the environment.”

An environmentalist in the UK is already seeing the results of the improper disposal of the mountain of PPE being used and discarded on every month.

Emily Stevenson, a marine biologist widely known as the “Beach Guardian,” recently went to collect litter from a beach in Cornwall, along England’s southwestern coast, and found no less than 171 pieces of discarded PPE only in the span of one hour – a shocking rise from the six PPE items she had found on a previous beach cleanup.

171 discarded face masks and gloves found on Cornish coastline in one hour pic.twitter.com/mUqUvvMHZP

Emily and her father Rob founded The Beach Guardian project in 2017, and have organized 200 community cleanups involving 6,000 volunteers. In recent months, she has noticed how the litter they are collecting has shifted from single-use plastic bags and straws to gloves and protective face masks.

“We’ve already found evidence of PPE actually sinking below the ocean surface,” Stevenson said, according to The Independent. “This means that there could be a totally unaccounted for concentration of PPE pollution on the seafloor, which can remain as dormant debris for centuries.”

“Once on the seafloor, it smothers any biological structures such as important Sea Fan beds in the UK, or coral reefs further afield,” she continued. “Also, this debris entails a ‘plasticizing’ effect when on the seafloor – potentially inhibiting gas exchange between the water column and sediment.”

Stevenson noted that if the entire UK wears one disposable protective face mask per day for a full year, this would result in an extra 57,000 tons of plastic that is difficult to recycle – along with an additional 66,000 tons of contaminated PPE trash.

“This has been the first time I have been legitimately frightened by PPE pollution,” Stevenson said. “To see it in the water, in the environment that holds my heart and my passion. To see it at home, on my doorstep. It hit me very hard.”

🌊 This wave of #PPEPollution is relentless… but can be resolved, if we are all responsible with our waste.#PlasticPandemic pic.twitter.com/1sAprnmZ3q

Well prior to the outbreak of the novel coronavirus pandemic, experts and conservationists were urgently warning that plastic waste was inundating the world’s oceans and water supplies, leaching carcinogenic toxins and chemicals into the marine environment, with plastic drink containers trapping and confining—and ultimately killing—marine wildlife.

The pollution has reached such monstrous proportions that an estimated 100 million tons of plastic could be found in the oceans, according to the UN. Between 80 and 90 percent of it comes from land-based sources. A report prepared for the 2016 World Economic Forum in Davos, Switzerland, warned that by 2050, plastic waste in the ocean would outweigh all fish.

Stevenson retains hope that given the unifying effect of the pandemic, people will be more open to embracing a conscientious attitude toward problems on a global scale.

“The saving grace of COVID-19 has been our unity; the whole world has faced the virus together,” she noted. “If we continue with the same global collaboration, we can resolve this. PPE is in all of our lives; we use it or see it every day. But it is for this very reason that we can all do something about it.”

“It is those daily, individual, small steps that happen on a global scale that is going to be our greatest ally in this fight against plastic,” Stevenson said.