Who Profits from Militarizing the Police? 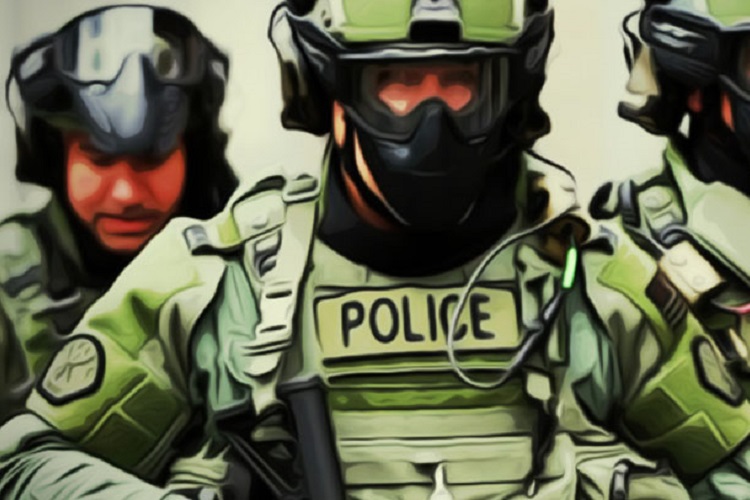 Ever since images of the police deploying armored vehicles against peaceful demonstrators in Ferguson, Missouri, hit the national airwaves in 2014, the Pentagon’s program for supplying “surplus” military equipment to local police departments has been a news item. It’s also gotten intermittent attention in Congress and the executive branch.

Since 1997, the Pentagon’s 1033 Program, as it’s called, has channeled to 8,000 separate law enforcement agencies more than $7.4 billion in surplus equipment, including Mine-Resistant Ambush Protected (MRAP) vehicles of the kind used on the battlefields of Iraq and Afghanistan, along with rifles, ammunition, grenade launchers, and night vision devices. As Brian Barrett has pointed out at Wired, “Local law enforcement responding to even nonviolent protests has often looked more like the U.S. Armed Forces.” Political scientist Ryan Welch coauthored a 2017 study suggesting, when it came to police departments equipped in such a fashion, “that officers with military hardware and mindsets will resort to violence more often and more quickly.”

Under the circumstances and given who’s providing the equipment, you won’t be surprised to learn that the 1033 Program also suffers from lax oversight. In 2017, the Government Accountability Office (GAO) created a fake law enforcement agency and was able to acquire $1.2 million worth of equipment through the program, including night vision goggles and simulated M-16A2 rifles. The request was approved within a week of the GAO’s application.

The Obama administration finally implemented some reforms in the wake of Ferguson, banning the transfer of tracked vehicles, grenade launchers, and weaponized aircraft, among other things, while requiring police departments to supply more detailed rationales describing their need for specific equipment. But such modest efforts—and they proved modest indeed—were promptly chucked out when Donald Trump took office. And the Trump administration changes quickly had a discernible effect. In 2019, the 1033 Program had one of its biggest years ever, with about 15,750 military items transferred to law enforcement, a figure exceeded only in 2012, in the Obama years, when 17,000 such items were distributed.

As noted, the mere possession of military equipment has been shown to stoke the ever stronger “warrior culture” that now characterizes so many police departments, as evidenced by the use of Special Weapons and Tactics (SWAT) teams armed with military weaponry for routine drug enforcement activities. It’s hardly just SWAT teams, though. The weaponry and related items provided under the 1033 Program are widely employed by ordinary police forces. NBC News, for instance, reported that armored vehicles were used at least 29 times in response to Black Lives Matter protests organized since the murder of George Floyd, including in major urban areas like Philadelphia and Cincinnati. NBC has also determined that more than 1,100 Mine-Resistant Ambush Protected vehicles have been distributed to local law enforcement agencies under the MRAP program, going to communities large and small, including Sanford, Maine, population 20,000, and Moundsville, West Virginia, population 8,400.

A report from the American Civil Liberties Union (ACLU) has similarly documented the use of Pentagon-supplied equipment in no-knock home invasions, including driving up to people’s houses in just such armored vehicles to launch the raids. The ACLU concluded that “the militarization of American policing is evident in the training that police officers receive, which encourages them to adopt a ‘warrior’ mentality and think of the people they are supposed to serve as enemies, as well as in the equipment they use, such as battering rams, flashbang grenades, and APCs [Armored Personnel Carriers].”

Companies in the military-industrial complex earn billions of dollars selling weapons, as well as building and operating prisons and detention facilities, and supplying the police while theoretically dealing with problems with deep social and economic roots. Generally speaking, by the time they’re done, those problems have only become deeper and more rooted. Take, for example, giant weapons contractors like Lockheed Martin, Boeing, and Raytheon that profit so splendidly from the sales of weapons systems to Saudi Arabia, weaponry that in turn has been used to kill tens of thousands of civilians in Yemen, destroy civilian infrastructure there, and block the provision of desperately needed humanitarian assistance. The result: more than a hundred thousand deaths in that country and millions more on the brink of famine and disease, including COVID-19.

Such major weapons firms have also been at the front of the line when it comes to benefiting from America’s endless post-9/11 wars. The Costs of War Project at Brown University estimates that the United States has spent over $6.4 trillion on just some of those overseas conflicts since 2001. Hundreds of billions of those dollars ended up in the pockets of defense contractors, while problems in the US, left far less well funded, only grew.

And by the way, the Pentagon’s regular budget, combined with direct spending on wars, also manages to provide huge benefits to such weapons makers. Almost half of the department’s $750 billion budget goes to them. According to the Federal Procurement Data System’s latest report on the top recipients of government contracts, the five largest US arms makers alone—Lockheed Martin, Boeing, Raytheon, Northrop Grumman, and General Dynamics—split well over $100 billion in Pentagon awards among them in 2019. Meanwhile, those same five firms pay their CEOs a total of approximately $100 million per year, with hundreds of millions more going to other top executives and board members.

Meanwhile, in the Trump years, the militarization of the border has become a particularly lucrative business opportunity, with General Atomics, for instance, supplying ever more surveillance drones and General Dynamics supplying an ever more intricate and expensive remote sensor surveillance system. There are also millions to be made running privatized prisons and immigrant detention centers, filling the coffers of firms like CoreCivic and the GEO Group, which have secured record profits in recent years while garnering about half their revenues from those two sources.

Last but not least is the market for even more police equipment. Local forces benefit from grants from the Department of Homeland Security to purchase a wide range of items to supplement the Pentagon’s 1033 Program.

Much has been written about America’s failed post-9/11 wars, which have cost trillions of dollars in taxpayer treasure, hundreds of thousands of lives (American and otherwise), and physical and psychological injuries to hundreds of thousands more. These wars have also propped up sectarian and corrupt regimes that have actually made it easier for terrorist groups like al-Qaeda and ISIS to form and spread. Think of it as the ultimate boomerang effect, in which violence begets more violence while allowing overseas terrorist organizations to thrive. As journalist Nick Turse has noted with respect to the militarization of US Africa policy, the growth in American military operations on that continent has proceeded rather strikingly in conjunction with a proliferation of new terrorist groups. Put the best light on them and US counterterror operations there have been ineffective. More likely, they have simply helped spawn further increases in terrorist activities in the region.

William D. Hartung is the director of the Arms and Security Project at the Center for International Policy. He is the author of Prophets of War: Lockheed Martin and the Making of the Military-Industrial Complex.