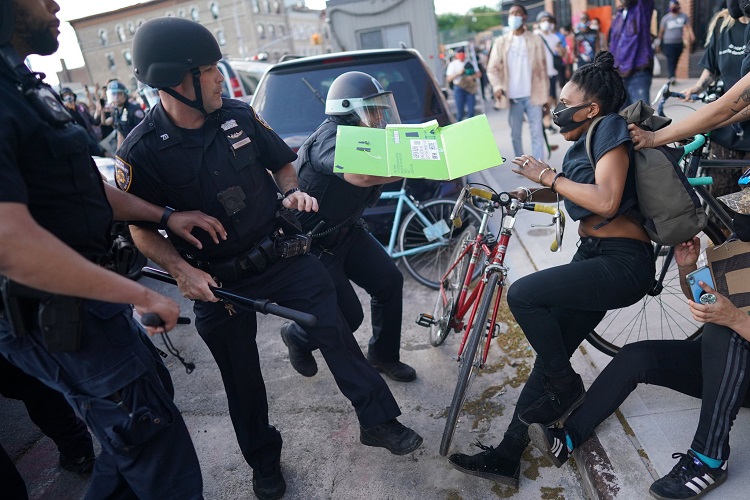 Body camera footage captured during recent demonstrations against police brutality has shown how cops often turn peaceful protests into riots by the way that they engage with the crowds.

A demonstration in Cleveland, Ohio, on May 30th shows a police officer pepper spraying a peaceful protester before the situation escalated into a riot.

In the video, an unidentified woman is seen standing on the sidewalk near a line of police officers, holding a sign that read, “give us what belongs to us in peace, and if you don’t give it to us in peace, we will take it by force,” which is a quote by Emma Goldman, an anarchist revolutionary that lived during the early 20th.

The women directly engaged with the police about their use of force on protesters and the general culture of violence among law enforcement.

She asked the police, “Are you going to tear gas me? For standing here with my sign and trying to have a conversation with you?”

As the woman was talking to the officers, another protester came up behind her carrying a sign. One of the officers said to the woman, “tell your dude down there he might want to put that sign down.”

Next, without warning, the officer shoots a stream of pepper spray at the protesters, striking the woman in the face.

When other protesters rushed to her defense, one of the officers said, “You don’t even know her!”

As the group was helping the woman, the officer claimed that the other person threw a sign, but at first was going to blame the innocent woman.

“She threw a,” he said, before correcting himself, “he threw a parking sign. You might want to tell your folks that.”

“That’s what I was trying to tell her to tell him to go get away with that sign. Just saying. Right?” he said defensively.

From there the tensions between protesters and police escalated quickly, with protesters throwing rocks, bottles and other projectiles and the officers, and police launched tear gas into the crowd and shot protesters with pepper spray balls.

When the woman got back on her feet she shouted at the police, “What did I do? I stood here. You watched it. I stood there, talking to you. And look at my face. I haven’t moved, and you f—–g burned my face.”

None of the police responded to her at that point, and the officer who shot the pepper spray has not been identified.

There is no disputing the fact that the protests were entirely peaceful before this moment. Afterward, however, it was chaos.

Naturally, the police union claims the peaceful protesters were just a distraction.

Jeff Follmer, president of the city’s police union, said that peaceful protesters stand in front to shield violent rioters as a “tactic.”

“He’s clearly going after the guy with the sign. The peaceful protesters that are in front is a clear tactic that these groups do to provide cover for the agitators,” Follmer said.

There is no evidence that the woman was coordinating with the man, or any indication that they knew each other.

Follmer also said that it was “OK” for police to pepper spray the wrong person as long as they intended to hit someone who was doing something wrong.

“It’s OK if the intent is going for the aggressor, which is the sign person. I do believe his actions were OK based on him going after the person with the sign first,” Follmer said.

However, the crowd was still mostly peaceful, and someone throwing a sign hardly justifies the level of force that was used by police.