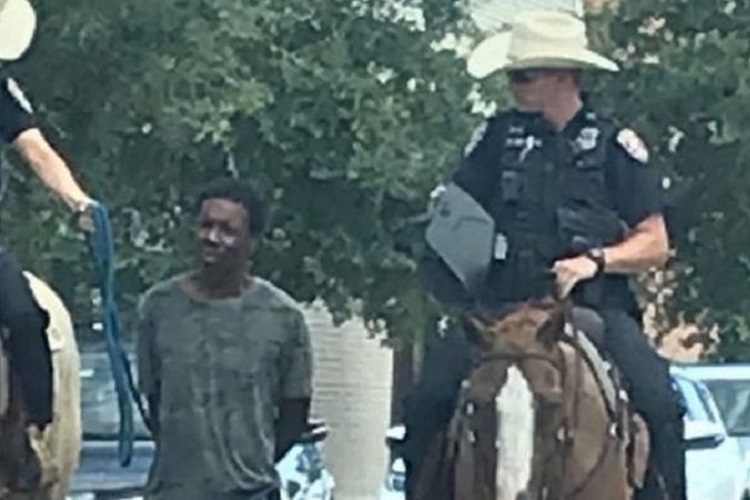 Galveston, TX — Last year, a picture of two horse-mounted officers using a rope to lead a handcuffed black man through the streets of Galveston, Texas, enraged the country and was slammed as racist and evoking memories of slavery. It was so bad that police did something they rarely ever do — issue an apology. But the damage done to the victim, Donald Neely, can not be fixed by contrite cops, he is now suing the Galveston police department for $1 million.

A petition filed this month in Galveston County’s district court called the officers’ conduct “extreme and outrageous” and claimed that it caused Neely injury, emotional distress and mental anguish.

“Neely suffered from handcuff abrasions, suffered from the heat, and suffered from embarrassment, humiliation and fear as he was led by rope and mounted officers down the city street,” the lawsuit claims.

According to the lawsuit, the officers should have known that Neely “being led with a rope and by mounted officers down a city street as though he was a slave, would find this contact offensive.”

What’s more, according to the lawsuit, Neely alleges that he was maliciously prosecuted. Indeed, all charges were later dismissed in court.

In August 2019, Police Chief Vernon Hale confirmed that the officers clipped a “line” to Neely’s handcuffs after he was arrested on a misdemeanor criminal trespassing. They were leading him to a mounted patrol unit staging area.

The original image ignited outrage online after it went viral, with many drawing comparisons to racist images and the era of slavery in the US. “Looks like they’re going to a slave auction,” one Twitter user said.

“This is 2019 and not 1819,” James Douglas, president of Houston’s NAACP chapter told the Houston Chronicle.

“First and foremost I must apologize to Mister Neely for this unnecessary embarrassment,” Galveston Police Chief Vernon Hale said in a statement. “Although this is a trained technique and best practice in some scenarios, I believe our officers showed poor judgement in this instance and could have waited for a transport unit at the location of the arrest.”

Police said the department has changed its policy to prevent it from happening again.

It said the officers, identified as Patrick Brosch and Amanda Smith, did not have malicious intent.

“All I know is that these are two white police officers on horseback with a black man walking him down the street with a rope tied to the handcuffs, and that doesn’t make sense, period,” Leon Phillips, president of the Galveston Coalition for Justice said. Phillips suggested that the officers could have stayed with the man and waited for a car, and called on the police to end the arrest technique.

Indeed, the officers themselves knew that as body camera footage would later show.

“This is going to look so bad. I’m glad you’re not embarrassed, Mr. Neely,” Officer Patrick Brosch said after his partner, Amanda Smith, clipped the line to Donald Neely’s cuffs getting ready to lead the black man through town from their horses. The man’s “crime” was sleeping under the awning of a building after getting off work.

The outrage online would prompt an investigation and the Texas Rangers were tasked with conducting a criminal inquiry into Neely’s arrest. The Rangers concluded, with the Galveston County District Attorney’s Office, that there was no basis for a criminal investigation.

“The city supports the chief in any actions he deems to be appropriate; however, if the investigation identifies deficiencies in department policies or practices those will be addressed directly with the Chief,” said City Manager Brian Maxwell in a statement.